Here are a few other vampires you might enjoy.

By now “Buffy the Vampire Slayer” is an international phenomenon. The show has completed its 5th season in the United States, and has generated a spin-off show, “Angel” which has been running for two years. My family have been fans for about a year and a half, thanks to my friend and former employee, Adrian Miller. 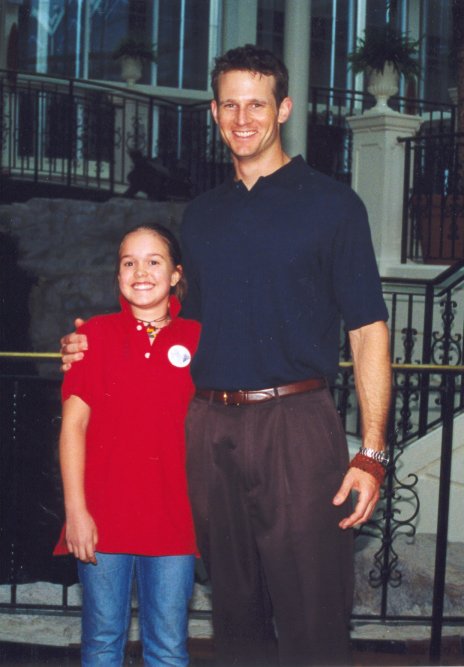 It’s also thanks to Adrian that we got tickets to the big Buffy convention held near London in June. If you’ve ever been to a Star Trek convention, or seen the movie Galaxy Quest, you’ll have an idea what these conventions are like (in fact, a lot of the same people go to conventions for Star Trek, Star Wars, Xena, and other sci-fi/fantasy shows as well as Buffy). I wouldn’t do this every year, but it was definitely a cultural experience.

In between lines, you can attend talks by the star guests, watch episodes of the show you have missed or want to see again, and – most importantly! – buy show-related merchandise from the sales booths.

There were quite a few star guests at this year’s convention, although Buffy and Angel themselves were not present. The guests included J. August Richards (Gunn on Angel), Andy Hallett (Lorne on Angel), Robin Atkin Downes (various monsters), George Hertzberg (big bad Adam on season four of Buffy), James Marsters (Spike on Buffy), Nicholas Brendon (Xander on Buffy), the three main make-up artists from both shows (Todd McIntosh, Dayne Johnson, and David DeLeon), Chris Golden (author of several fiction and non-fiction books about Buffy), and, best of all, Joss Whedon, creator of both shows.

What impressed me most was how hard all the star guests worked throughout the weekend. While we fans were standing in line, they, too, were on their feet: having their pictures taken with hundreds of fans, giving their talks, and spending hours at the autograph tables signing everything from photographs to books to toothbrushes.

Listening to and observing the guests, it was clear that these people work extremely hard, on average 14 hours a day throughout the shooting season (which seems to be nine or 10 months a year). Because the title character is a vampire, “Angel” is shot mostly at night, so the Angel cast and crew have the added stress of always being on the night shift. All the people involved with the shows clearly take enormous pride in the quality of their work, quality which can be seen on the screen – and they’re all having tremendous fun as well.

James Marsters in particular doesn’t seem to mind all the female attention he gets. One might accuse him of a slightly swelled head, but it’s also easy to forgive him, because he is clearly having so much fun being famous – no moans about the downside of fame here! And even idols have their own idols. James raved about how he had just spent several days with Roger Daltrey, who had even given him a guitar. During a Q&A session a fan asked him why he didn’t demand more lines in a movie. “First,” he said, “you don’t walk onto a set and demand more lines. Second, if there’s any opportunity to be in a film – even for a few seconds – with Geoffrey Rush, I’m going to take it!”

There is quality in the details of Buffy as well. The three make-up artists gave a demonstration: it took two hours each to reproduce two of the demon faces from the shows, plus one simple vampire make-up and one “glamourous” make-up. They mentioned that the soft foam rubber monster masks are each used only once. This a quality choice: in order to blend the edges of the mask invisibly into the actor’s skin, those edges must be very thin. It is impossible to remove the masks without tearing the edges at least a little, so if the same mask were re-used, its edges would be more visible when reapplied. Instead, a fresh mask is made every time, and the make-up is therefore as convincing as it can be – every time.

Most of the guests who came for the convention had taken advantage of their tickets to London to do some sightseeing, several bringing relatives or “significant others” with them. But they took time out from tourism to get together and celebrate a cast member’s birthday. I felt wistfully envious of the Buffy and Angel gangs: they work long and hard together most of the year to create some of the greatest shows on television, and they all seem to like each other. It must be fun. 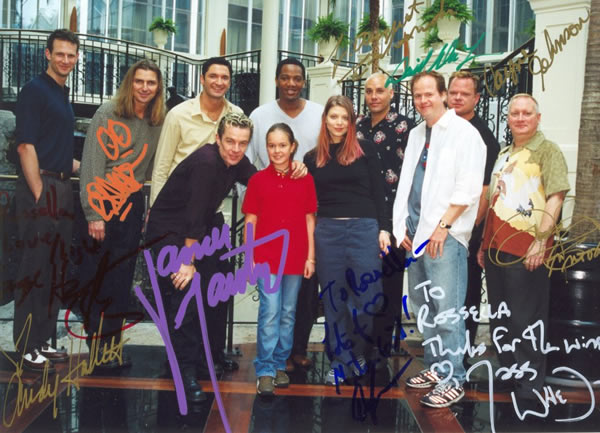 Even conservatives like Buffy: Buffy Is Here to Stay, National Review

What Women Want : Buffy, the pope & the new feminists

A teenager to get your teeth into: Bryan Appleyard on Buffy