Scuola materna (kindergarten) is a wonderful thing. In Italy, every parent has the right – though not the obligation – to put their child in preschool, free of charge, for three years, until they begin first grade in their sixth year.

Traditionally, this seems to have been regarded as a way to socialize kids to life outside the family, but the schoolday was kept short, on the assumption that mom was home anyway.

Nowdays, in many families both parents work, so most scuole materne offer full-time hours up to 4 pm, and after-school programs for parents who can’t pick up their kids that early. Essentially, this is very high quality, state-sponsored daycare.

Ross’s scuola materna was part of a loose cooperative of pre-, elementary, and middle schools, all set in a large park, with each grade level occupying its own small building. 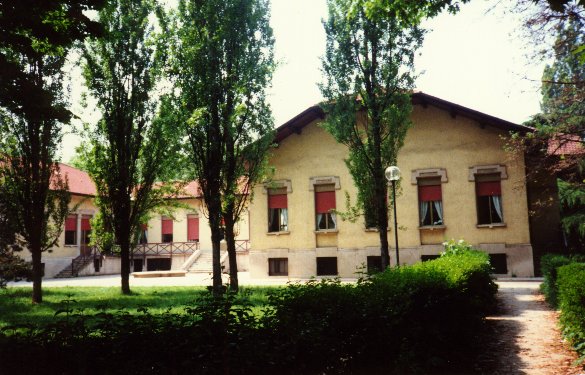 The park had originally been a track for trotting races, hence its name, Parco Trotter. In the early 1900s, it was well outside Milan, and sickly children were sent there to breathe clean air and take the sun. There had even been a swimming pool and a tall, airy gymnasium, though these and the dormitories are now ruined past repair. It had been a practical school, where the children tended gardens and raised farm animals as well as (presumably) studying the usual subjects.

Parco Trotter is now engulfed by the city, but remains an island of green among the gray cement; not surprisingly, it has a lower incidence of absences due to illness than any other school in Milan. The preschool kids spent a lot of time outside simply running around, as few kids in Milan are able to.

They weren’t expected to learn to read or write, but they did many pre-reading and pre-math activities, construction and art projects, and more – Montessori methods were very much in evidence!

They could be as messy as they liked outside with sand, flour, dirt, and rocks. The bathroom was designed for water play as well as other uses. They decorated their spaces with trees made of cloth, and their own paintings and other creations.

For one project, parents were asked to show the kids around their workplaces, which included a car repair shop and a bakery. Afterwards, the teachers interviewed the kids about what it meant to work, and wrote down the answers, such as: “Work means sweating a lot.” “No one likes to work, but if you don’t work, you starve.”

As preparation for the passage to elementary school, the kids visited elementary classes to see what the older kids were doing, and afterwards were interviewed about what it means to “get big.”

At all educational levels, school hours used to be organized so that kids went home at lunchtime. Offices, shops, and factories would also close, so the family would gather around the dining table for a midday meal. Apparently, many Italian parents of my generation grew up this way, and still aren’t entirely comfortable with leaving their children at school for lunch.

But, again, modern life intrudes: many mothers as well as fathers now work full-time, often so far across town as to make the family lunch together impracticable. The city government stepped into the breach with a school lunch program, usually prepared somewhere else and then trucked to the various schools. Parco Trotter is fortunate to have a kitchen on the premises, so the food doesn’t have to travel far. The quality was quite good, though they sometimes served vegetables that no self-respecting child was likely to eat, such as boiled fennel bulbs.

It seemed that many parents were more concerned about this aspect of their child’s education than any other. The teachers would furnish daily reports on how well the child had eaten, and there was a parents’ committee to oversee the kitchen. Several times we were called upon to sign petitions protesting this or that aspect of the kids’ diets. (After four years of legendarily bad food at Woodstock, and seeing that Ross ate more at school than she did at home, I had a hard time taking these seriously.)