Rossella’s middle school experience is no pleasure to think back on; in short: it was a mess. As I mentioned in my article about elementary school, we had thought that Ross was getting bad grades in elementary because she was bored, so we chose a challenging middle school, Milan’s grandly-namedÂ Educandato Statale Setti Carraro dalla Chiesa. It had been founded as a boarding school for the daughters of Napoleon’s officers (hence the old name, “Collegio delle Fanciulle” – girls’ boarding school – by which it is still known by many). Nowadays it’s a public school, but still housed in a beautiful oldÂ palazzoin the center of Milan. Well, beautiful for a school. TheÂ conte who built it had ambitions that far outran his cash, so after building this huge place he had little money left for the interiors. There is a lot ofÂ tromp l’oeil marble, as well as interesting ceiling frescoes in some classrooms, and several statues of Napoleon.

I don’t know how long ago it became public, but the school to this day runs by its own rules. Unlike most public schools, it is academically selective; Ross got in by being personally recommended by two alumni. It is also “integrated,” meaning that all grade levels are housed in a single facility with a single administration; this, too, is unusual. And it’s not fully co-ed: the school admits a few boys in the elementary school, but in middle school no new boys can enter (the school claims not to have the facilities for them), and there are no boys in high school at all. There are only four or five boys at each middle-school grade level, kept together in one class section; Ross ended up in the section with no boys at all. Which was probably all to the good: those few boys get way too much attention, and some of them come out with grossly swelled heads. A friend of Ross’, a boy one year older, happened to go to the same school, and Ross’ prior acquaintance with him was much resented by his female classmates, even though there was no romance in it.

Unusually for Italy, Setti Carraro has boarding facilities for a few students, but it’s all rather sad. Ross volunteered to stay there for two separate one-week periods, when Enrico and I both had to travel. She thought it an adventure, but the girls who were there year-round did not, and after Ross described it, I understood why. The boarding group was too small to form a community, and they didn’t have much opportunity to socialize outside of boarding, so it was a very dull life for them.

Setti Carraro prides itself on academic rigor and teacher quality. As I’ve mentioned before,Â it doesn’t take much to get qualified as a teacher in Italy (though that is changing), so teaching methods tend to be a combination of tradition and personal inclination. Many teachers rely heavily on rote memorization, which is easier for teachers, but not effective for many kids. Most Italian parents see nothing wrong with this, because it’s the way they learned themselves. No allowance is made for differences in learning styles or strengths.

We had attended a presentation about the school before selecting it for Ross. They told us then that the kids would be in school until 5 pm, Monday through Friday, but that lessons ended around 2:30, leaving time for a break and then study hall, so that by the time they reached home they would have no homework to do. This turned out not to be true. Some days they had classes until 4:00, and most days they came home with homework anyway. By the end of the first year, parents were protesting vigorously, but nothing changed, and we were told that this had been the pattern, year after year.

I am still trying to figure out what, exactly, “homework” means in Italy. My understanding of the term, based on experience elsewhere, is that it’s something you do on your own to reinforce or practice what you’ve learned in class. Here, however, the kids were often told to study something entirely new on their own at home, and often needed their parents’ help to absorb new material. The books were not always helpful, being written in a heavy academic style that even I found hard to follow (though I read general Italian very well). We spent hours tutoring Ross, and this is the norm for many families. I don’t know how families with multiple children are expected to cope.

Homework was also assigned for most vacations. During the summer between 6th and 7th grade, we spent several hours a day for the entire month of August helping Ross with homework, or at least trying to keep her on track to get it all done. This did not make for a relaxing vacation for anybody.

Ross’ grades continued poor through 6th grade. We hoped that, after the first year, things would settle down, she’d get into the demanding rhythm, etc. She was very conscientious about getting her homework done (and remains so to this day – one good outcome of this school), but it was never enough.

I attributed her ongoing woes to culture clashes, teaching styles, “could try harder”, whatever – grasping at straws, really. By February of her 7th grade year, I realized that there had to be something else going on. We had Ross tested by a child psychologist in Milan, and it turned out that, while extremely intelligent (no surprise there), she has some problems in concentration and memory – you could call it borderline Attention Deficit Disorder, but we didn’t bother to pursue a definitive diagnosis. The label would do her no good in the Italian education system, which barely recognizes dyslexia, let alone more “exotic” learning problems. (In the Italian press, ADD is widely reported as something that American parents invented so they could drug their children into passivity.)

This is another hole in the Italian system which makes me crazy: very few teachers have any training in recognizing or coping with learning disabilities. It’s likely that some things are overdiagnosed in the US, but many lives have been ruined by the failure of educational systems to recognize or address real problems. Ignoring learning disabilities is certainly not the answer.

I tried to explain Ross’ problem to the teachers, without much success. It was hard enough for me, motivated as I was, to figure out different ways of presenting information so that she could absorb it more effectively. Teachers with little training and no motivation weren’t likely to get far, and most of them didn’t try. In the end we all agreed that it would be best for Ross to go to a less demanding school for 8th grade. 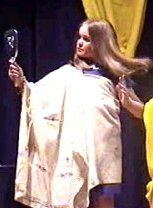 The one area in which Ross was able to shine at Setti Carraro was acting. The best teacher they had (and she was very good) believed in drama as a form of literature, and a way of learning literature. In 6th grade, they studied Greek myths, and did a series of short plays based on myth. Everyone got at least one major role, but Ross was a particular hit as Cassiopeia, the vain queen who brings down the curse of Venus. It was also noted, and duly exploited, that she learned everyone else’s lines as well as her own – no memory problems there, interestingly. In 7th grade, they did excerpts from “Orlando Furioso,” where Ross played Sacripante, a Sancho Panza sort of character, wearing a pillow for a paunch, and stomping around in my oversized Tibetan boots.