While out on a walk (which became a hike), I saw a couple of women heading into the woods with wicker baskets dangling from their backpacks – off to hunt for mushrooms. Italians, like hobbits, are very fond of mushrooms, especially the varieties which defy cultivation and can only be found in the wild (or bought, expensively, from someone else who found them). 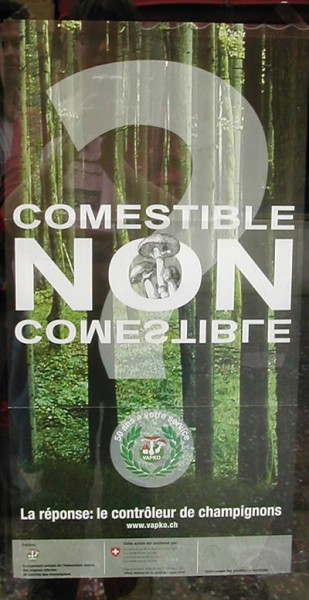 ^”Edible or not? The answer: the mushroom checker.” A pharmacy sign in Switzerland.

To ensure that the mushrooms they pick are edible, many Italians have taken courses or otherwise learned how to distinguish various types. If you’re not sure, you can go to a pharmacy to have your catch examined – I guess pharmacists have to have some sort of mushroom qualification. Still, every now and then someone thinks they know more than the pharmacist does and ends up poisoning their entire family (usually not fatally). The wild mushrooms you buy in stores are certified safe, I presume.

But mushrooms have other ways of taking revenge on the humans who seek them so avidly. The mushroom courses apparently don’t include tips on how to pick them without killing yourself, so every year, during mushroom season, people fall off cliffs while out ‘shrooming. This past weekend saw one death, one serious injury, and two people needing to be rescued from whatever situation they’d got themselves into on a mountain somewhere; this morning’s local paper announces another death – all in quest of mushrooms. I think I’ll stick to buying them at the store.

NB: The mushroom shown at top is of the “DON’T eat me” variety.

an American student in Viterbo on ‘shroom love