ceiling of a small chapel – this must have been recently restored, as we did not see it on our previous trips to Bormio, and there was no explanation anywhere in the room, though there were display cases seemingly ready to hold text of some sort

In the evening we went out again for snacks and beer at a pub, which got very rowdy with a large group of young men singing largely incomprehensible songs. We never did figure out what tribe they belonged to, but one song went “Ocker, ocker, ocker, viva i pizzocher’ !” Only in Italy would a drinking song be an ode to the local pasta specialty: pizzocheri, buckwheat pasta cooked with potatoes and greens, then baked with cheese, garlic, sage, and butter. 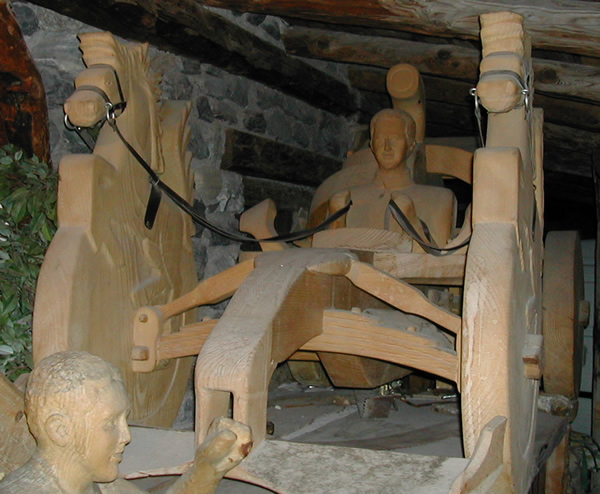 During our walk, we saw outside a restaurant called Rasiga these fanciful carvings of Schumacher with his Ferrari cavallini (horses) and Valentino Rossi, the motorcycling champion 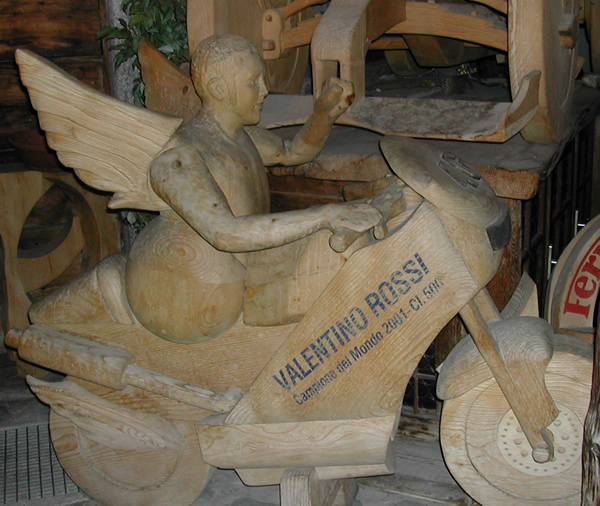 The next morning we got up in good time for our included breakfast, then drove up to the Bagni Vecchi (Old Baths), a few hundred meters above the town. We had been warned to reserve in advance because the Bagni Vecchi were likely to be crowded while the Bagni Nuovi are undergoing restoration. We got there half an hour before our reservation time of 11:00, and then they couldn’t find our reservation, but they let us in anyway.

external view of the Bagni Vecchi showing the outdoor (hot water) pool next to the old chapel. To the right is the main spa and hotel building.

The price has gone up considerably: at 35 euros each, it’s well over twice what we paid on our last visit to Bormio, and a ten-percent discount voucher from our hotel did not do much to ease the sting. Oh, well. All good things must go up in price, I suppose, and, the once a year or so that we manage to go, we can afford it.

Once we had checked in and paid, we were given a token to get a locker key and a package containing tubes of bath gel/shampoo and body lotion. Then we went along to a desk where a lady gave us big white bathrobes and towels, and plastic flip-flops (presumably sterilized for our use); you pay a 5 euro deposit for these.

The locker rooms are unisex, with curtained booths where you change into your bathing suit (forgot your suit? apparently you can buy one embroidered with the crest of the Bagni Vecchi, though I did not inquire about price). After changing and stuffing our clothes, coats, and bags into the (smallish) lockers, we strapped our locker keys to our wrists, and away we went.

Our first stop was perhaps the oldest part of the baths, a dark, steamy, echoey tunnel carved into the living stone of the mountain. The tunnel splits, with one side ending in a spherical steam room with stone benches, the other trailing even further back and filled about four feet deep with hot water. In deep winter, due to some weird thermal effect, this water is almost unbearably hot (even for me, who adore very hot baths), but the surrounding earth wasn’t frozen enough yet last weekend, so it was merely pleasantly warm.

We then went on to Enrico’s favorite feature, the outdoor pool, which is constantly refilled with fresh hot water from an open wooden trough running along three sides, with close-fitting wooden spigots. It also has several kinds of Jacuzzi jets. But the best thing about the pool is that you’re floating in hot water enjoying this view: 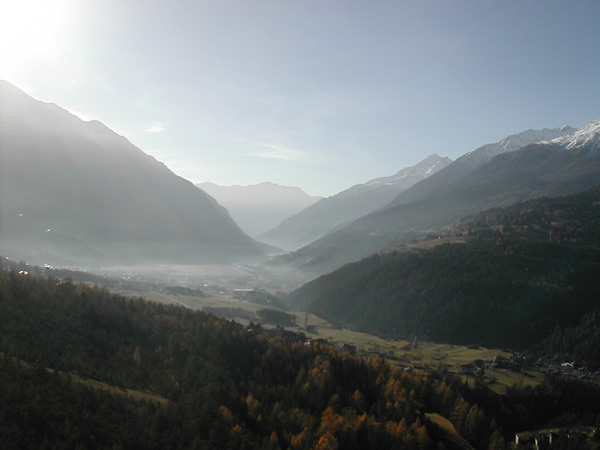 (There used to be a great webcam view of the pool, but it was taken down a few years ago, perhaps for privacy reasons.)

My own favorite feature of the Bagni Vecchi is “Garibaldi’s baths”, a long stone pool in a cavernous dark room, with three waterfalls crashing down five meters or so from near the ceiling. You can sit under these waterfalls and get an excellent massage on your head, neck, and shoulders, and the water was the hottest in the entire spa that day.

There are also saunas – two small, traditional dry ones, and one larger with a view (the “Sauna Panoramica”), and two new large ones which are more like wood-panelled sweat rooms – I liked these even better than the dry saunas. (I was also fond of the mud baths that these have replaced, but apparently I’m in a minority on this.) There is a “chromatherapy” room with stone walls, where you lie on a divan and watch colored lights change while listening to “soothing” music – I didn’t bother with this. Several other “relaxation” rooms are scattered throughout, but I have a bone to pick with whoever thinks that shrill pipe music, however New Age, is soothing!

Apparently the Bagni Romani (Roman Baths) that used to cost extra are now included in the package, but we forgot to go to them – they’re basically rooms five feet deep in hot water. We also never made it into the standard Jacuzzi-style pools; we managed to fill three hours going back and forth among the aforementioned features, plus some time just lying in the sun in our damp bathing suits and bathrobes (which we should not have been able to do in late November! global warming?).

By 1:30 or so we were thoroughly waterlogged and relaxed, and I was getting hungry. We showered, changed, returned out towels etc., dried our hair, and went to the spa’s café for a snack of fruit and yogurt.

The road to the Passo dello Stelvio starts just beyond the turnoff for the Bagni Vecchi, and it was already closed for the winter – which seemed odd, considering how little snow had fallen. So we were able to take a walk up the road, completely unmolested by cars.

I was puzzled as to why so many pine trees had turned yellow. Surely that can’t be normal? 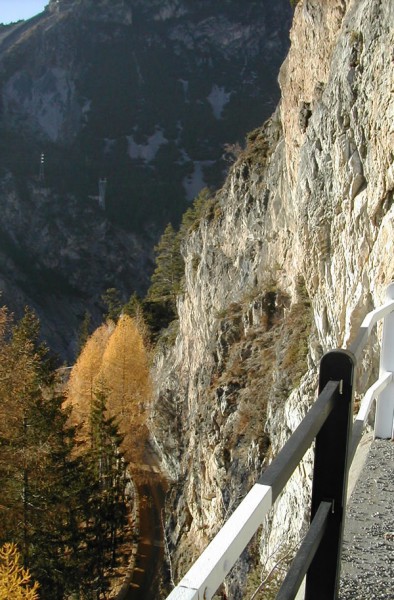 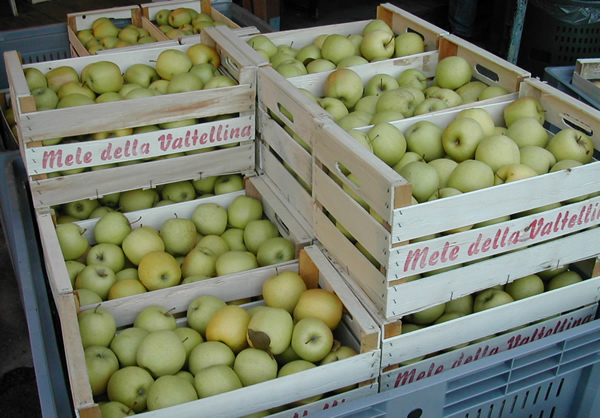