At the newstand: the book K2

Two tourists injured on the ski slopes in Madesimo

*Teleriscaldamento, available in some Italian towns, recovers heat from power stations and pipes it into homes. 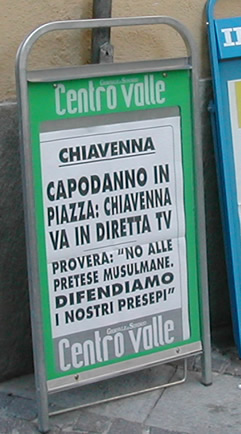 New Year’s Eve in the piazza: Chiavenna live on TV

Provera [says]: “No to the Muslim demands. We’ll/let’s defend our nativity scenes.”

Dec, 2006 – There were a few stories around Italy (though not, I believe, in Chiavenna) about nativity scenes being removed from schools after protests from non-Christian (not necessarily Muslim) parents. Provera, whoever he is, evidently tried to make political capital out of this.