Family portraits have been on my mind because, during our January visit to my dad and Ruth, I received an unusual birthday gift: a photo session at Venture “New Generation Portraits,” a UK-based franchise with a new approach to the photo studio business. Dad and Ruth had had their portraits done a year ago, and had so much fun doing it that they gifted sessions to Ruth’s sister and brother-in-law, and now to me and Ross. I had seen Dad and Ruth’s pictures, and knew that we were in for something different from the usual stiffly-posed studio portrait.

Before we left the house, Ross did an excellent makeup job on me (as well as herself). I ordinarily never wear that much makeup – wouldn’t have time or patience to put it on every morning even if I knew how – but it looked great.

We were told to choose clothing that we felt comfortable and looked good in. There’s a dressing room at the studio and you can change as many times as you want during a session, but in the end we didn’t bother: we chose one outfit each and didn’t bring any extras (to the photographer’s surprise – she said girls usually bring lots of changes).

Once in the studio, the photographer (an energetic young woman named Lucy) asked us (and Ruth) questions about ourselves, our relationship (“are you cuddly?”), and what we wanted to get out of the session. We didn’t really know, mainly just wanted to see what it was like and have fun, and let Ross see how a (different kind of) professional portrait photographer works. I looked forward to having a nice photo of myself for a change: Ross rarely photographs badly, but I am not nearly so photogenic or comfortable in front of the camera.

The business end of the studio was a big white space with studio lights. We took our shoes off, then Lucy had us get physical: sitting on the floor and pushing our backs against each other, tickling, and combat-crawling on our elbows towards the camera (Ross won that race by miles, which isn’t surprising – that’s how she always crawled as a baby): 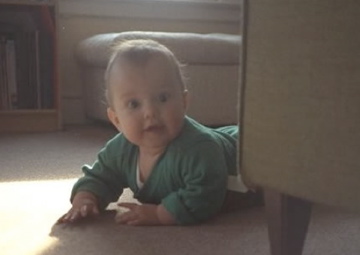 Lucy asked if we would dance, but Ross wouldn’t dream of dancing in front of her mother and a camera, and the music wasn’t sufficiently inspiring (we could and should have brought our own).

Lucy did things with the lighting: red, purple, and blue bounced off the wall behind us. We did some individual shots. For me, she set up the lights to halo my head from the back so you could get the full effect of my hair which, when it’s behaving the way my hairdresser intended, fluffs up like a dandelion – so we did one with me “tearing” my hair, which came out very funny.

The photo session took an energetic hour, and we knew we’d gotten some good shots. We had an appointment to come back two days later to see the results – Ruth had begged them to schedule it in quickly so we’d be in time to choose our photo before we headed back to Italy on Monday. They gave us a price list to study at home, which only confirmed what Ruth had already told me: all I can afford right now is the 8×10″ that comes with the gift voucher. Prices after that start at 169 pounds for a 5×7″! And go up well into the thousands for the poster-sized and multiple jobbies encased in lucite – which is clearly where Venture make their money.

So we knew we would have to choose only one picture. (For now: they keep the photos on file for two years, during which time you can always go back and order more prints, though I winced to hear that they store them on CDs, a medium with which I have long experience and very little trust.)

The photo viewing was an emotional experience, complete with a box of tissues ready to hand. Out of about 80 photos that had been shot, we looked at 40, projected onto a wall. In the first pass we were unusually ruthless and got it down to about 20, by discarding the ones in which either looked less than perfect.

None were standard studio portraits – all had been manipulated in some way with Photoshop, for example adjusting the colors to blue- or violet-toned black & white, or bleaching out features to emphasize the eyes (Ross complained that in one shot her nose almost disappeared). They were shot and/or rotated to unusual angles, and some were designed to be printed in a widescreen format.

I liked the combat crawl shot, with me far in the background as Ross lunges towards the camera. I felt it was symbolic of my supporting role in her life: I’m there to stand behind her, whatever she wants to do. But it wasn’t so great as a portrait of us both.

There was an outstanding model shot of Ross, but then, it’s easy to get outstanding shots of Ross.

Ross liked one in which I stand skeptically looking on while she jumps in the air, kicking up her heels. Again lots of fun and very symbolic, but it would be better as part of a tableau with one or two more serious shots.

The one we ended up with is shown at the top of this article.

(The intrusion in the lower left corner is a ceramic tile from Castelli that is propping up the picture on a bookshelf til we figure out where it will live permanently.)