Reader Stefano Tonti sent me this photo. The headline says “Doctor beaten with a shovel”. ata is a suffix you can add to many nouns to create a word meaning “an application of [noun]”. Badile = shovel or spade, so someone applied a shovel to this poor doctor (unfortunately, we didn’t buy the newspaper so we don’t know why). A more common construction is sassata, stoning – as in, throw rocks at – sasso = stone. 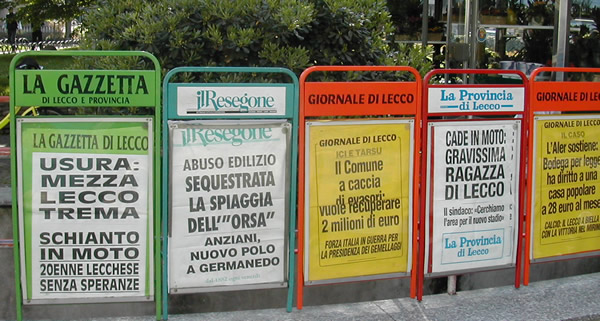 Usury [loan sharking]: half of Lecco trembles / Motorcycle crash – 20 year old Lecchese without hopes [of living – in fact, she died]

ICI [property tax] and TARSU [some other tax] – The municipality on the hunt for tax evaders: wants to recover two million euros

Forza Italia [political party] at war for the presidency of the “twinnings” [?]

Falls while on motorcycle: grave [seriously hurt] girl of Lecco

The mayor: “We’re looking for the area for the new stadium.”

Soccer: The Lecco [team] goes to Biella with victory in its sights