“Texting” – sending text messages via cellphone – has been popular in Italy far longer than in the US, in part because it’s cheaper than calling. When I can’t reach someone by email, I use SMS for non-urgent communications – it’s less intrusive than a call, and I have a phobia of disturbing people.

Italian kids in particular text a lot, though many have now moved on to instant messaging on their computers. They’ve developed a shorthand which is useful for both; I give some examples here (and will expand on them as I run into new ones, particularly with illustrations).

The graffito on the side of the building pictured above reads: Cecy TV1MDB… Fabio.

TVB – ti voglio bene – “I love you” – predates cellphones; I remember my daughter and her middle school friends scribbling it on each others’ school diaries and backpacks. (The advertising applications for TVBLOB are instantly apparent.)

The graffito above is another variant: 1 is (obviously) uno, the number one, but it’s also the article “a” or “an”. So this reads: Ti voglio un mondo di bene – “I desire for you a world of good,” or “I love you a lot.”

Cecy, BTW, pronounced CHAY-chee, is a nickname for Cecilia [cheh-CHEE-lee-ah]. 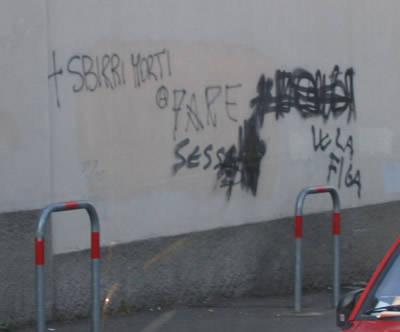 + is of course the mathematical plus sign, pronounced piu’ [PYOO]. But piu’ also means “more”. So the ugly sentiment expressed above is “more cops dead.”

At the bottom right is the VV symbol meaning “hurray for!” – figa (cunt). (A rather pleasanter sentiment.)

(For which I don’t yet have photos.)

k – The letter k is pronounced kappa in Italian (the name is Greek because k is not actually part of the Italian alphabet). But Italian kids, knowing that in English it’s pronounced [kay], use it as shorthand for -che, a common Italian syllable.

x – This is not the letter x, but the multiplication symbol, called per in Italian. The word per is also a preposition meaning “for”, and, again, a frequently-used syllable in Italian.

what are some more Italian SMS abbreviations I’m missing?