Saturday morning I got up bright and early – way too early, considering that I had barely slept Friday night (jet lag – I had just returned from Colorado Thursday). Succumbing to travel paranoia, I took a taxi down the hill rather than wait for the first bus at 7 am, and got to Lecco station in time to catch the (late) 6:47 train to Milan. Which may have been wise, since the later train I’d been planning to take was also late. As it was, I got into Milan over an hour before the 9 am train to Bologna on which I and several other FemCamp participants would be travelling.

I had breakfast (coffee and a croissant), and discovered some newly-restored corners of Milan’s Stazione Centrale.

The station was crowded with people, many headed out for a weekend at some beach or other. Eventually I spotted Sara, and we soon met up with Michelle. My friend and colleague Lisa met us in the station as well, but she had to take a later train as the one we were on was sold out. The rest of us, including three women from Style.it, had all booked seats in the same train car, but weren’t sitting together, or so we thought. But by some weird logic of numbering, I found that my seat 86 was next to Susan’s 82. Which was great: we had a good long chat (she had said she wanted to take a nap, but I rudely preferred that she stay awake – I was afraid that if I gave in to sleep, I would never wake up).

Although we made the entire journey together, including the walk from Bologna station to the site in via San Felice, I never actually talked to the Style.it women; they didn’t introduce themselves, and they seemed such a compact gang that I was shy to intrude (had Mafe been with them, it would have been different – I already knew her from the Girl Geeks Dinner). Oh, well. I had plenty of good conversation with the others, in a random mix of Italian and English.

Arriving at the site (the HQ of TechneDonne), we were startled at the number of people present, and even more at how many were men. Seeing the attendee list on the wiki, we had already been perplexed at the intent of so many men to participate in what was billed as a women’s event. The guys seemed nervous, however: during the early part of the day they milled about, talking and taking pictures mostly among themselves (to the extent that the photos on Flickr show far more men than women!).

Women were only a slight majority at the camp. Nonetheless, a presenza femminile so much larger than at most tech events seemed to cow the men. Later in the day they warmed up and mingled better – I guess they figured out that we weren’t going to bite them (a disappointment for some?).

There were lots of congratulations for Lele, recently hired to be the official blogger for Cisco Italy. Quite a coup for the Italian blogosphere: blogger goes corporate (our very own Robert Scoble). I reflected that I was hired two months ago to help the storage software group at Sun Microsystems with blogging (among other things); evidently I have failed to capitalize on the self-promotion value of that! 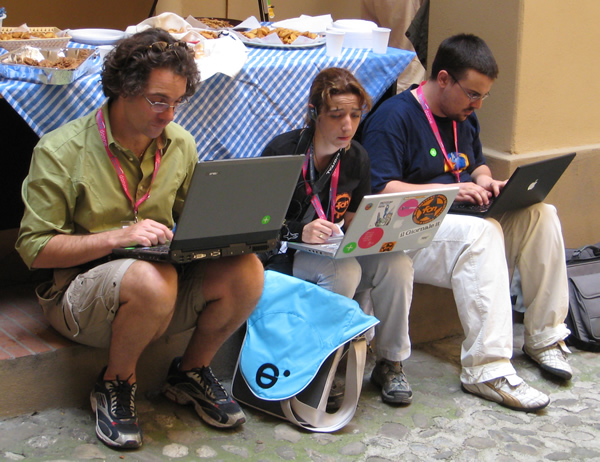 The presentations began almost on time (only half an hour late, for a barCamp in Italy, is a near-miracle), but I did not attend any in the morning. Not that they weren’t potentially interesting, but I was enjoying talking with friends new and old in the courtyard, and the interiors were crowded. Everyone else complained of the heat, but I had seen Susan’s warning on Twitter that the forecast for Bologna that day was hot and sunny, so I was dressed entirely in linen, and very comfortable. 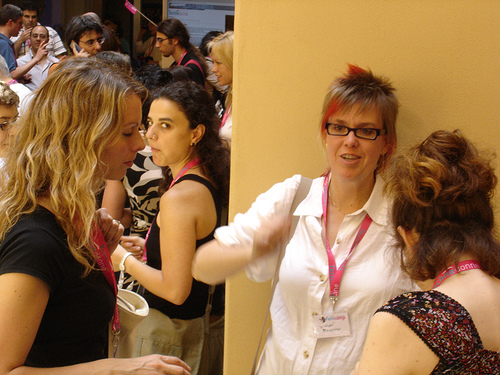 photo by Luca Moretto shows off my new hair to advantage.

Amanda on the left, Tara on the right. I don’t know the identity of the person with the skeptical expression in the background.

I’d just had my hair done the day before. My hairdresser had proposed blonde streaks to lighten up for summer, but I dismissed these as unnecessary – my hair will lighten up by itself in the sun. But somehow Ross persuaded me to do something radical. She’s certainly an influence on my style!

Lunch, as usual, was provided by San Lorenzo. Thanks to the vagaries of jet lag and the half dozen or so coffees I’d already had, I wasn’t that hungry: I ate mortadella, salame, porchetta, bread, a few olives, and, later in the day, biscuits. Then went for more coffee. I didn’t dare touch the wine, or someone would have tripped over me sleeping in a corner of the courtyard. 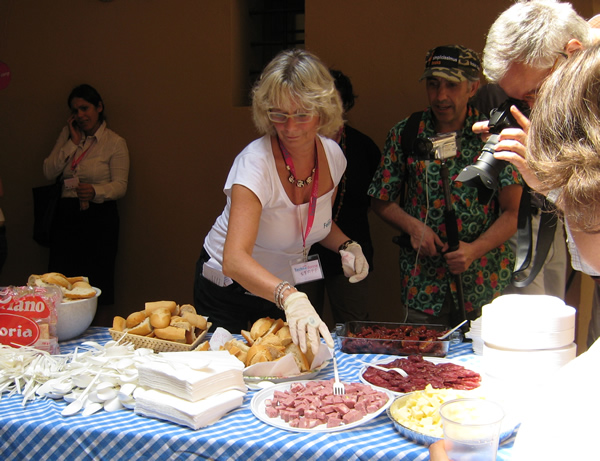 Glamour magazine is getting its tech on lately: the photographer I’d already met at Girl Geeks and RitaliaCamp was present, setting up all sorts of shots. Here, again, is the lovely (and very smart) Amanda: 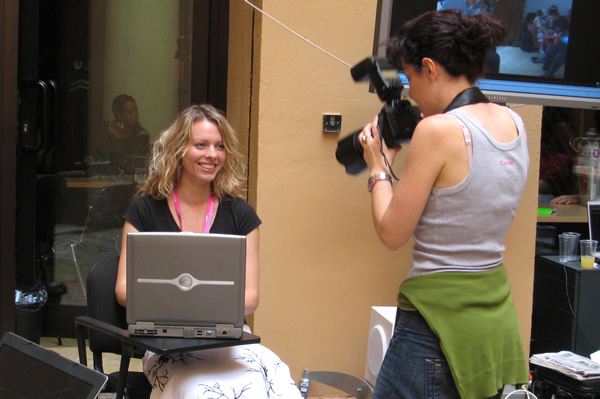 “You Can Always Go to a Startup”