Though Rossella is by and large a wonderful young woman and a joy to be around, she does have her teenage moments and attitudes. She doesn’t like to wake up in the morning, her floor is usually strewn with clothing, she is undisciplined about studying… I sometimes reflect ruefully on the fact that my parents missed out on many of the pains and joys of my adolescence: I spent it most of it away at Woodstock School.

The idea of sending your child away to school is anathema to many parents (and perfectly normal to others, depending on culture, class, and family history), but it can be a fun and useful experience for the teens themselves. They become self-regulating and independent because they simply have no choice. Many common teen habits cannot be tolerated at boarding school – some forms of behavior would simply be impossible to manage en masse.

You Gotta Get Up…

Living in a dorm means responding to bells: bells to wake up, bells to go to meals, bells for showers, bells for lights-out, bells for emergencies, and of course there are the school bells throughout the day. When the morning bell rings, you had better roll out of bed on your own, because there’s no mother there to keep coming back to nag you. If you persist in lying in bed, you’ll miss breakfast, and if you’re late for school, there are consequences. Needless to say, this is useful discipline for later working life. 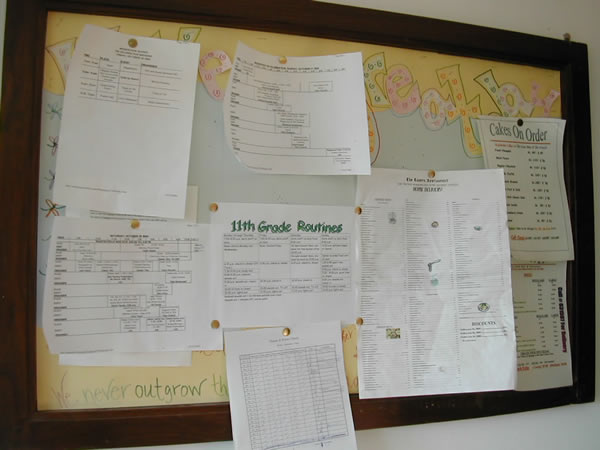 the routines of dorm life

When I was at Woodstock, dorm rooms were inspected once or twice weekly and, if we left them messy, we got demerits that could add up to gating (a punishment that meant not being allowed to leave the dorms for anything other than classes for weeks or months) or restricted to campus (no bazaar on Saturday!). Being thus forced to clean up after ourselves was good training for any teenager, especially those who had servants to do everything at home (as was common in Asia at the time).

(Tidiness doesn’t seem to be quite as enforced as it was in my day. At least they matched Ross with an equally messy roommate.)

My parents never had to argue with me about pocket money. We had a (very small) set allowance at school – I think the maximum allowed during my senior year was 100 rupees a month. This amount was equal for everybody, and there was (at least in theory) no way to beg parents for extra if we had spent it all before the end of the month. In that situation, you learn to spend carefully – another very useful life lesson.

I suppose all boarding schools have specific times set aside for studying. At Woodstock in my day it was 1.5 or 2 hours after dinner, four nights a week – if I remember correctly, we had a shorter study hall on Wednesdays to allow time for a social activity afterwards. Any free periods during the school day were also designated as study halls, which you did in the library under supervision (it was a Senior priviledge to be allowed to study anywhere on campus).

If you were on the A or B honor roll (3.5 or 4.0 grade point average), you could do evening study hall in your room rather than in the dining hall. A teacher would come around once or twice to check that we were each in our own rooms, but otherwise it was up to us to use the time wisely.

Even if we weren’t used to having chores at home, we had to take care of some things at school ourselves, such as laundry. Not washing it ourselves, but bundling it up each week for the dhobi (washerman), with a checklist of how many of each item we were sending, then checking it in again and chasing down anything that was missing when the bundle came back. If we needed clean clothes next week, we knew to make sure they got into the wash this week. (Or, preferably, the week before – clothing takes a long time to dry in the monsoon.)

We had to take care of our clothes and our possessions, replace things that needed replacing, etc. – again, no mom around to notice that all your socks have holes in them and your t-shirts have all gone gray.

Living in a dormitory with 100+ other kids, well, you’d better learn to get along with people. For starters, we all had at least one roommate, and the rooms weren’t huge, so you had to respect others’ personal space, and learn to find privacy when you could. I tended to need a lot of time to myself, so most days I would go straight down to the dorms after school, when others were off doing sports etc., so I had at least my room to myself.

Here I’m thinking mainly of food – an obsession of growing teens, the more so in any institutional cooking situation where the meals are… well, probably not like Mom makes. The downside is that you learn to eat fast, so that, if there is anything good on your plate, you can go back for seconds before stocks run out. You can often spot a boarding school survivor by this behavior: he or she is the one waiting impatiently for a post-dinner coffee while the rest of the party are still on their salads!

The upside is that, while you deeply appreciate good food, you’re not a fussy eater, and can survive on just about anything when you have to.

Living with parents, teens are always testing boundaries: “Why do I have to be home at a certain time? What do you mean I’m too young to go to the disco?” This struggle for independence is an important part of teen development, but exhausting for parents, who receive conflicting advice from the entire world (“Be stricter! Be more understanding!”) and may not agree even between themselves on what’s to be done.

A boarding school has set rules that everyone knows and must live by. It’s clear why the rules need to exist, even when they are more restrictive than you might have at home: it’s far more difficult to keep track of several hundred teenagers than one or two.

At school, there’s not much leeway to argue about the rules, and the penalties for infractions are clearly stated and (usually) fairly applied. So it’s up to you, the student, to decide whether to risk breaking the rules, and you know exactly what to expect if you get caught. Boarding school in this way is a good introduction to adult life: you learn early that you are responsible for your actions.

A young person leaving boarding school for college is likely to be far more mature in many practical ways than his or her peers who come straight from home. One Woodstock classmate of mine said that he felt many of his college classmates wasted their first year simply getting accustomed to being on their own, whereas he was able to be productive from Day 1.

Last but not least, boarding school teaches us humility: instead of being Mom and Dad’s pampered darling, we each have to pull our own weight in the community – which includes aiding and comforting our peers when they need it. We learn to take care of those around us, and that it is natural and human and right to do so.

And that’s not a bad lesson to be starting life with.

Why Send My Child to Woodstock School?

2 thoughts on “Growing Up in Boarding School”