Famed Italian blogger Luca Conti (pictured at top right, showing off his Nokia to Sara Piperita) has pulled off what many bloggers dream of (and quite a few actually do, in other parts of the world): making a living by blogging. Or, at least, managing to get paid for various kinds of consulting (as a result of his blogging) while also running around the country blogging various interesting events he now gets invited to, plus other perks like fancy cellphones. The Italian PR world has figured out that bloggers are influential, and is courting them assiduously – or at least a small fraction of them. I am jealous that Luca’s job now includes boat trips on the Amalfi coast but, hey, it couldn’t happen to a nicer guy. (And I’ve got nothing to complain about: my own professional life is shaping up interestingly lately…)

Whenever Luca comes to town there’s a dinner (Pandecena), and these are excellent occasions for social and professional networking (aka lots of conversation with people I enjoy). This dinner was particularly well-populated because it had been scheduled for the night between the two days of a conference called Web 2.0 Oltre (Web 2.0 – Beyond) being held in Milan at which many of the “usual suspects” of the Italian blogosphere were panelists, speakers, etc. No one in the room had actually paid to attend the conference, for the excellent reason that it cost 1600 euros to do so!

I’ve been using Twitter lately (not today – stuck til I get my password fixed), which breeds an odd sense of familiarity with people I’ve barely met, and, having seen something day-to-day of how their minds work, it’s fun to then spend some face time. One such person at this event was Marco Formento, but the photos I got of him were scary…

I also enjoyed meeting Madga of Spotanatomy, a fun and insightful blog about advertising that has been referenced on this site before. 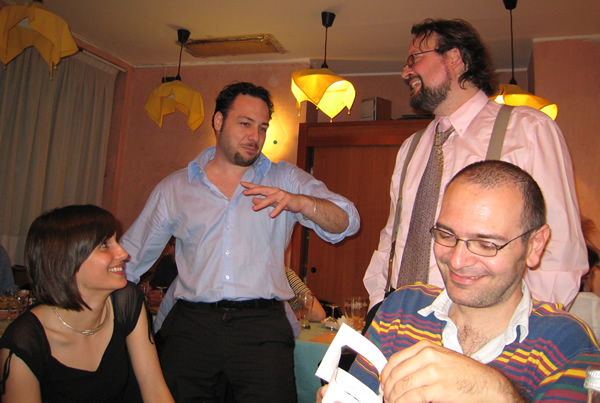 ^ A woman I didn’t meet, Emanuele Quintarelli, David Orban, and Marco Palazzo of DueSpaghi, an Italian social network about restaurants. The structure of the site is due to be translated soon, but that doesn’t help with the meat of the matter, the actual reviews. Translation is a thorny problem for websites. It’s so hard (and expensive) to do it well. 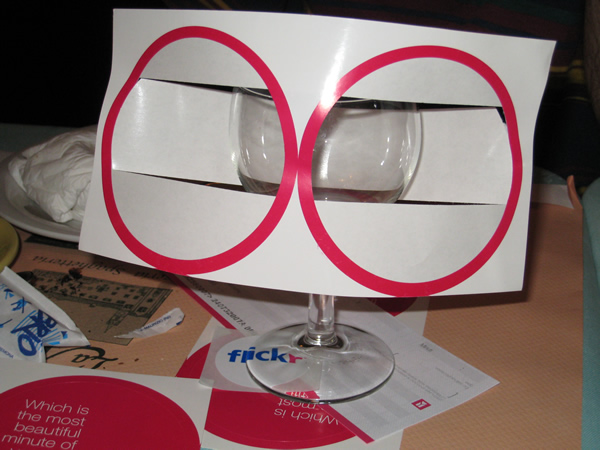 ^ Marco had fun with some PR stickers. 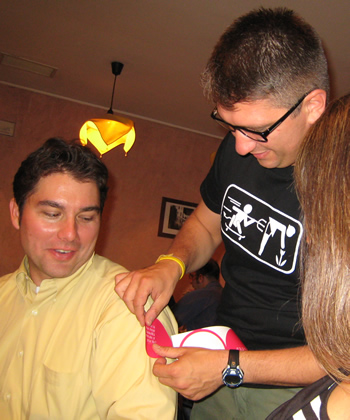 ^ Thomas Christel, a Chicagoan now living in San Benedetto del Tronto, gets tagged by Lele. How one earth did he end up in San Benedetto, you may ask? (And I did.) The usual story: married into it. But he’s managed to keep a high-tech career going, in addition to running a B&B: Thomas is an executive for Yoo+, an online project management application now in beta testing. 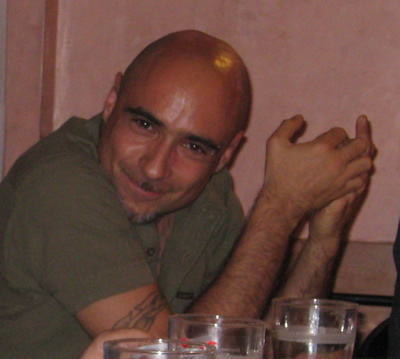 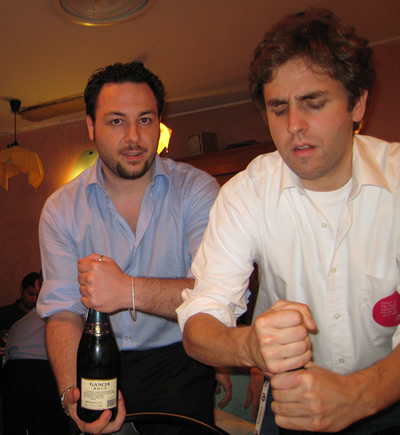 I did have a bone to pick with Emanuele. He was (one of? chief?) organizer of the Web 2.0 Oltre conference, which somehow did not manage to feature EVEN ONE WOMAN speaker in two days of talks and panels. I had noticed (and been irritated by) this lack on the Web 2.0 Oltre site months ago, but didn’t know then who was responsible.

later – Emanuele tells me there were three women on the stage: Daniela Cerrato (who was in the original program and I must have overlooked her – my bad), Anna Masera (who was added after I saw the program), and a manager from Renault who spoke about that company’s recent push into Second Life.

I had had a battibecco* with Emanuele a few months ago in his own blog comments about the Italian Web 2.0 boys’ club he (and others) organized. He now came over to ask whether I was happy with the presenza femminile at this dinner.

I counted. Maybe ten women out of 40 people. Not great.

“Is that our fault?” he and David Orban asked.

No, not directly, obviously – anyone who wished could join this dinner. But the women aren’t coming to these events, and we need to figure out why. For starters, about that conference of yours…

Emanuele said something about not knowing any women who could have spoken.

“I’ve been online for 25 years,” I said. “And am now a Senior Web Producer for Sun Microsystems.” At which point he asked for my card.

I probably came off as bitter and aggressive in this exchange – a woman making her points strongly always risks being labelled a bitch. So be it.

I don’t believe that Emanuele (or Lele, who also recently had a restricted-invitation event to organize, and somehow ended up with very few women) is a chauvinist (or, as Italians would say, anti-feminist). But there’s a dangerous mindset in which, when you’re drawing up a list of influencers and experts to consult, invite, etc., somehow the people who come to your mind are all male. Women aren’t consciously excluded from your thinking, but… they don’t end up on your list either, do they? And that perpetuates a vicious cycle in which men are publicly identified as the experts, and women remain on the margins, waiting to be invited to the dance.

Well, I went to a school where anybody who wanted to, got out on the dance floor and danced – both literally and metaphorically. And I am by now too old and wise and bitchy to play the wallflower.

So, ladies, it’s time to do something about it. In October I will be hosting Web Women Weekend, at my home in Lecco. It will be an opportunity for girl geeks / technedonne / web women to get together, have fun, and figure out how we can support each other. (Invitation only, so, if you’re a woman in technology in Italy, let me hear from you.) 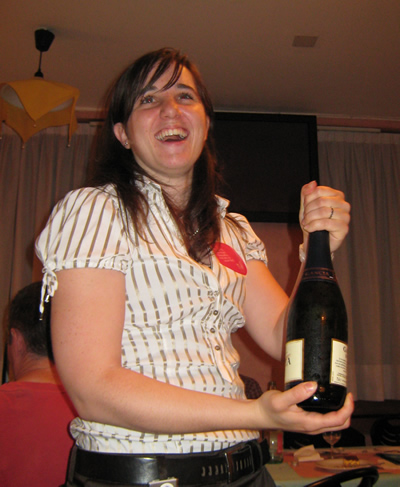 And that will be something to celebrate. 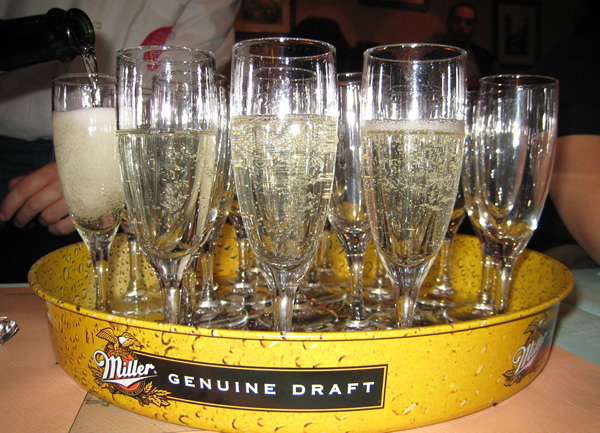 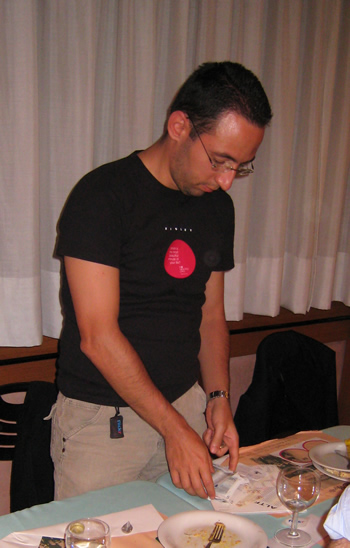 ^ Coda: I took this picture just so we could start a nasty rumor that Luca only organizes these dinners because he makes money on them.
; ) – just kidding!

What do you think? how do we get more visibility for women in technology in Italy?