The starter was panzanella di pomodoro con scampi di Fano – tomato and bread with local scampi on a bed of arugula. As chef Lucio explained, this is a recipe inspired by the “fishermen of the hills” – those who, while owning a fishing boat down on the coast, live up in the hills, where they also have enough land to grow their own produce. Because they are farmers as well as fishermen, their cooking combines the flavors of the sea with those more traditionally associated with the countryside.

Whatever the inspiration, it was divine. I crave more of that stuffing-like panzanella bread, and would like to explore uses for it in other formats. If memory serves, with it we drank a Gavi di Gavi docg 2005.

Then came Pasta di farro Latini con Sugo di Scorfano
dellâ€™Adriatico: penne made from spelt flour with a sauce of local scorpionfish. Sara told me that Latini brand pasta is supposed to be the best in Italy. I was sitting next to Sara’s French husband, Patrice, who agreed with me that he couldn’t really tell the difference between one pasta and another. Several of the Italians at the table stated categorically that there is a difference, but you have to be raised on pasta to appreciate it properly.

It was served with tiny sides: the rolled-up things on the left seemed to be sort of piadine (the Italian version of “wrap” sandwiches) with ham and cheese inside. On the right you see three strips of delicately batter-fried fish filet – I would have been happy to eat a lot more of that. 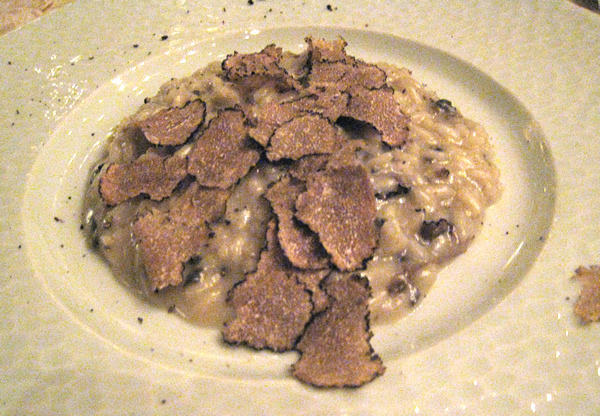 Next came Carnaroli Gran Riserva con Pecorino e Tartufo
Nero – risotto with sheep’s milk cheese and black truffle (that’s the black-edged stuff you see in slices over the top). I have not in the past been crazy about truffle, and feared this dish would be wasted on me. It was not. It was the best risotto I’ve had in my life, and two of the Italians in the group said that, as natives of regions specializing in risotto, they could testify that this was “un risotto come si deve” (risotto made the way it’s meant to be).

Wine with the pasta and risotto was Vernaccia di San Giminiano docg 2005.