For the secondi (entree course), Sara had decided to challenge her guests with a Degustazione di Frattaglie. Degustazione means “tasting” or “sampler”. Frattaglie are… innards. (I believe in English they are sometimes called euphemistically “sweetbreads”.)

This used to be considered peasant food: the parts of the animal left over after the nobles had taken the choicer muscle meats (haunch, shoulder, filet, etc.). There are traditional dishes based on organ meats in probably all Italian regions. Next-door Abruzzo, for example, features la mazzarella, a mix of organs including (I’m pretty sure someone told me) lung. Trippa (tripe) is traditional in Rome, the Veneto is famous for fegato (liver).

It was clear from the menu that Symposium’s recipes would take these “poor” foods and dress them up in grand style. I still wasn’t sure I would like them, but I decided to be brave (those who chose not to try the frattaglie were served rabbit).

Shown above is the first sampler plate:

Once again I donated to my neighbors, though we were all getting very full by this time.

This course was served with a very good Pinot Nero Alto Adige doc 2002. I don’t have particular skills in describing wines, but I know what I like: heavy, complex reds like this one. It was nobody’s fault that one bottle was corked; in fact, this provided an opportunity to demonstrate what Enrico and I learned years ago in a Slow Food wine-tasting course: women’s noses are far more sensitive to corked wine than men’s.

It was also the occasion for Chef Lucio to talk about how he loses 5% of his stock this way, and synthetic corks would be better for everybody, but market tests have shown that customers make the snobbish (and wrong) assumption that real cork is more elegant. (In our wine course we learned that the most effective way to seal wine would actually be a cap like you find on a beer bottle – I can just imagine the howls of outrage from wine snobs about that!)

There was plenty of time between courses to digest, and watch the preparation of the next course, which reminded me of demonstrations in a science museum as it involved liquid nitrogen.

This was used on a dish called Gorgo: Gelato al gorgonzola malghese, granita di sedano, pere calde padellate con la sua acquavite, salsa al porto: ice cream made of gorgonzola cheese, with a celery granita (the liquid nitrogen was used to instant-freeze celery liquid for this), pan-sauteed pears with pear liqueur, and port sauce. There were also granules of port gelatin and slivers of celery. (I didn’t manage to get a comprehensible photo of this creation, in spite of trying three different camera settings.)

If you approached this dish expecting dessert flavors, it would be a rude surprise. If, instead, you prepared yourself for a cheese course perfect for a hot summer night, it was wonderful. I ate it with bread.

With this we had a rather wonderful passito (a sweet dessert wine made from dried grapes) called Ramandolo docg 2003. It was a lovely amber color (see below – that’s Susan hiding behind), and was not cloyingly sweet as passiti often are. Must arrange to have more of that one of these days… 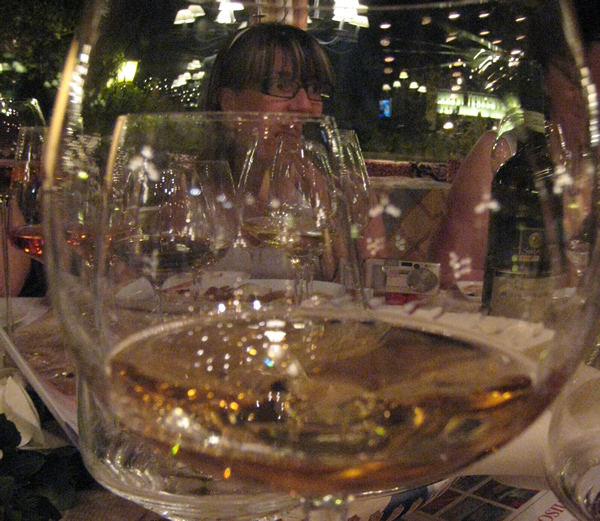 We also had a mini-sampler of two local cheeses, one goat and one sheep, each served with a dollop of well-mated fruit sauce.