I was one of a lucky group of people to win a dinner offered by San-Lorenzo.com as part of its marketing initiative Il Vino Lo Portiamo Noi (“we’ll bring the wine”). So what if the dinner took place halfway across Italy in le Marche? The Symposium Quattro Stagioni is one of Italy’s top restaurants, and the company at table seemed likely to be as enjoyable as the food.

My friend Susan was one of the group, so we travelled down together in the train from Milan Friday afternoon. Our friend Sara Piperita, the event organizer, was on a train that was supposed to leave earlier, but ended up leaving later. This did not bode well, as we were supposed to meet her in Fano to catch a ride to Cartoceto, the village where the restaurant is located.

We ended up waiting two hours outside the station in Fano, as Antonio Tombolini, head of web marketing for San Lorenzo, got stuck in traffic coming to get us. Travelling in Italy in summer can be absolutely miserable, no matter what means of transport you choose.

We reached the village with just enough time to check into our B&B and take showers, and change before we caught a ride to the restaurant with Roberto and Ludovica. The establishment proved to include lodgings, and a pool with a marvellous view.

As we waited for the group to assemble (18 people in all), chef/owner Lucio Pompili led tours of the wine cellar.

He explained that the bottles are wrapped in plastic to preserve the labels: a 1000-euro bottle of wine can lose 30% of its value if the label is ruined, and still more if it has suffered evaporation loss. (If the wine was 1000 euros good to begin with, I personally would not give a damn about the label.)

Sara’s husband Patrice, who recently qualified as a sommelier (in addition to his day job as a chemist), was in his element. 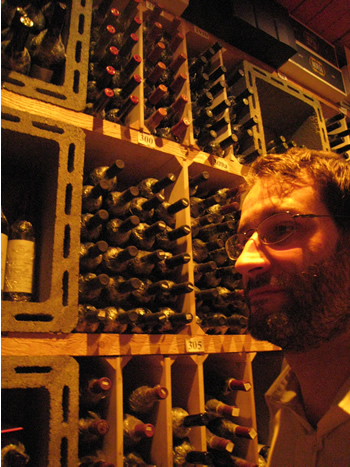 One thought on “San Lorenzo Dinner at the Symposium Quattro Stagioni: Arrival”