Abuses Past and Present

Enrico, Geraldine, and I decided to visit a museum. The only exit from our apartment was now under water. I had gone back for two more pairs of boots, but there’d been a run on them that morning, and none were left in Enrico’s size. So he improvised with the heavy plastic bags the boots had come in. Fortunately, the only area we had to walk through water was this stretch right outside our building. I felt like a kid, splashing through the puddles in my boots.

We went to Ca’ Rezzonico, an ancient palazzo stuffed with antique furniture, frescoes, statuary, and paintings. Turning the corner to enter a room, I was startled by a marble bust of a woman, head lolling, eyes half closed, mouth open as if panting or moaning, breasts spilling out of her clothing. At first glance, this seemed to be an allegorical excuse for a portrait of a woman in the throes of orgasm. Then I noticed the wound on her marble breast, flowing with marble blood. The martyrdom of saint somebody-or-other, evidently. But it still looked to me like a squirm-inducing juxtaposition of death and sex. A suspect proportion of classical art depicts voluptuous, bare-breasted women being kidnapped, tortured, or killed (or already dead). 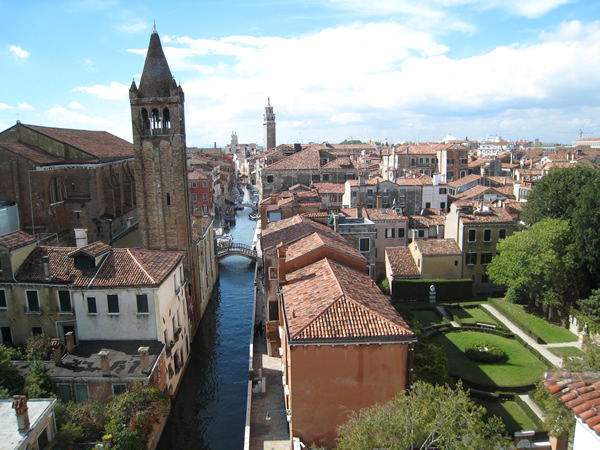 ^ view from Ca’ Rezzonico (taking pictures inside not allowed)

Ca’ Rezzonico also features a set of four ebony statues of life-sized “Ethiopian warriors”, and several smaller statues of African slaves. You know they’re slaves (and not, perhaps, an appreciation of a different kind of racial beauty) because they all have iron chains around their necks, draping down to the ground. Huge chains. Unmissable. Nothing subtle whatsoever: these statues celebrate the ownership of other human beings.

Italy bemoans the fact that it is no longer the world’s top tourism destination. But, goddamnit, Italy isn’t even trying to make itself particularly welcoming to tourists. For example: every painting in Ca’ Rezzonico had a tag with the artist’s name and dates and a title – all in Italian. What would it cost you to translate those titles? Make it just a little easier for the foreign tourist to enjoy? Each room had a single laminated sheet of text to explain – very inadequately – a vast array of fascinating objects. (We were with Geraldine, an art expert in her own right, so were far better off than most.)

Italians are justifiably proud of their national heritage of artistic and cultural treasures, and know a surprising amount about them. Pity they don’t go out of their way to share their knowledge with visitors.