While we were all in Venice, Jeet’s friend and Andrew’s colleague, Umberto, wanted to take us to his favorite restaurant in the nearby village of Campalto. The restaurant’s card says Solo Pesce (only fish), and that’s all we had – lots of very, very good fish, most of it local and extremely fresh. Umberto and his friend Mauro ordered for all of us, and at the risk of a bad nautical pun, I will say that they went overboard.

Pictured above is the amuse bouche of smoked fish, which was served with Franciacorta (champagne-method wine made in Italy). 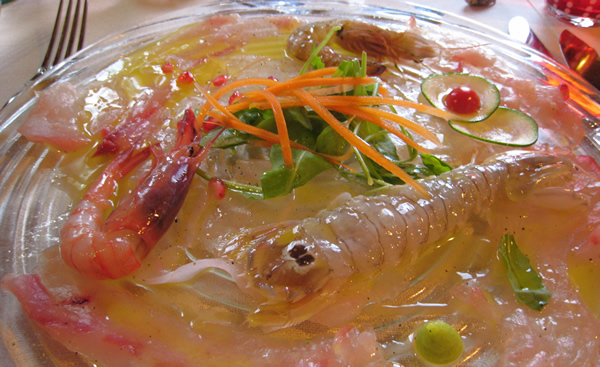 Then we had an antipasto crudo (raw antipasto). The object in front that looks like it has two big black eyes is a cavalletto di mare (sea grasshopper). These things have always looked creepy to me. The “eyes” are defensive mimicry – that’s actually the tail – and they have way too many little legs underneath. But I ate it anyway, and the flavor was divine – sweet, and the flesh slipped right down without being slimy. The plate also contained two kinds of shrimp (not raw) and some kind of fish (swordfish?).

I didn’t get a picture of the other antipasto, carpaccio di tonno (because I was too busy eating it): very thinly sliced raw red tuna, served almost Japanese style, but with olive oil. On the plate was a small mound of green stuff; I put a chunk of it in my mouth before I realized it was wasabi, which I’ve never seen served in an Italian restaurant before. Ouch! 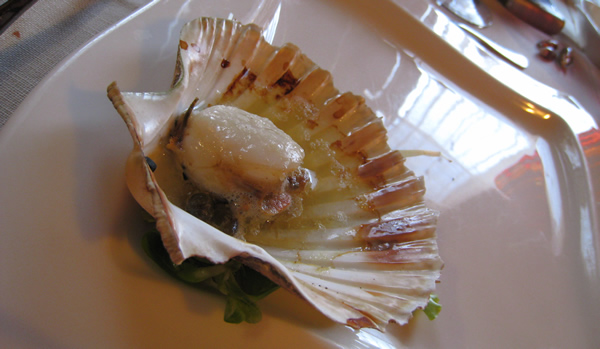 Next we had cappesante (scallops), grilled, then served on decorative shells. Apparently this is not the season in which they are large. Didn’t matter – they were tasty! 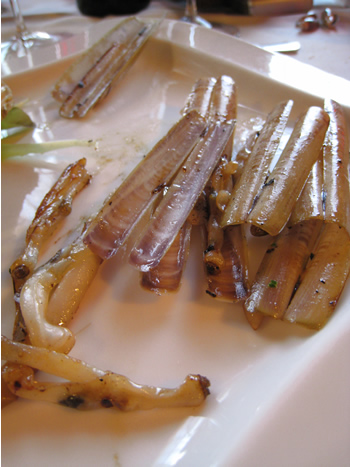 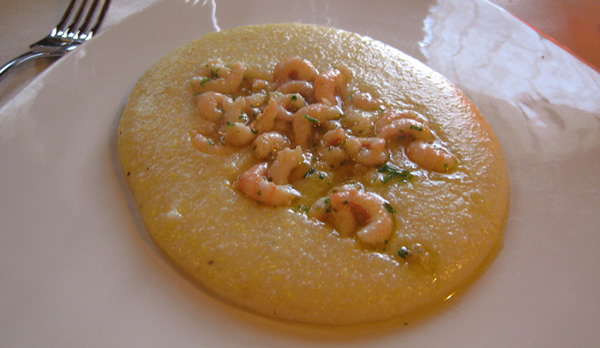 Then we finally got to the primi, first polenta with schie, the tiny and flavorful local shrimp. (We did wonder who peeled all these little bitty things.) 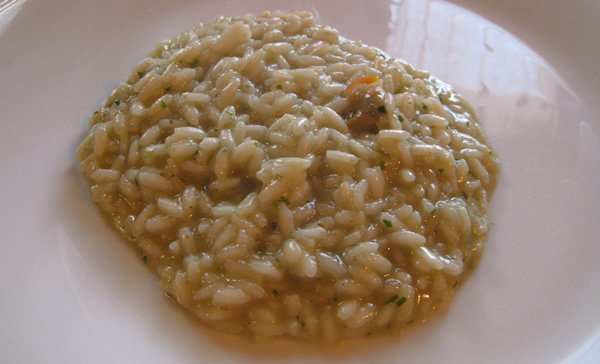 And, finally, risotto with clams. Fortunately, someone had thought to cancel the order for a pasta dish as well, and we hadn’t ordered any entrees. All this took a long time, which we didn’t mind as we were eating and drinking fine things in good company. Pictured above are Enrico, Kiki, Hadi, and Geraldine (shown reacting to a bad joke, not asleep on the table!).

We paid about 65 euros a head for “only fish” (plus quite a lot of wine, coffee, a few desserts, and limoncello) – well worth it!