^ top: the finer points of CSS – Tara and Elena in my kitchen

Increasingly frustrated with the low visibility of women in technology in Italy, back in June I and a few like-minded ladies hatched a plan to start doing something about it.

The first step was to get together. So I invited them all up for a weekend at our house (sent Enrico off to visit his mother – yes, he is a supportive husband!).

Turnout was not as large as I had hoped (the house could have slept 14 or so), but those who came were motivated – most had to be, to trek all the way out here.

Friday night it was just me, Tara, and Elena. It had been a long week for us all, so we ate dinner, watched a movie, and went to bed.

The next morning I woke up early (as usual) and got to work cooking (while my computer was compressing video for Sun). Tara and Elena eventually wandered in and set up their laptops on the kitchen table, working separately and together on this and that. It was oddly comforting to have them there while I cooked (usually a lonely activity for me); I’d like to have girl geeks in my kitchen more often!

The crew gradually assembled and introduced themselves:

There were the expected horror stories:

So, yes, there is plenty for women in IT in Italy to be unhappy about. But we didn’t get together just to bitch. The point of the weekend was to discuss what we can do to help ourselves, each other, and the larger community of girl geeks in Italy.

Under Sara Rosso‘s (welcome) leadership, each of us described what we hoped to get out of this event. These included: 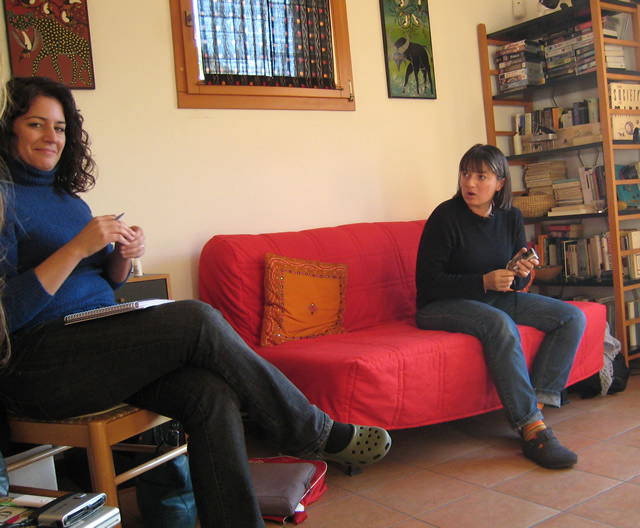 Sunday morning the first-round attendees left, to be quickly replaced by:

More useful experiences and information were shared (as well as an Indian lunch that I cooked).

At the end of the two days, we had some next steps:

Possible projects for the community:

Having this nascent supportive community of women in IT is already proving useful. Had I met Bruna a year ago and talked with her about some Italian IT companies she’s familiar with, I might not have been so much in despair about my job prospects in Italy. Celia said that, had she known us three years ago, she might not have abandoned the web business she enjoyed (and in fact she’s now thinking about getting back into it!).

Your thoughts and contributions welcome!

“You Can Always Go to a Startup”