When we moved into our apartment in Milan in 1991, we were young and just getting started in life – which is code for "didn’t have much money". Our furniture all came from Ikea, with supplementary storage: the old trunks we had shipped our stuff in from the US. 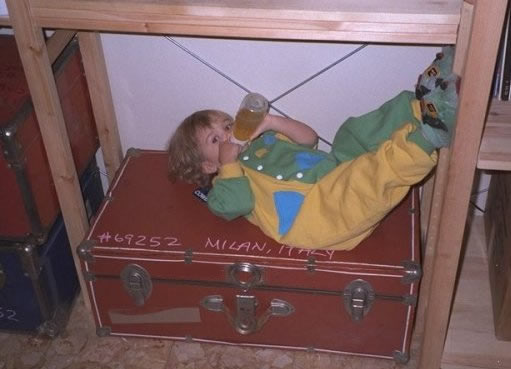 Our light fixtures for years were the same bare bulbs on wires that had been present when we bought the place. Once you’re accustomed to the fierce, unobstructed glare of a 150-watt bulb, it’s hard to get used to lower levels of light.

But, over time, we gradually upgraded some of our cheap furniture to get more storage space, Enrico got a new piano, and real light fixtures slowly began to appear. Each choice of a new one was agonizing. When we replaced the final bare bulb with a real ceiling lamp, sometime around 2001, we joked: "Now the house is all finished – we’ll have to move!"

And, not too long after that, we did move. The thirteen years we had spent in that apartment in Milan was the longest I’d ever lived in any dwelling in my life (which might be the case for Enrico as well – his family, unusually for Italians, moved quite a bit when he was young). We were no longer accustomed to change. Perhaps that’s why we were in a hurry to feel settled in our new apartment in Lecco, and had it completely furnished, including ceiling fixtures, in record time. Of course we then had to move again.

We’ve now been in our house for three years, and, once again, it was unpacked and looking very finished, very quickly. But it’s a big place; there’s always room for improvement.

Some time during the second year we finally replaced the last temporary light fixture, in the entryway. There had been no reason to rush: it had a big white-glass globe bulb, and almost looked intentional. Except that Enrico tended to point it out to any visitors complimenting us on our lovely home: "Yes, but we still have to find a light fixture for that…"

So finally one day he came home with this: 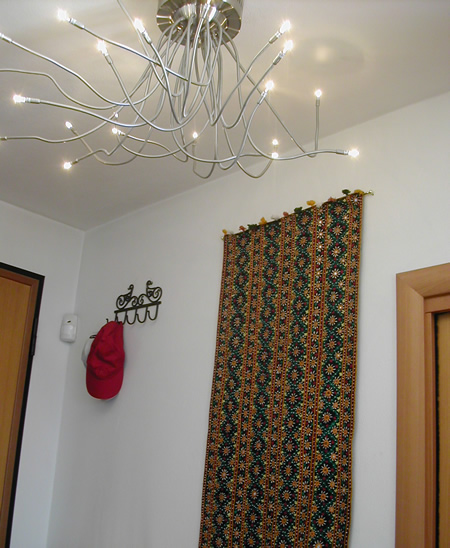 It’s even local, made by a company in Lecco called Leuci. High coolness factor: you can position the tentacles any way you want.

The hanging is Indian; I won it at auction at the Woodstock reunion last summer. We still needed a coat rack for that corner – always useful by an entry – and Enrico found this adorable wrought-iron one in a small town in the mountains during one of his hiking excursions. (No, Italians don’t usually wear baseball caps – I use them to keep the sweat out of my eyes when gardening.)

More recently, we hung a beautiful tapestry (handcrafted by a women’s cooperative in Gujarat) that my classmate Sara brought us – stunning piece, see the detail at the top of this page. I moved next to it a watercolor of the Mussoorie hills done years ago by my Woodstock art teacher, Kathleen Forance, which had previously been overlooked and neglected in a hall corner.

…and I can think of lots more things to do to the house (not to mention the garden). My stay with Gianluca and Brian in San Francisco was inspiring: Brian’s trained as an interior designer, and it shows in their beautiful place. I’ll have to steal a few ideas from him. And I plan on some serious shopping during my upcoming India trip.

But we’ll never call this house "finished" – if we did, we would have to move again.