When we finished seeing the palazzo, we had a little stroll in the garden, in which an intricate, manicured geometric hedge is winningly juxtaposed with overgrown and out-of-control everything else. My favorite photo of the day is above – autumn red vines draping down a stone plaque. The boast of the garden is a glorious, ancient cedar of Lebanon. I wish I owned a tree like that one. 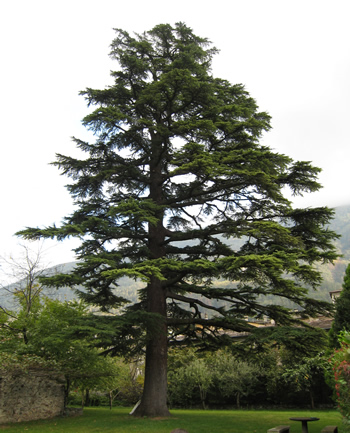 Then we were invited inside for the wine tasting. A large party of retirees occupied the canua (a semi-underground kitchen/taverna) usually used for tasting, and they didnâ€™t look like leaving anytime soon, so we had to improvise. Pancrazio helped carry a table and chairs from another part of the palazzo…

…and we sat in an anteroom full of antique winemaking implements.

…and two others that I don’t now remember – I’m a very disorganized wine reporter! “I don’t know anything about art, but I know what I like.” I liked these. And I was very pleased to be given six bottles of the Canua to take home as wages for my translation.

There was also bread, cheese, and salame – had we known to expect that, we could have skipped lunch (though that would have been a pity to miss).

The Sertoli Salis winery is well worth a visit, both as a historical site and, of course, a place to try and buy some great wine. Tours can be arranged in English.

Lecco: Between Lake Como and the Alps