Although it’s hot here in the summer, Italy’s not big on air conditioning, preferring to rely on older methods for keeping cool.

Most Italian buildings are naturally insulated, being made of concrete, brick, or stone. The older they are, the thicker the walls, which of course adds to the insulation. Windows are protected by shutters, whose style varies with location and age of the building. These insulate against the weather, but also protect against thieves (housebreaking is far more common here than street mugging).

Our apartment in Milan had tapparelle: slatted, roll-down shutters operated by a pulley system with a cloth strap that you pulled, hand over hand, to raise or lower them. This was barely within the limits of my strength on our large bedroom window, even though the shutters were made of plastic – we were on the 7th floor, so security wasn’t much of an issue.

My in-laws’ apartment in Rome, being on the first floor, had to have strongtapparelle. The originals were elegant wood, but, when they began to break down with age, this proved very expensive to replace, so the new ones were steel painted a woodish sort of color. Those were even heavier than the wood, so we were thankful for the electric motor that raised and lowered the 3-meter-widetapparella in the living room – until the electricity went out… 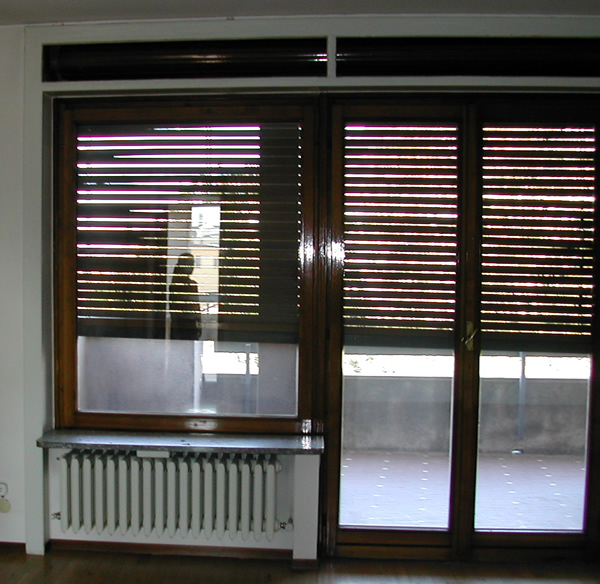 ^ Wooden tapparella on our first apartment in Lecco – operated by a hand crank (not visible in this picture), it took forever to open or close. Then the slats started breaking…

The problem with tapparelle as a safety feature is that, to be safe, you have to close them at night – clever Italian house thieves have been known to use sleeping gas on homeowners to ensure easy pickings inside the house. So the shutters in Rome had to be closed, no matter how hot the night. The most you could do was leave them slightly open so that a centimeter or two of air could pass underneath and through the slim cracks between the slats.

Back in Milan, surrounded by other 7th and 8th-floor apartments, we closed thetapparelle for privacy, except on a few summer nights when we were too hot to care if the neighbors saw us naked in the moonlight (it was too hot to wear clothes or have sheets over us on the bed, either). We found a partial solution in putting a new type of frame on the bedroom tapparella, which could be tilted out on a hinge even when the shutter was fully rolled down, so we could get air in under it, and look down into the street, but no one could look across or down into us.

Here in Lecco, most houses have persiane – hinged shutters with fixed, louvered slats pointing downward, so no one can see in, but you still get some light and air. We don’t feel the need to close these most of the time, even though we don’t have curtains: the position of our house is such that no one can look into our windows, unless they use binoculars. But the persiane are useful to keep the sun out while letting air in. On summer afternoons I close everything up on the sunny side of the house – shutters and windows – and the rooms stay relatively cool til the evening breezes come and it’s time to open it all up again.

Note: Yes, we also use fans.