15: trying to start Girl Geek Dinners in CO Front Range. Don’t know when I’ll actually be around to attend…

On the road again. I suspect I live to travel

Made a surprise trip to California to help out at an all-hands meeting (Solaris Software) in Sun’s Menlo Park (MPK) office. Met with colleagues about two different media hosting sites.

Flew to Albuquerque to meet Enrico, who had given a seminar at the UNM math department. We ate dinner, then drove to Las Vegas, NM, to visit Sharon and Steve and Robin.

Ooh, yes, we did. There are natural hot springs on the campus of the United World College, open to the public because they are ancient sacred sites. And very, very wonderful on a chilly, rainy night. Or any other night…

17: Just saw a pronghorn antelope running along near the highway!

northeastern New Mexico, August 2008. No, we didn’t really get this close.

Home on the range indeed!

I’ve rarely, if ever, seen any wildlife in Europe larger than a marmot, though Enrico sometimes sees chamois and mountain goats way up in the Alps. I’ve seen them more often on my plate. All the animals in the Old World have been hunted so hard and so long that they’re barely clinging to existence, and certainly don’t let you get close. Except the wild boars – got plenty of those, and they are tasty. (And very dangerous, if met in the wild.)

18: finally getting a new video done. I’ve spent so much time lately talking ABOUT video that I haven’t had time to actually DO it.

@davest compressing the video of your OSDEVCON Prague talk now. Umm… can you live without previewing it?

Sometimes the computer just needs to be left alone to do its thing.

19: @davest As I recall, you did. Including some nice photos of Prague. Going up today.

combing through stats (more, again, forever…) – trying to answer the question: just how many hours of video have I done for Sun (so far)?

cafeteria has a special on San Pellegrino. Nostalgic? No. But it tastes good.

my brain hurts, trying to figure out what all I need to have a working set of 2 lavalier wireless mics

about time. A much younger drinking age (16) works pretty well in Italy

I wish more college presidents (and other people) would get behind the Amethyst Intiative. A drinking age of 21 is stupid and counter-productive. If kids learn to drink responsibly at home when young, they won’t (usually) binge drink themselves to death and/or drink and drive. And it’s simply ridiculous to allow them to sign up to go get killed in Iraq at 18, then tell them they can’t drink. I wonder how the military handles that.

okay, this 6figure stuff is beginning to look like spam…

@jeffreytaylor then don’t fight it – just go to sleep! I never sleep better than when I have eastbound jetlag. So I indulge myself.

(part of) what I do for a living

We’ve open-sourced our software, now we have to open-source the knowledge so that others can contribute to it.

oh deary me, now I have to be in San Francisco Sept 3rd. MPK gang, prepare to be descended upon (again)

“The military knows that 18-year-olds… are mature enough to fight but not ready to handle alcohol” ?!?!?

I don’t have to underline how stupid a statement this is, do I?

child abuse: taking a 5 year old to “The Dark Knight,” and laughing when she cries and says “I want to go home!”

Yes, this actually happened in Austin. The kid was terrified throughout the movie, except for a brief time when she was merely confused: “Doesn’t she love the Batman anymore, Mommy?” A handicapped child, at that; some sort of bone condition (I’m guessing) meant she walked, spraddle-legged, with a little rolling walker. Why isn’t there a required test for parenting? Far more people have been permanently damaged (or killed) by bad parenting than by bad driving.

22: hate being awake and hungry in the middle of the night

stirred up a pot of lentils/beans for tonight’s Woodstock dinner, now to try to get Ross up to decide on courses… on not much sleep

college seems a lot more complicated than I remember it being. And I didn’t even have any parental advice.

When I was in college, my parents were in Thailand and then Indonesia. Any parental help I needed would have taken a month round-trip by very slow airmail.

We had a WOSA (Woodstock Old Students Association) dinner, with guests ranging from the classes of ’42 to ’08. A good time was had by all, not least due to the warm welcome of Spankyville and Julia and Dani.

24: tired, tired, tired. Must find time to do something for myself instead of always being “on” for others.

25: Ross is signed up for her college courses, now I just have to pay the bill!

about to go check out party venues in Austin. yes, I have a hard job…

26: tuition paid. Thanks to Ross studying Hindi, far less painful than it might have been.

She’s not officially in the Hindi-Urdu Flagship program this year – turns out first-year Hindi at Woodstock was not sufficient preparation for second-year Hindi at UT. But they want to keep her, so she’s still getting the tuition waiver as long as she keeps studying Hindi (and gets an A- or better). The plan is that she’ll start the four-year program next year. Which means she can take a lighter course load and give herself time and brain space to adjust to life in yet another country – her third this year.

…when you don’t get food poisoning from it…

going to SFO to film next Weds, could be in MPK Thursday. Anyone I should meet with?

why is it that an anonymous female in the news is a “mom” before she’s a “woman”? You never see “Dad pinned in truck” or “Dad murdered”

long day btw work and coaching daughter thru first day of college. I’m *trying* to be hands-off Mom, but it ain’t working

I’m really not a helicopter parent (though parental involvement was expected and encouraged in Italian schools), but Ross seems to want me to hover. I will not stoop to giving her a wakeup call every morning.

28: making the content happen. Or at least making travel arrangements to go make it happen…

the tech world is way too small. One of the speakers at LISA I knew in my previous life at Roxio.

Yes, I will be going to the Large Installation System Administration Conference. No, I will not understand a word of it. Well, maybe one or two.

event planning has its perks: just scammed a free dinner for my daughter and a guest at a nice restaurant in Austin

She didn’t like it. Possibly part of the phenomenon that “you don’t value what you get for free,” the place had looked pretty nice to me.

scheduling shooting for several events, designing t-shirts, chking off AIs from meetings, creating a new dashboard to track it all…

Denver traffic looks like a mess, and I have to get my husband to the airport. Thank god for the toll road.

conversation with my daughter: 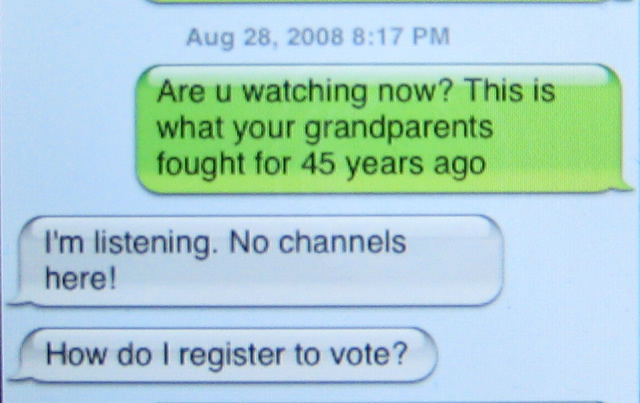 good god, a politician talking sense. Is that actually possible?

The way to reduce abortion is to reduce unwanted pregnancies. I don’t think I’ve heard a politician actually state this piece of plain common sense before (though, admittedly, I avoid listening to politicians as much as possible).

@ThinGuy yes, but that’s also true of all the rest of them, in all parties. At least he’s got mostly the right ideas.

29: twidiots: people who follow you in hopes of reaching n followers, openly state that, & provide no earthly reason why you should give a damn

just ordered a Tivo, so I can keep up with the few shows I care about during my busy fall travels

I feel overwhelmed by the constant tugs on my heartstrings and wallet by colleagues, businesses, celebrities, etc. Everyone’s got their pet cause, usually as a result of some personal or near-personal experience. In a sandwich shop, I saw a sign (complete with adorable picture “taken by her teacher who saw her just a few hours before”, asking for donations to cover funeral expenses for a little girl, niece of one of the employees, who had been killed by a car. I guess it was a way for the other employees to show sympathy to their colleague, but it seemed strange to ask customers.

You don’t see much of this in Europe (outside the many donation tins in shops in the UK), I’m not sure why.

corp travel site lists Bangalore as being in “India – Hindustan”. Who the hell designed this thing? An ancient exponent of the Raj?

30: it’s a holiday weekend, time to do the all-American thing: shopping! (for stuff I actually do need… still setting up home)

I bought a dresser from American Furniture Warehouse, the closest Colorado gets to Ikea. It was a nice change to have the piece arrive already put together, delivered to the spot in my home where I wanted it, for about $350 total.

oh, great, if I want to watch convention reruns I have to install yet more software. From Microsoft.

31: @tehduh Probably low. But the evangelical right take such interest in everyone else’s sex lives, well, hoist with their own petard…

Re. whether the speculation in the Daily Kos about Palin’s latest child was “low”.

the Republicans can’t afford to blow it with Gustav. We’re too close to an election this time.

very hungry, but I have mopped myself out of the kitchen and have to wait for the floor to dry

…my Tweets are more often about mundane things like mopping than about politics. This is true of most Twitters I follow, for that matter.