^ above: Occasione means “For sale, great deal!” (And no wonder…) 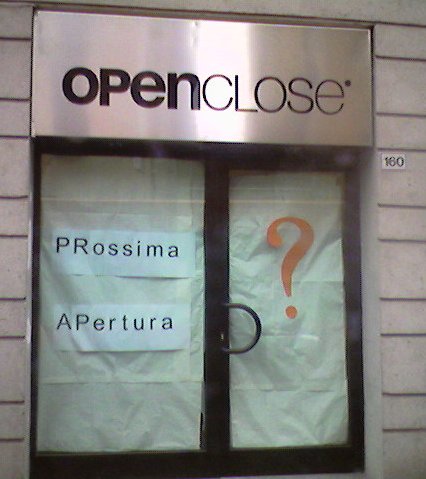 ^ English education in Italy clearly never includes proper use of the apostrophe (a common mistake among native speakers as well, I know!). I simply cannot think of a correct English usage that would be spelled Pant’s. Except in India where the name Pant (pronounced Punt) is fairly common, so you could be referring to something belonging to Mr. or Ms. Pant.

^ We were walking past a church where a funeral was being held, the hearse parked outside waiting to go to the cemetery, when this official car from the City of Lecco pulled up. The office of servizi demografici (population services) keeps track of the local population. Had they come to make sure the person was actually dead?

You could say Sono golosa/o di... or Sono ghiotto/a di to say that you love a particulare kind of food, e.g. cioccolato. 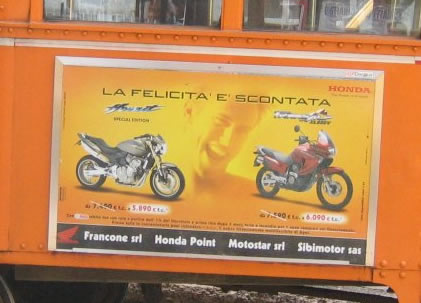 These were part of a series of punny posters advertising flooring materials.

Ne combiniamo di tutti i colori literally means “We put [things] together in all colors,” and can be roughly translated as “We get up to all sorts of mischief.”

In this case, of course, the pun is on the combination of (racial) colors in the picture, and that they seem to be getting up to some sort of hanky-panky (Italy doesn’t know about cheerleaders.)

Supportiamo tutto – “We support/put up with/bear anything”, referring to load weights. I can’t help thinking that in the US they would have to show much fatter people to make their point…