Diwali is the Festival of Lights, so the market in Alwar was full of light-making apparatus: candles (above), 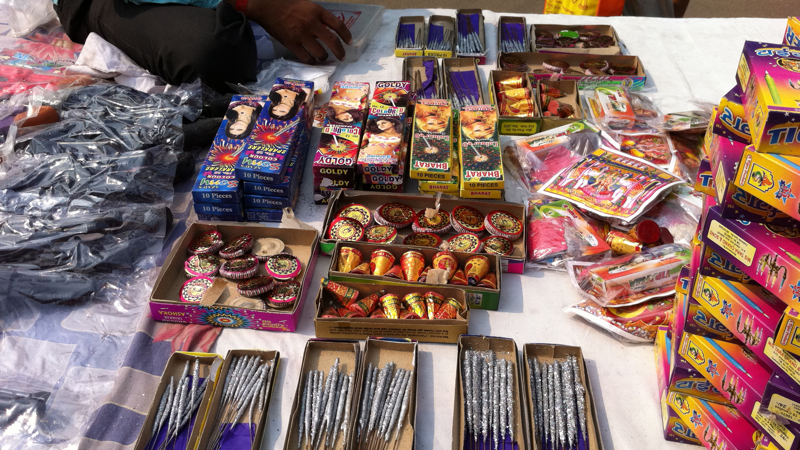 fireworks and diyas (above): add a wick of twisted cotton and some oil to make a very ancient kind of lamp, shown in action below:

(Yes, I was startled by the firecracker going off.)

^ The hill fort was lighted with both diyas and electric bulbs, more on the side which could be seen from village below…

…which was in turn lit up. I could see people moving about with lighted diyas on a tray, placing them atop their walls and roofs. There was a cacophony of music and fireworks, and in the distance we could see much bigger fireworks from Alwar and elsewhere.

Earlier in the evening we had wandered into a room signed as the “TV lounge,” which we hadn’t bothered with because we had no interest in TV. We were surprised to find that it was the former royal hall of this mini fort-palace:

I didn’t know what the white cushions on the floor were for. Later on, all became clear: the room was set up for a puja, with a small altar on the table containing a poster of Saraswati, Ganesh, and Lakshmi, and offerings of sweets and a coconut. A Brahmin priest was brought from somewhere, and all the guests of the hotel were invited to participate, sitting on the cushions along with the staff. The participating guests were an older Sikh couple, a young Indian couple whose religious affiliation I could not determine, and ourselves. We all took turns to wave a tray of offerings with a smoking lump of camphor in front of the altar, while the priest led us in Hindu hymns (from a book, which I thought was cheating – Brahmins are supposed to know everything from memory). One of the hymns was about loving all your fellow men, which the priest gestured should include all of us.

We were each given a sweet and a choice of “dried fruits” (including nuts) from a fancy package, and a multiple thread dyed red and yellow was looped several times and tied around each of our right wrists. (I’d seen balls of this thread for sale in the market earlier and wondered what it was for.) The priest marked each of our foreheads with a thick red paste and stuck a few grains of rice into it; when I washed the paste off later, it smelled like the powdered poster paints we used to use in school.

We should perhaps have tipped the priest, but we’d been summoned to the puja from drinks on the terrace, and didn’t have any money on us. No one seemed to mind.

A(nother) sumptuous dinner followed, and the fireworks went on into the night.