Bryan, Brendan and I recently traveled to Porto Alegre, Brazil, to speak at FISL, one of the world’s largest open source software conferences. Porto Alegre, at least in winter, is not much of a tourist destination, and we had several extra days – far more than needed – to see all that there was to see. One attraction listed in the guides is the Mercado Publico: the century-old public market, a large building filled with stalls selling produce and household goods – not tourist stuff.

Two of the stores sell religious paraphernalia, not just the typical Catholic saints etc. you might expect, but items related to Candomblé, a syncretic religion developed in Brazil from the beliefs of various African tribes who were taken there as slaves. I knew a bit about it from the film (which made its way to the US while I was in college) and book Dona Flor and Her Two Husbands

, by Jorge Amado, one of Brazil’s most famous and beloved writers.

^ Statuettes of Candomblé priestesses in trance; each is possessed a different Orixa (god), symbolized by her costume.

I bought a couple of stickers without knowing what they represented, just because I liked their looks: 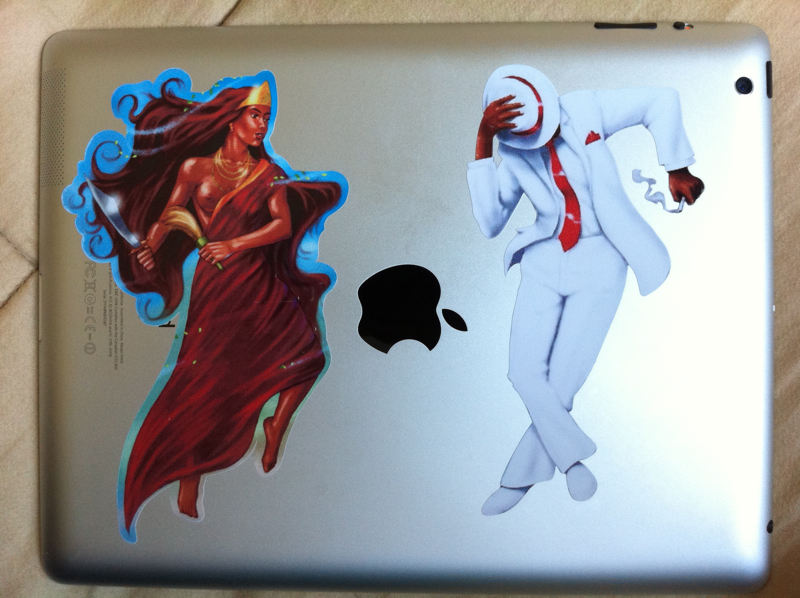 Research on Wikipedia and Google told me that these are Iansa’ and Zé Pilintra:

The figure of Iansa’ always keeps a good distance from the central female characters of the mythological pantheon of Africa; she is closer to the territory traditionally devoted to men, being present on the battlefield, where she joins in the big fights, and preferring paths full of risk and adventure. Finally, she is always away from home; Iansa’ does not like housework!

She is extremely sensual, passionate, and has had multiple partners – but rarely at the same time, because Iansa’ is usually full in her passions. She is never mediocre, regular, or discreet, her quarrels are terrible, her regrets dramatic, her triumphs crucial in any subject… She is not given to pettiness or small betrayals. She is the Orixa of rapture, of passion.

She was the wife of Ogun and, afterwards, the most important wife of Shango. She is restless, authoritarian, but sensual, strong-tempered, domineering and brash.

from vilamulher.terra.com.br, by way of Google translate

Zé Pilintra, on the right, is “the patron spirit of the barrooms, gambling dens and gutters (while not aligned with “evil” entities, however)”. For my Italian speaking friends, his name would translate as Zio Malandrino – which I cannot translate into English.

In other words: my kinda deities.

One thought on “Protective Spirits”