On June 16, I became an employee of Ericsson, the Swedish telecom multinational, following Jason Hoffman (above), the founder who had originally hired me into Joyent in late 2010, and was until last September the CTO and my direct boss there.

My last few months at Joyent were, frankly, hell. Jason left, Isaac left, then Brendan left, and others – some of my favorite colleagues and most fruitful collaborators. I simply couldn’t do many of the things I had done for Joyent before.

I have plenty of experience and skills, but the story of my working life is that I don’t fit easily into standard job descriptions. I have usually been ahead of the curve, inventing new job categories (online marketing, community management, social media, videoblogging, developer marketing) before many others were doing them or knew what to call them. I didn’t expect this job search to be easy. It wasn’t.

A few years ago, after the Oracle acquisition, I had written down some Reflections on My Career Strengths. Now I had to think further.

I started by talking to some well-placed and experienced industry friends, to whom I am deeply grateful for their encouragement and advice. They asked: What do you want to be doing in your career? What kind of situation do you want to be working in? Living in Italy, as I had for much of my career to date, I never had the luxury of choice, so I had rarely asked myself, let alone answered, such questions.

It took time and more conversations to start finding my answers. Talking with others, for me, is thinking out loud. It’s like sonar: I see the shape of my own ideas better when I bounce them off others. (Which is also why I blog.) So I talked to many people. I was amused at how differently each of them saw me, depending on which facet of my skills they’d been exposed to. But that made it difficult to figure out what job categories I should be searching in, and also showed that it can be a career handicap to be good at too many different things (a topic for a future article, perhaps).

Some of those conversations took place during actual job interviews. I probably broke every rule in the “how to interview” book by being (mostly) bluntly honest. But… would I have wanted to work for a company that did not know and might not want the real me? For better and for worse, most of us spend most of our waking time and attention on our jobs. To constantly pretend to be someone I’m not at work would be… well, impossible.

Through all this, I did figure out a few more things about what I want in my career:

As I learned more, I tweaked my LinkedIn profile constantly to try to attract the kinds of jobs I wanted, and was able to sniff out some available jobs that seemed suited to me. I didn’t expect to get interviews by simply submitting my resumé, but I did in fact get a few that way. Others came about because friends recommended me to other friends.

Most of the jobs I interviewed for, across a wide range of companies, had “developer marketing”  in their titles. This is a new and in-demand skillset and field; not many people can claim to have experience in it. All of those jobs were potentially interesting; I liked the people I talked to, as well as most of what I observed or knew about the companies. I probably could have made a happy niche for myself in some of them.

But… such a job would mean the mere application of skills that I already have. I’ve been doing developer marketing for some time, and, while it’s a new concept to many, the tasks involved seem obvious to me. The challenge in any of those jobs would have been in applying my expertise and experience to new products and platforms, while learning how to get things done in a new environment. But the work itself would be comfortable, more or less routine – no new skills needed, just refinements of my existing skills. The thrill of the new in these cases would have lasted… maybe six months.

I don’t like to repeat myself. I don’t like knowing exactly what each day, week, month, quarter, and year will look like. I don’t like my job to be too easy. I like being a little scared, a bit intimidated, wondering more or less constantly: “Am I really able to do this?” I like having to make it up as I go along, because no one else has done anything quite like it before.

Because, when I do pull it off, it’s the best feeling in the world: “I did this, and it’s never been done before, and it’s good.” There is no boss better for me than one who sets me up for real challenges, and assumes that I can meet them (while providing needed air cover and support).

And that, thanks to Jason, is the situation I’m going into – at a job I didn’t even quite interview for. I can’t tell you exactly what I’ll be doing, in part because I have joined Ericsson’s Business Unit Cloud & IP – which is only three days old (yes, I was hired into it before it existed). Many things are still being defined, but… it looks like I’m in for a hell of a ride. Wheeeeeeee! 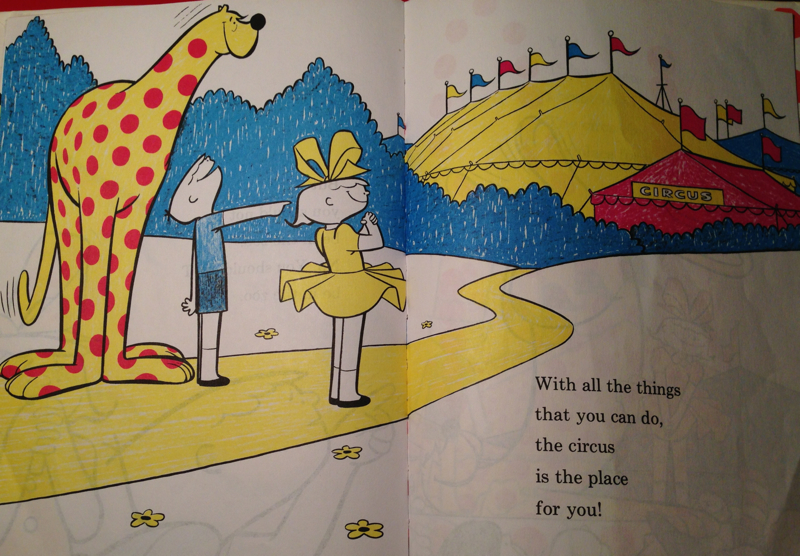 ^ image used with apologies to Robert Lopshire, from Put Me in the Zoo

My Career Evolution from Tech Writer to… Many Things

Work in Progress: This Site Has Moved

One thought on “The Place for Me”