Turned out that the anticipation of losing it was much worse than actually losing it.

Before even starting chemo, I went to a shop selling wigs, hats, and prostheses for cancer patients. They advised me to try on wigs then, because, even before hair loss begins, your scalp gets so sensitive that you don’t want anything touching it. (This turned out to be true.)

So I tried on some wigs, and bought one that could pass for a hair cut and color I might actually have had sometime. I have not worn it yet, except briefly to play around and to show people. Before seriously wearing it, I would have to get it professionally adjusted (I have a fairly small head) and trimmed so that the bangs aren’t constantly in my eyes.

But at this point I’ve concluded that I may never wear a wig in public, for several reasons:

I can imagine wanting to wear a wig, for the reason Jenny Allen mentions in this monologue: even though it’s obvious to most people that you’re wearing a wig, and they may guess that it’s to do with cancer, wearing the wig is a signal that you are trying to pass for and want to be treated as a “normal” person at this moment, and probably don’t want to talk about cancer. Whereas wearing a hat or going bare is something of a statement. And then you might have to be a cancer evangelist at a moment when you don’t have the energy or resilience to talk about it.

So far, the times I’ve been out in public, I’ve been wearing a cancer hat, and almost no one has said anything about it. I seem to get unusually attentive service in grocery stores (which is nice – the people at Trader Joe’s recognize me and say they’re glad to see me again). Another shopper at TJ’s said to me: “I went through that a few years ago.” “I’m glad to see you’re still around,” I replied. (She had great, thick hair again, too.) Beyond that, I’ve had a few pitying or worried looks. Common as it is, cancer still scares people.

But, before I got so philosophical about it, I had to face the anticipation of losing my hair, and that was very upsetting. I had been warned by the literature and the medical people that It would start to go around Day 14 of the adriamycin. Already on Day 5 (Feb 2nd) my scalp became sensitive to a hot shower.

By February 14th, I was brushing out large amounts of hair: 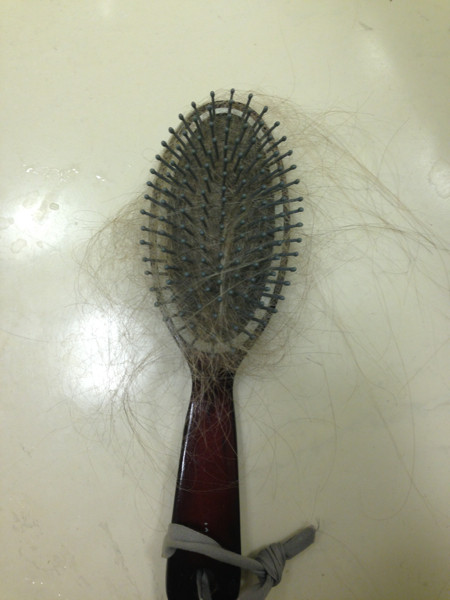 The photo at top, of my pillow, was taken the next day. It was both depressing and annoying to be shedding like a Labrador, and having to clean up after myself with a lint roller and vacuum cleaner. That was the day I had Brendan buzz off my hair (not too short) with clippers: 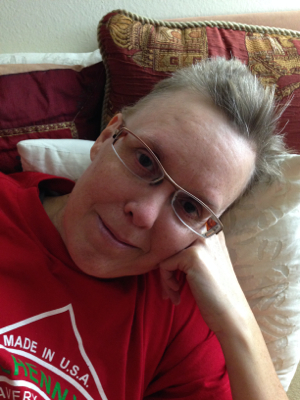 But it soon began to look ragged, and, as I learned, a newly-balding head is not a smooth, shiny dome: 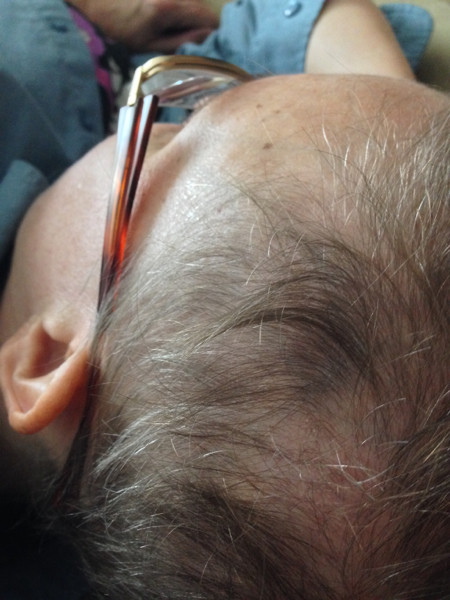 I don’t know whether the irritation was from chemo or dandruff, but… eww. (It cleared up quickly, since then I’ve had plain scalp shining through).

Not long after, we buzzed it off even shorter: 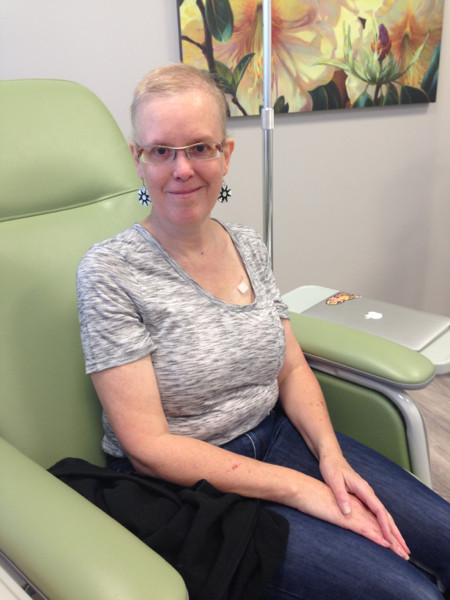 My hair continued to fall out. I ended up with some shiny bald patches, but so far I haven’t gone totally bald. Which was actually something of a disappointment: I wanted to do a henna crown. My second chemo regime is taxol, which reportedly can also make you lose hair, but the chemo nurses told me my hair might start to regrow during this treatment. As far as I can tell, it is no longer falling out and is growing back, but very slowly. At this rate, it will be many months before I can pass for simply having a very butch haircut (which wouldn’t be a first for me).

Various tweets about hair covered in my Chemo Roundup: February.

As for the hair elsewhere on my body… my pubic and armpit hair started coming out about the same time my head hair did. Like my head, those areas never became entirely bald, but the hair is still very sparse. I used to shave my lower legs daily. Since chemo began, I’ve shaved a few times, but my leg hair also grows back very, very slowly, and very thin. So, altogether, I’m saving a lot on depilation this year!

I still had eyebrows in late March, but they were mostly gone by late April. Now I seem to have a few thick hairs growing back, also slowly. Some people, in the aftermath of chemo, grow Groucho Marx eyebrows. That would be fine – I could always have them thinned and shaped. But I’m not coordinated enough to draw on non-existent brows with an eyebrow pencil!

One of the side effects of chemo is preternaturally smooth skin. So I have big eyes, a big dome of a head, no lines in my face, no eyebrows, and no hair. Yes, I look like an alien, or a baby. Or, as my daughter said, like Dr. Evil: 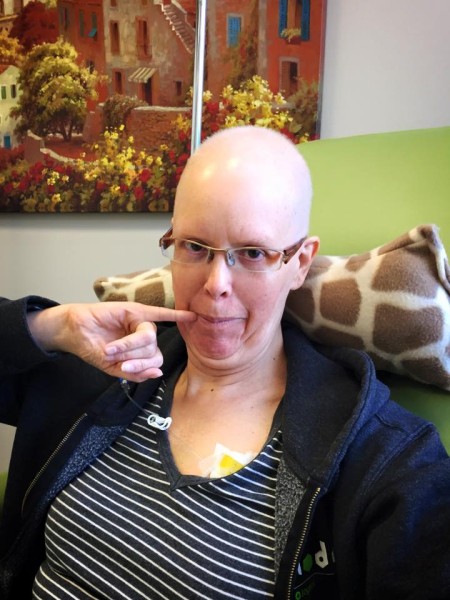 I don’t look at myself in the mirror much nowadays, but… I never did before, either!

My head, pubic, and axillary hair all seem to be growing back, slowly. Hard to tell what color my head hair will be; so far most of it seems to be as fine as it ever was, overall pale but not silver, though there are some silver hairs and some darker patches. My pubic hair is coming in whiter, but the early growth is not firmly rooted. Axillary hair is sparse and dark (as before).

I am unhappy to note that my eyebrows are getting even more sparse, and now my eyelashes are starting to go.