Last Christmas (2016) we did not spend in Australia, partly because we had just had a vacation in India in October/November, but also because we were going to Hobart, Tasmania, in January for linux.conf.au – Brendan was speaking, I attended the Community Day, which was a great opportunity to learn from old friends and new.

We caught up with the Women’s March in Melbourne:

And looked at some of Sydney’s 94 public beaches:

We also saw a match at the Sydney Cricket Ground, Pakistan vs Australia.

February, back in California, we finally got rain, after years of drought.

This is a lot of water for this creek pic.twitter.com/ifgLsEYjPA

I attended conferences: some for (or thanks to) Ericsson, some with Brendan.

At Ericsson, I was doing content and social media tasks that I’d been managing interns and contractors to do the previous year. The company was (still is) in crisis, it was time for a job change, and I was out looking – always a stressful process in itself. 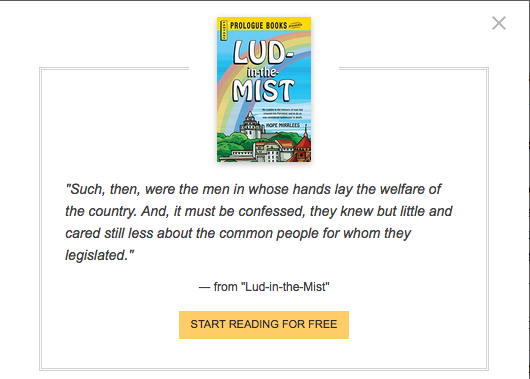 In April, I reflected on Living with Terrorism – which is nothing new in my life.

In May, I resigned from Ericsson and had a few weeks off between jobs (I gave a hint what my next gig would be – did you spot it?). I spent the time off visiting a dear friend in Kansas, and my daughter in New York.

A few days’ getaway with B before my life gets busy again… bliss! pic.twitter.com/Xsw7TclTjN

We attended the Netflix 100 Million party, where the photo booths were both high-tech and Netflix-themed. The party was to celebrate Netflix’s global reach; we dressed accordingly.

I always wanted to be in a rom-com – or at least have the special effects. pic.twitter.com/GyHJrgICYz

Just landed SEA, and it’s only Day 1! Happy and excited to be on @zahedab ‘s team at @awscloud ! pic.twitter.com/20Ux29goFL

(That’s Nithya Ruff on the left.)

Had a very busy first week: new hire orientation, which I left early to fly to Seattle, a TODO Group meeting, AWS Community Day in SF, and all the usual new hire stuff like getting my new laptop set up. There was a lot of training to be got through.

While listening to hours and hours of training, I’ve been doodling (keeping my hands busy focuses my attention). pic.twitter.com/3lgm2gsIS9

July 4th we went to Berkeley to visit Celeste and Ilona. We did not know that would be the last time we would see Celeste. 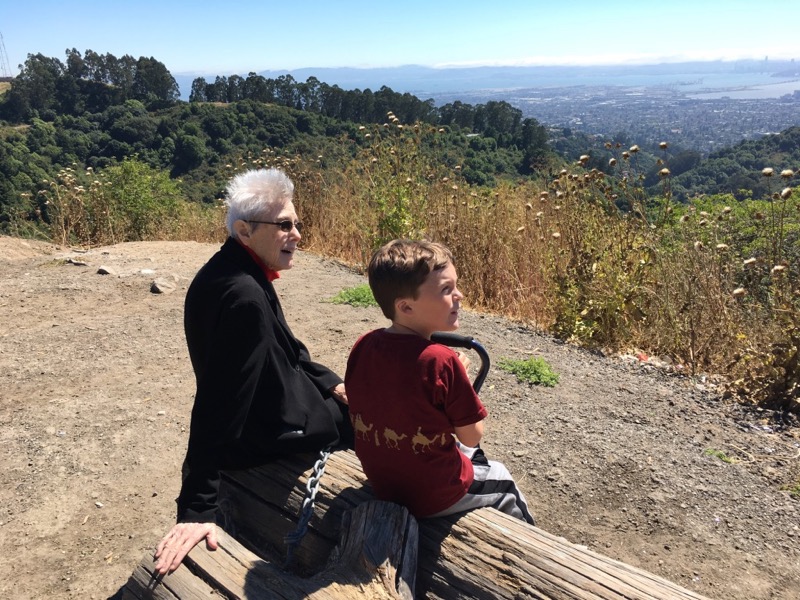 We had the usual Bay Area summer weather.

Anticipating a lot more commuting, I bought a new car: 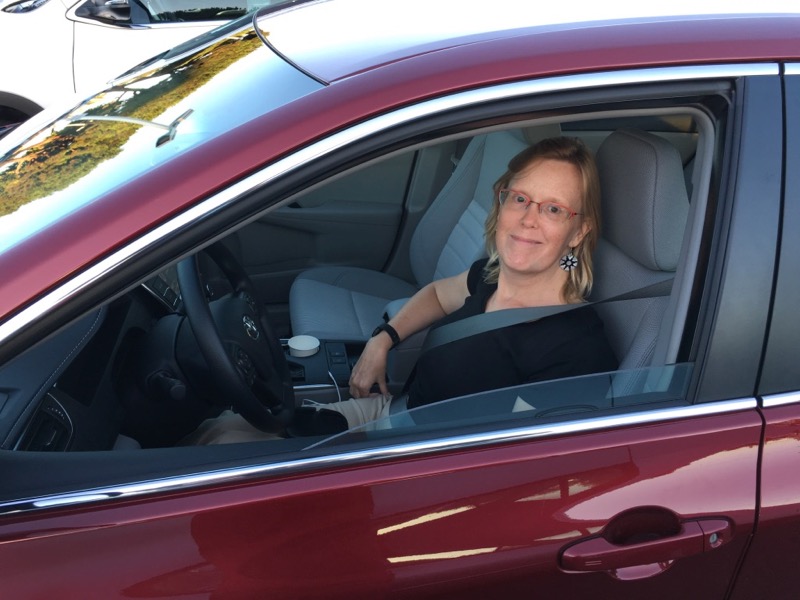 (It’s a hybrid Camry. When the worst thing that Consumer Reports can find to say is: “Everyone has one,” that’s the car for me. Every other part of my life is so unpredictable, I want transportation that I don’t have to think about.)

The last week in July, I was in Seattle for an internal event with AWS developer evangelists – had fun getting to know some of them. 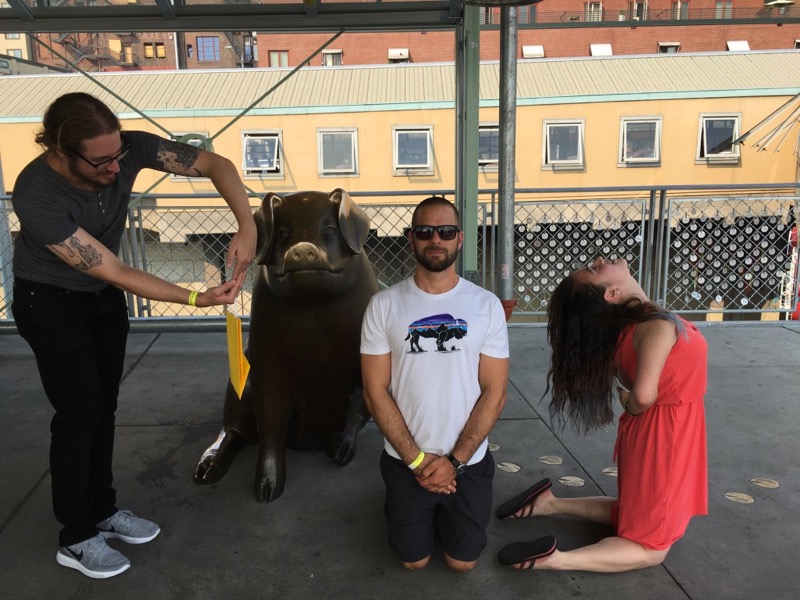 Unfortunately, that was the week that Seattle was blanketed in smoke from forest fires in British Columbia – the air quality was as bad as Delhi’s. For me, this triggered a sinus infection which was to prove hard to shake (yes, climate change is hazardous to health).

I was walking out of San Jose airport to catch a car back home when I got a call from Ilona: Celeste had died. I’m still not used to the idea that this force of nature is no longer in my world.

In August I completed my annual round of post-cancer tests and checkups: all is well on that (my) front.

“I love you” is a wonderful phrase. But there’s a lot to be said for: “You are cancer-free.” (Two years post-treatment, and all is well.)

Brendan drove north to see the eclipse. I wasn’t able to accompany him, but I reminisced about an eclipse experience of many years ago.

In September I had occasion to go to Maui for a few days (work, not play, but still enjoyable).

Then Brendan and I went to LA for the Linux Foundation conferences, at which we both spoke – I think that was a first. My talk on “Marketing Your Open Source Project” was not recorded, but they did a nice post about it later.

After that, we went to Paris, where Brendan was speaking at two conferences back to back. We stayed at the stunningly fabulous home of a Woodstock classmate of mine. 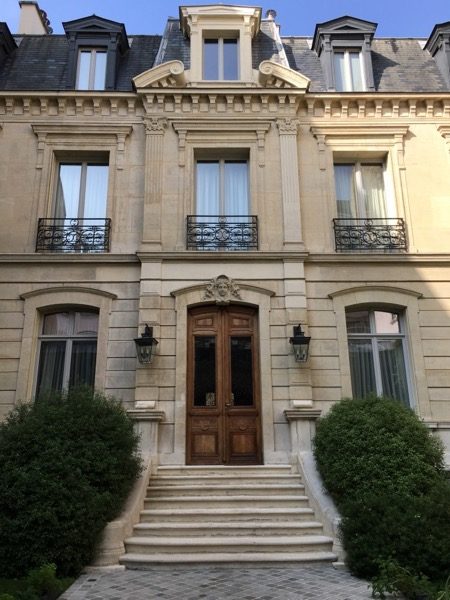 Brendan decided that his favorite thing in all of Europe was the private pool in the basement.

On a boat full of BSD folks. In Paris. Because that’s my life. (And it’s a good life.) pic.twitter.com/2wCbsMU8lk

We did as many of the usual tourist things as we could manage, in the time left over from conferences and (for me) work.

Then we took a week of real vacation in Italy (my first visit in six years), seeing sights and catching up with a few old friends in Rome and Milan.

The day after we got home, it was the Bay Area’s turn to be covered in smoke from wildfires – again, not good for my respiratory system. The sinus infection came roaring back.

Brendan had a significant birthday. With important help from his colleague Guy (shown at left), I pulled off a surprise birthday party which actually was a surprise: 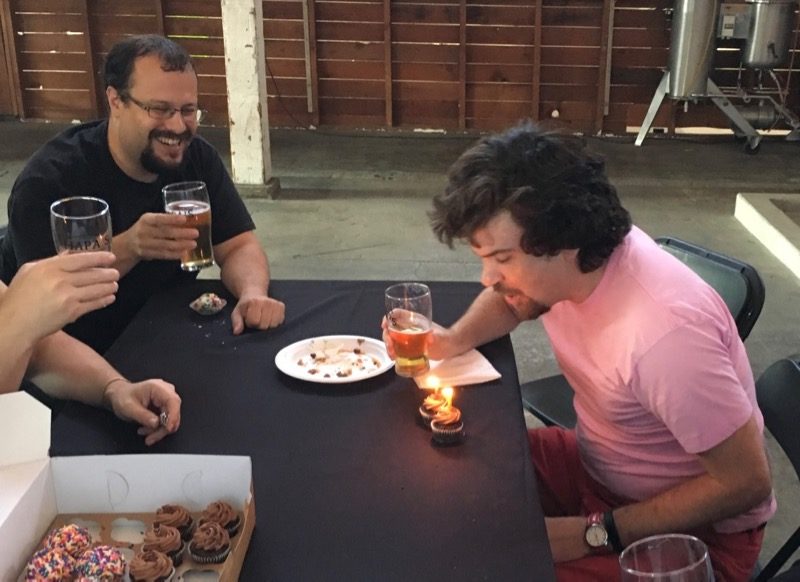 I hung out at USENIX LISA (which Brendan will be co-chairing next year, along with Rikki Endsley) in San Francisco, and also had a procedure – basically, a power rinse – on my sinuses to try to clear the infection, which had not responded to five or six rounds of antibiotics (it’s likely that the critters in my sinuses had formed biofilms, making them hard to attack with medication).

October was also the month that #metoo started. I had already shared many stories about lifelong experiences of sexual harassment, which for me (fortunately) have mostly not occurred in the workplace.

But I and many others have experienced other forms of workplace harassment. In November, Brendan published a post on Brilliant Jerks in Engineering, and I did a companion piece On Bullying.

Late in November, I launched the AWS Open Source blog. This is and will be the main thing keeping me busy at work, and it’s a fun, challenging job – like being a journalist, where my beat is almost anything to do with open source at or on AWS (or any other part of Amazon). That means a potentially huge variety of projects, most of them deeply technical, being created by brilliant people to solve interesting problems. If you know me or my work, you’ll know that helping people communicate about complex technologies is my career sweet spot. Now I just have to do more of it, and faster, to keep up with a regular blogging schedule.

The blog started the week before re:Invent, AWS’ biggest event of the year, at which Brendan spoke. Ironically, I did not attend: employees go only if they have specific jobs to do at the conference (I probably will have, next year). I didn’t want to spend my birthday week alone at home, so I went to New York to see Ross and Dan. I did work that week (had plenty to do for re:Invent even without being there, and a new blog to keep running), but I also played: we saw Hamilton (my second time, Ross and Dan’s first), had a birthday dinner with a few friends, and other time for company and conversation.

Sarah got me this wonderfully apropos present: 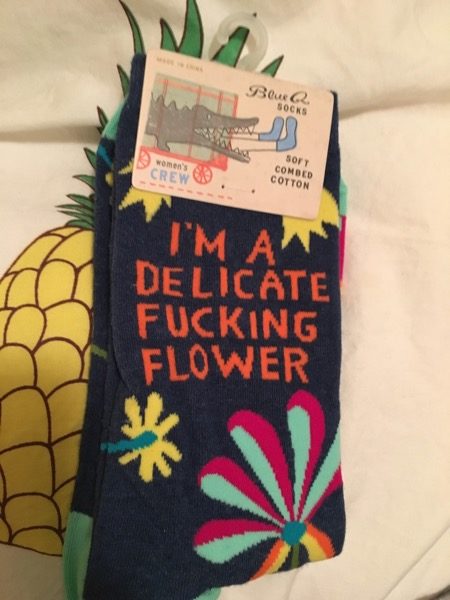 I returned to the Bay Area that Friday night. On the Sunday, Brendan, Mitchell, and I attended Celeste’s memorial service (which had been postponed from October due to wildfire smoke).

Monday morning, Rossella called me: her father Enrico had had a stroke. She flew to Italy that night. He’s now in a clinic in Milan, undergoing intensive physical therapy. Enrico and I are far from close these days – we haven’t even spoken in years – but of course this makes me sad for him, and for Ross.

My Woodstock family continue to be an active part of my life – we had visits this year from Sara, Denise, and Neerja, Sarah was at my birthday dinner in New York, and I regularly see Jonake, who also lives here in the Bay Area.

Sadly, we lost a much-loved member of the Woodstock family this year:

#Amul Topical: Tribute to a fine actor and gentleman. pic.twitter.com/9pSHV8oEUE

As for politics – because, yes, politics is an important factor in everyday life – I do what I can. I donate. I call. I write. I listen and discuss on Twitter and Facebook. I try to warn Facebook friends about untrustworthy “news” sources. (I’d been doing that for years already.)

I give monthly to Planned Parenthood, primarily because birth control is a critical matter of women’s health, secondarily so that others have a chance to catch cancer early, as I did. I also give monthly to the ACLU and the SPLC. I pay for good journalism (far more than I have time to read): the Washington Post, the NYT (yes, with reservations), Mother Jones, the Atlantic, the Economist, Pando, and perhaps others that I don’t remember right now.

In all these ways, I pay attention.

It is in fact possible to love your country & also be angry at its injustices. If you’re not angry, then you’re not paying attention. https://t.co/scOQfvjbPO

Although many things are going well for me personally right now, I am grieving, raging, and despairing at the state of my country. No matter how well I am doing myself, I cannot really enjoy it when I know that so much is so wrong for so many. And has been for so long – as I have been aware for years.

I’m also aware that there are direct, if not immediate, threats to my own well-being and my very life. I’m a cancer survivor. Without the Obamacare guarantee of coverage for people with pre-existing conditions (at affordable prices), I live in terror of not having a job with health insurance. And it now looks likely that Medicare will be cut significantly just about the time I’d become eligible for it, if not sooner. Unless we manage to forestall the wrecking of the US economy and social support system long enough for a government of integrity and humanity to be elected. Even then, it will take time to undo the damage now being done.

On top of these social and economic disasters, we have the renewed possibility of nuclear war (oh, well, it was nice to have a few decades’ respite from that particular worry). And the onrushing environmental disaster being wreaked upon our planet. In the scale of things, the wellbeing of myself, my family, and even my country seem relatively unimportant.

I’m not sure what is the rational response to a world gone mad. The best advice I can think of is: take care of those you call your own (and as many others as you can manage) and keep good company.

The Place for Me