Some evenings, stepping off the train as it arrives in Lecco, there’s a slightly toasted, coffeeish scent of rich, dark chocolate in the air. It’s not a hallucination: Lecco is the home of Icam, one of the world’s largest manufacturers of organic chocolate. They process 6000 tons of raw cocoa beans per year, and when Read More…

Some evenings, stepping off the train as it arrives in Lecco, there’s a slightly toasted, coffeeish scent of rich, dark chocolate in the air. It’s not a hallucination: Lecco is the home of Icam, one of the world’s largest manufacturers of organic chocolate. They process 6000 tons of raw cocoa beans per year, and when those beans get to cookin’, the whole town is wrapped in a sensuous fog of aroma.

I had long been aware of Icam as a purely local phenomenon – Icam-branded chocolate doesn’t even show up much in Italian stores, though some friends had proved to us that Icam’s chocolate-hazelnut spread was far superior to Nutella. I knew that Icam had a spaccio (outlet store) at the factory down in Pescarenico, but I never managed to get there until we’d been in Lecco for a while, and then only because they ran extended hours during the Christmas season.

I discovered one Christmas that they make very good “cru” (single-origin) tasting squares of “Extremo” 75% dark chocolate – I bought some for family Christmas presents. 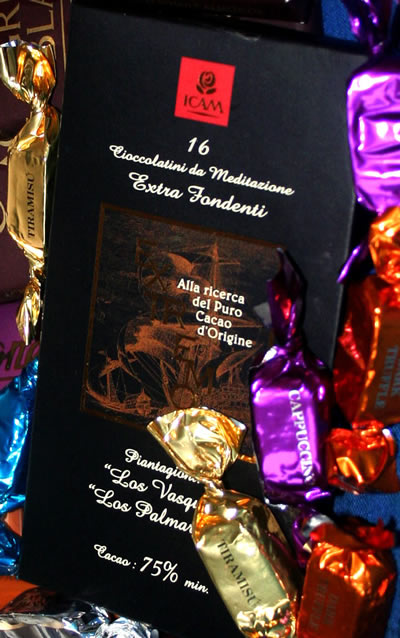 More recently, I was surprised to notice that our friend Michele was selling Green & Black’s, the famed UK brand of organic chocolate, at his bakery in Lecco.

“Where did you get that?” I asked.

“They make it right here in Lecco!”

He told me that a British couple had stopped for a chat at his shop. Turns out the man was a financial officer with Green & Black’s, in town to visit their production partner. He told Michele that some (surprisingly large) percentage of Europe’s chocolate, including much of Green & Black’s, is made by Icam – exactly how much I have not been able to confirm. He may have been referring specifically to the organic chocolate market – I have not so far located any definitive figures on European chocolate production, though I did find a list placing Icam as number 89 among the Top 100 Global Confectionery Companies. They evidently manufacture for others who sell organic chocolate, such as Seeds of Change.

So Icam was on my Christmas shopping list again last December. I came away with:

Yes, it was a lot to carry! But I couldn’t resist – the bill for all this was only about 50 euros. Both at home and at the office, we had a very sweet Christmas.

Icam is doing so well that it needs to expand, but apparently is not finding encouragement to do so in Lecco. However, last I heard, their efforts to build a new factory in a nearby town were also frustrated by some strange local resistance.

<sigh> It can be inexplicably difficult to do business in Italy. Icam would probably have fewer hassles and lower costs if they moved their operation to some other part of Europe. But Icam is a family-owned business, and we can all be thankful that Italian families and businesses are stubborn about sticking to their roots!