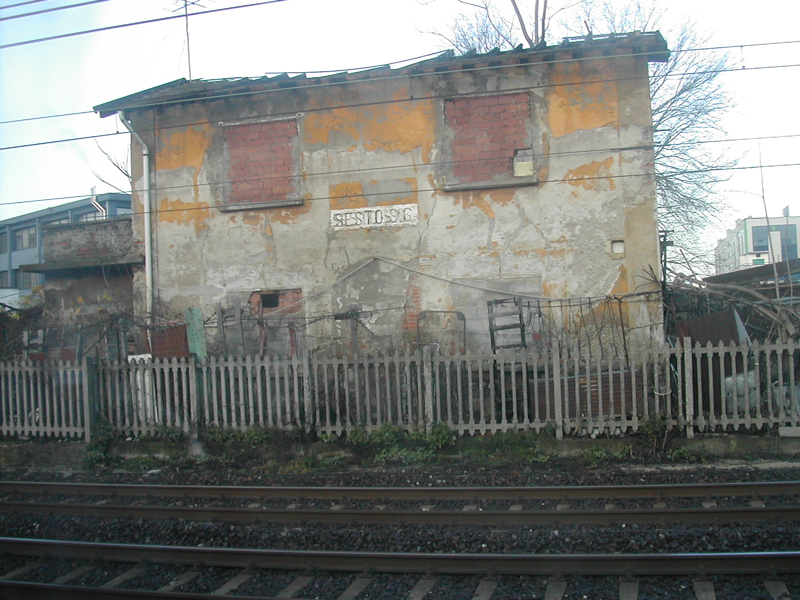 A few days ago I posted a message on the [now defunct] Expats in Italy forum about the fact that I am (partially) leaving Italy to take a job in the US. This has engendered much discussion, and has raised some points that I want to expand on.

Simo, an Italian now resident in the US, wrote:

“Life in the U.S., with the exception of few cities like New York, is about getting into a car and driving, not exiting a portone and finding people walking to places. After riding on the free/expressway, one heads to work, where another “island” awaits you. The mall is next for any shopping. This is what I mean by seclusion: no macellaio, no edicola, no bar. Irrespective of how many friends one has, I find this type of life much less communal and more isolated than any life I have had in Europe, in particular Italy, Germany, France, and Switzerland.”

My response to him quickly grew too large for a forum post, so here it is:

Good point, Simo, but, sadly, going out of date in many parts of Italy. We lived in the same apartment for 13 years in Milan, our corner barista, maccellaio, fruttivendolo, etc. saw our daughter grow up, and that was a nice feeling. I shopped at the stores near home even though I knew they were more expensive than the supermarket, in part because the small shops gave me better service – they knew who I was and what I liked.

We lived in a neighborhood which had been built in the 50’s, then on the outskirts of town. When we first arrived in 1991, many of the residents were still the first purchasers of their homes, by then retired. While we lived there, they mostly died off, and their apartments were sold or rented to immigrants. The man downstairs who grew deaf and played his TV too loud died and was replaced by a bunch of Singhalese who were very quiet, except when they got together to sing on Sundays (worship? I was never sure), and whose cooking smelled delicious – except on the days they cooked fish.

Chinese grocery stores appeared (I could finally buy all the spices I needed for Indian cooking!), and each bar in a six-block radius developed its own regional clientele: one for the South Americans, one for the North Africans, etc. The Italians felt under seige. The same week that we moved to Lecco, I learned that our corner barista had sold his bar – to a Chinese family. I haven’t had the courage to go back and find out whether their gelato is as good as his was.

In the 17 years I’ve been in Italy, the small, family-run businesses that gave Italian life so much of its flavor (literally as well as metaphorically) have been under increasing pressure from American-style big box stores. The big French chain Auchan has arrived, Ikea has added locations, and there are new, large specialists such as Mediaworld (my personal favorite: appliances, electronics, and movies). Not to mention international clothing chains, both Italian and foreign. All we’re missing is a Staples or OfficeMax.

Italy’s traditional town centers don’t have room for enormous establishments like these, so they are to be found in large shopping centers or strip malls out of town – forcing their customers to drive. Judging by the state of their parking lots, plenty of people are happy to go the extra 20 kilometers to enjoy the cost savings and, probably, the “experience.” Hard as it may be for Americans to believe, when you’ve been looking at the same quaint medieval streets all your life, a new shopping mall can be exciting.

Economic changes in Italy both lead and follow the trend towards bigger, cheaper shopping. In the past few years, especially since the advent of the euro, consumer prices have risen faster than salaries. Most urban Italian couples find that both members must work to make ends meet. There’s no longer a mamma at home to do leisurely, daily shopping: Italian families now pile up their carts weekly at a big supermarket. When they get everything home, they have larger refrigerators to keep it in. And the Italian food industry is exploring ways of making foods, such as milk, last longer. Sound familiar?

The famous Italian leisure lifestyle is also changing. When we first moved to Italy, it was unthinkable for anything to be open on Sundays except restaurants, bars, newsstands, and a handful of pharmacies on scheduled emergency-service rotation. Shops were only open on Sundays during the run-up to Christmas, which was far shorter than the American “holiday season.”

Now you’ll find many big, out-of-town stores open on Sundays, and ongoing political battles between in-town chain stores who would like to do the same, and the small, family-run shops who need a day of leisure but would lose a lot of business if the bigger shops were open on Sundays. Many Italians who don’t own shops are impatient with this: they no longer want to sacrifice convenience for tradition – and many really can’t afford to.

Italy will never be suburban in the way the US is – the geography and history simply don’t lend themselves to that style of development. But, like the rest of the world, Italy is rapidly globalizing. I believe this is a good thing for the world and, ultimately, for Italy. But it does mean change, and change is rarely easy, even when it’s for the best. And change means that both Italians and foreigners must adjust their cherished notions of what life in Italy is really like.

We all have romantic ideas of Europeans spending endless hours chatting over coffee and cigarettes at their local café, taking a Sunday afternoon passeggiata (stroll) in their stylish clothing, stopping to chat with family, friends, and neighbors they’ve known for decades. For some, all that is still true.

On the other hand, my recent experience of living in Lecco and working in Milan presented quite a different reality: I left the house at 7:30 am and got home at 7:30 pm (by which time all the shops were closed). If it weren’t for my husband’s more flexible schedule, we would have been eating take-out pizza every night. I was far more likely to spend Sunday afternoon grubbing in the garden (my only opportunity for exercise and relaxation) than dressing up (can’t afford designer clothes anyway) and strolling around.

From my many hours on Italian commuter trains, I know I wasn’t the only one living this way – I was even one of the better-off, because my journey ended in Lecco. Many commute from much further, every day, because the job market is lousy in their quaint little hometowns, but, even if they wanted to move, they can’t afford to rent or buy a home in the big cities.

Four to six hours a day commuting, then you spend Saturday doing the basic shopping you can’t do any other time – by Sunday you’re probably in a state of collapse.

18 Replies to “Italy Changing: La Dolce Vita Ain’t What It Used to Be”