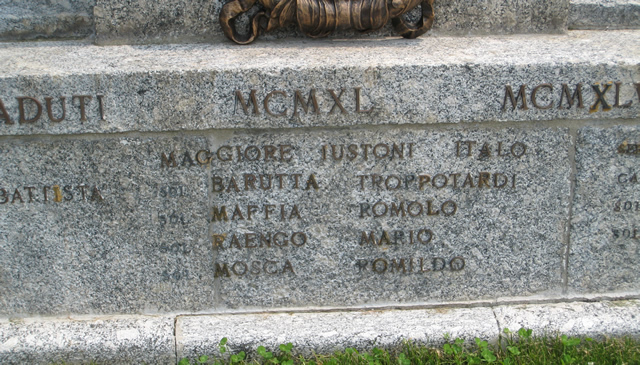 above: “What were they thinking?” department: This monument to those fallen in WWI in the Lake Como town of Gravedona shows someone whose parents named him “Troppotardi” – “too late”.

An article in Il Corriere della Sera points out that Italian law aims to prevent children being given “ridiculous, shameful, or embarrassing” names by their parents.

The official whose job it is to decide these things (the Public Prosecutor of the Commune where the birth is registered) sometimes has to sort out perplexing problems, such as whether to allow an Italian child to be given an American name taken from a soap opera. Good question. The other day I heard a mother in Lecco calling her small daughter Karen. She pronounced it CAHR-en – not ugly, but strange-sounding to both English and Italian speakers.

The article also mentions that it is illegal to give masculine names to females and vice-versa, which has stymied some parents who wanted to name their daughters Andrea. Pronounced an-DRAY-uh in Italian, it’s a masculine name, the equivalent of Andrew. In English it’s pronounced ANN-dree-uh, and is feminine.

An Italian colleague who moved to California discovered just how much trouble this can cause. He made a health insurance claim for a decidedly male complaint. When the check didn’t arrive, he called the insurance company to inquire. “This is obviously a fraudulent claim,” they told him nastily. “How can someone named ANN-drea have a prostate problem?”

Women in Italy don’t change their names when they marry. In the US this is the norm; most women when they marry change their surname to their husband’s, and there are simple, routine procedures in place for them to do so. It’s so usual that Americans are confused if you don’t do it. Years ago I asked the Adaptec travel service to reserve airline tickets for myself and my family, and ended up with tickets for “Mr. and Mrs. Straughan.”

Some American women don’t change their names, often for professional reasons, sometimes for political ones. Some couples hyphenate their two last names and give that as a last name to the kids. I always wondered what would happen if two such children decided to marry: would they create a quadruple surname?

In Italy, as far as I know, there is no legal procedure by which a woman could change her surname to her husband’s, even if she wanted to. In every context except the family, you’re still known by your own name, which saves headaches and maintains continuity on the professional front. Every doorbell has both names on it. On the other hand, the kids almost always get their father’s name, and it’s perfectly natural and normal to be called “Mrs. So-and-so” in some settings, such as your child’s school (perhaps simply because it’s easier for the teacher to remember).

Enrico and I got married in the US, but I never got around to changing my name, and neither of us gave it much thought. To the extent that I thought about it, I had spent so many hours of my life explaining both my names that I was perversely reluctant to give up the struggle.

I didn’t initially realize that women don’t change their names in Italy. When I began publishing articles in Italian magazines, I thought that my husband’s name might be easier for Italians to deal with. However, his great-grandfather was Swiss, so his name is neither Italian nor entirely easy, and I ended up spending almost as much time explaining that one as Straughan. And I didn’t like the look of it alongside Deirdré in print. So I switched back to Straughan, and have articles published under both names. The book was published under my own name (and Fabrizio’s).

The above sparked some responses. It seems that American women (and even one man friend of mine) change their names so that the whole family will have the same last name, though this desire is often complicated by multiple marriages with kids from various pairings. One friend told me about a couple she knows who wanted to share a last name in an equitable fashion, so they made one up, combining elements of each of their original surnames.

I’ve also known cases where women were glad upon marriage to give up an unappealing surname, and I had several responses were about that:

Sally: “I can think of lots of English names I would want to change. .. like Bosomworth, Ramsbottom, Drain. One girl I know refused to marry Ted unless he changed his name from Tiplady.”

And Judith: “I would change my name IF I thought my new husband’s surname better than my current one. One English girlfriend gave up ‘Loutit’ on marriage for the much more glamourous French ‘Dubresson’ – she was thrilled!”