My husband owns a Yamaha Disklavier, an acoustic piano with a digital interface that allows it to be controlled by, or to record into, a computer, usingMIDI. Today in Lecco, I had a chance to observe some of this instrument’s ancestors, part of a show by the Associazione Italiana Musica Meccanica (the Italian Association for mechanical music).

In a sense, these wonderful creatures are giant music boxes. We’ve all seen the cheap music boxes you can buy in souvenir shops: a wind-up mechanism attached to a small metal cylinder that has with little pins sticking out at intervals. As the cylinder turns, the pins brush across a series of graduated metal prongs, making a brief, tinny melody.
The machines I saw today went far beyond that. The gentleman shown above described his as the jukebox of its day – it’s even coin-operated. This “cylinder piano” and its kin were used in taverns and dance halls in Italy until the 1920s or 30s. In this model, the pins on the cylinder cause the piano hammers to trip just as a finger pressing on a key would; an octave and a half of metal chimes (on the left) add variety to the sound.

The solution to getting more songs onto a cylinder is track pitch (the distance between one track of data and the next – a term familiar in modern digital data storage). The closer the rows of pins, and the smaller the levers that read them, the more information (music) fits onto a single storage unit, in this case a large metal cylinder. The technology and know-how to create these cylinders barely exists anymore; one of the last people who could do it was videotaped demonstrating the process just before he died. 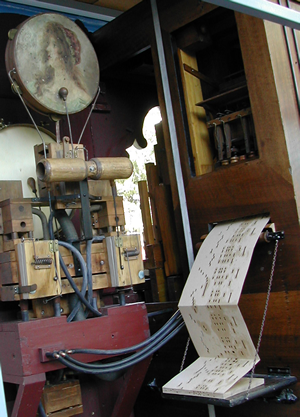 This huge, elaborate music machine (brought to Lecco on a 3-meter trailer) uses a punched-card system very similar to the Jacquard loom. The hinged cards fold up into thick little books, each holding a three- to five-minute tune: 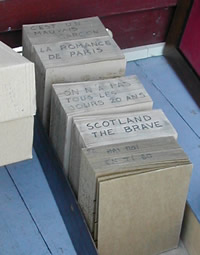 2018, a Retrospective in Pictures