Dino [DEEN-oh] is a common nickname for a number of names. This guy must have a sense of humor: “Dino Nosari” sounds like dinosauri – dinosaurs. 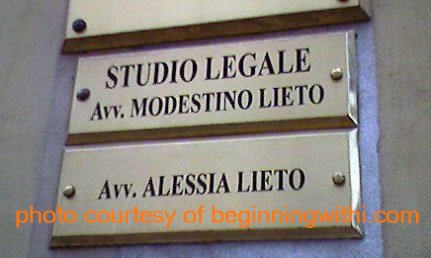 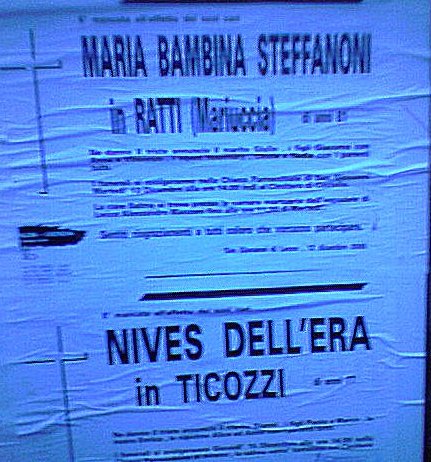 “Maria Bambina” I suppose refers to the childhood of the Virgin Mary, but seems an odd choice of name. No wonder she was nicknamed Mariuccia [mahr-ee-OOCH-ah] (“cute little Mary”). Then she married into the Rats (Ratti).

Nives I’ve heard before, but would have thought it a Spanish name. 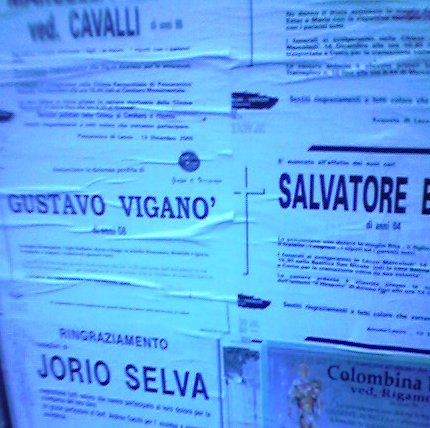 Upper left: somebody, widow of Horses 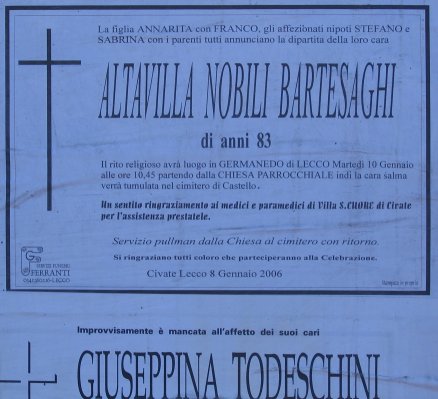 Marshall reminded me of a very funny and supposedly true case in Italy. It requires some explanation: When a woman marries, she is formally known as “Maidenname Firstname in Husband’s Surname,” I guess “in” signifies that she has married into the husband’s family (though I’ve only seen this construction used in death announcements). So there was a lady with the surname Milolava (“I’ll wash it”) whose parents rather cruelly named her Domenica (Sunday). She married a Signor Piazza, so she became “Sunday I’ll wash it in the piazza.” What “it” may signify is up to your imagination.

Really, some parents ought to be shot for how they name their kids. Years ago, in Washington, I had a data entry temp job for an insurance company. One of the records I entered was for a woman named Candy Caine. Evidently her parents wanted her to grow up to be a Playboy Bunny.

Ivo wrote me about his friends, interestingly surnamed “Della Bella” (of the beauty), who have relatives with the unhappy surname “Della Morte” (of death). So what did these sadistic parents name their child? Angelo.

And another in the series: “What were your parents thinking?!?”