Last Sunday Tin Tin and I went to Rocky Mountain National Park. It was a beautiful drive from Boulder, through Estes Park (which is a town, not a park) and on up – and up, and up. At its highest point, the Trail Ridge Road is something over 12,000 feet in altitude (and, obviously, closed by snow for much of the year). On this particular day, the last Sunday before school starts in this area, it was also very crowded – we gave up on the Alpine information center because the parking lot was full. 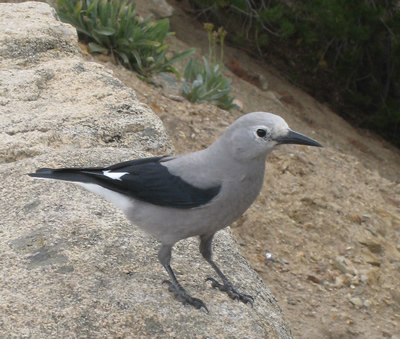 < This cheeky fellow came very close, hoping for a handout of trail mix – not likely to happen, given all the dire warnings posted about feeding the animals and the presence of a park ranger six feet away!

We continued down the other side of the Continental Divide to Grand Lake, then doubled back into the park to take a walk which, according to the guidebook, was supposed to be “easy.” (More on that later.)

I’d just heard about the havoc being wreaked by mountain pine beetles: my friend Sharon, with whom I had dinner in Boulder a few days ago, had seen huge swathes of destruction on her drive up from New Mexico (and had overheard a tourist ask a park ranger: “Where can I get one of those pretty red trees?”).

We saw some evidence of damage on the eastern side of the range, but far, far more on the western side: 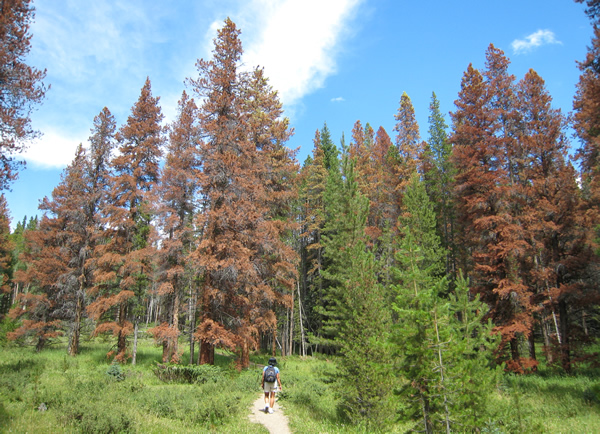 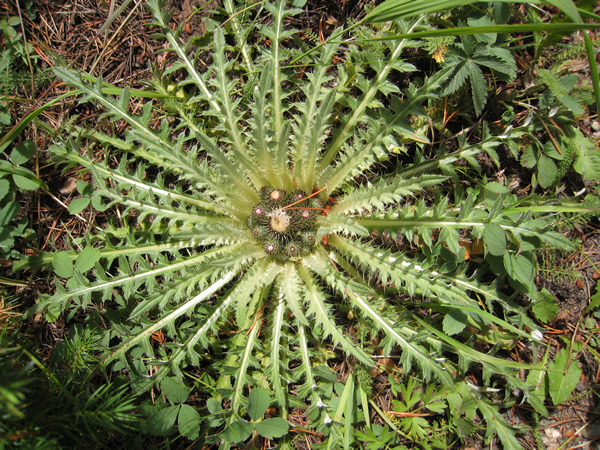 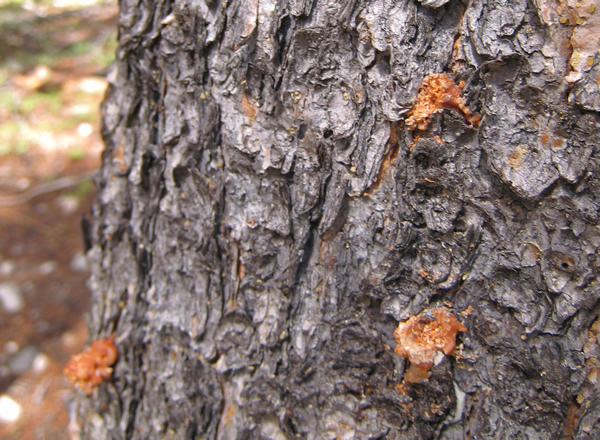 The tree above has been recently attacked by beetles: the blobs of sap show where they tunneled in to lay their eggs. Healthy trees can produce enough sap to overwhelm a few beetles and drive them off, but these trees are weakened by prolonged drought, and in the last few years the region has not seen the sustained bitter winter temperatures needed to kill eggs and larvae already inside the trees. 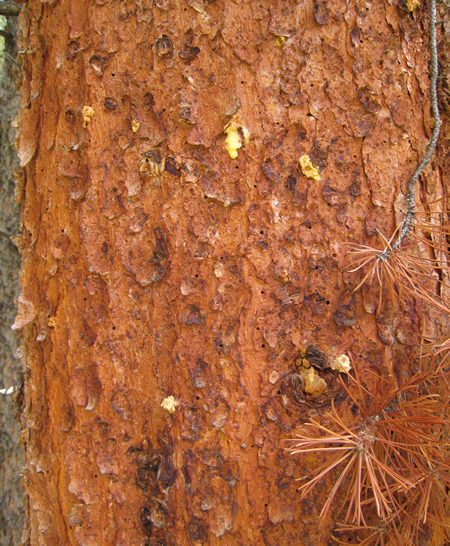 ^ This tree is much closer to death, hence the red color (and many, many holes). 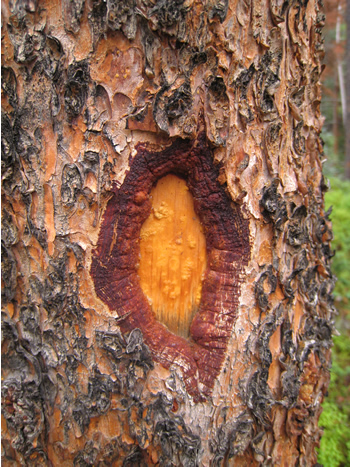 ^ I don’t know what caused this, but it’s sort of pretty, though probably a bad sign for the tree. 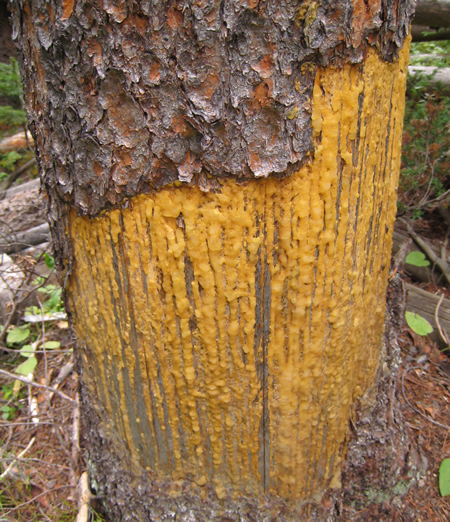 < Dunno what caused this, either. Possibly the bark was stripped off by rangers investigating the infestation.

^ …and this one’s not beetle-related, but just plain scary! 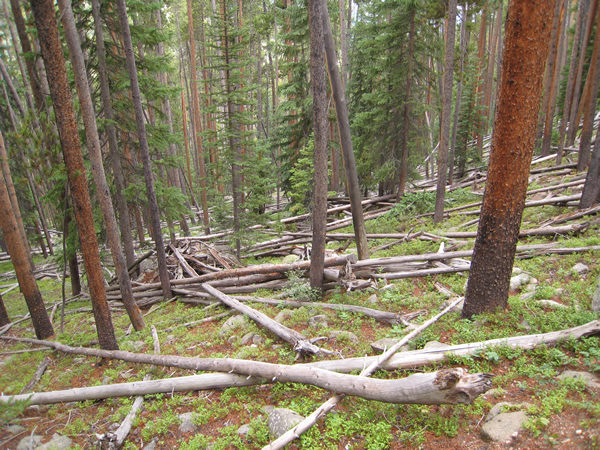 This beetle attack has been going on for years, and many trees have fallen. By some estimates, 90% of Colorado’s lodgepole pines will be lost before this is over. 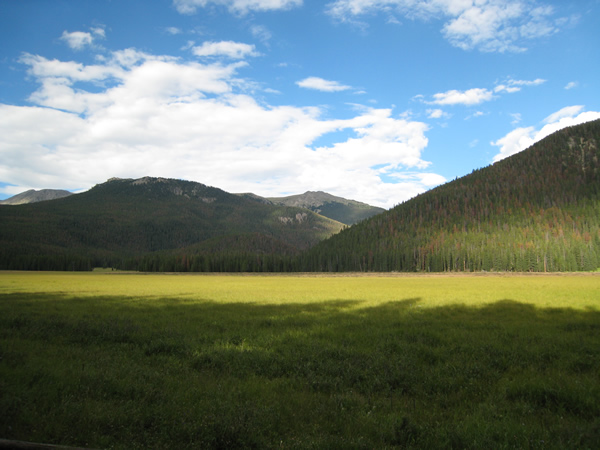 Of course there is still great beauty in the park, and always will be. Some areas are relatively untouched for now. 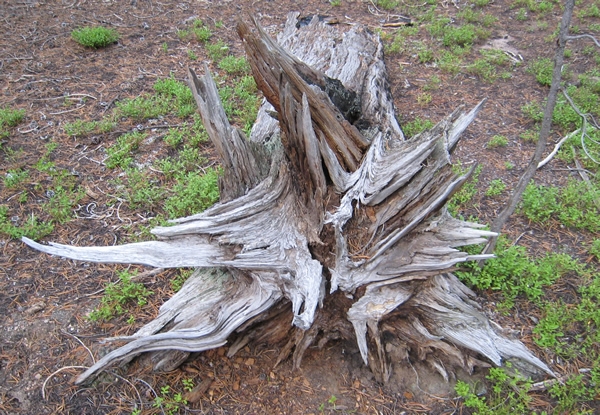 ^ But reminders of tree death are everywhere. 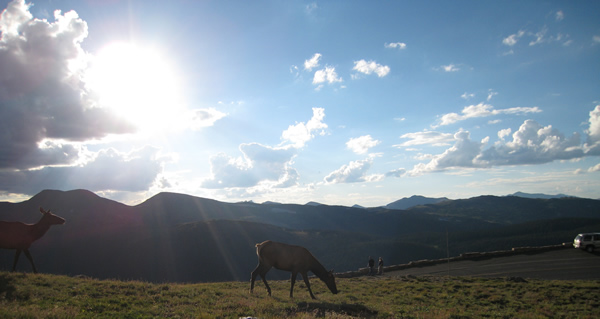 Apparently the increased sunlight to the forest floor improves the forage for elk, who certainly seem to be thriving – and completely unafraid of all the humans stopping to take pictures of them. 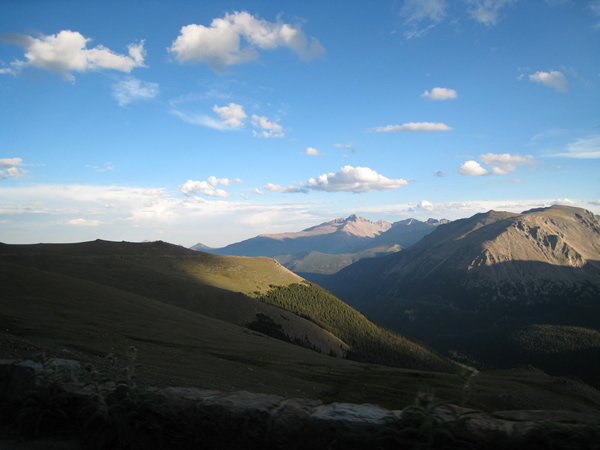 ^ This was taken back on Trail Ridge Road, above the tree line, as we returned home in the evening. Very reminiscent of the high Alpine terrain in many parts of Italy – but this is higher.As for our hike… it took us three and a half hours to cover six and a half miles – not “easy” by any definition of mine! My knees and hips were screaming, although, fortunately, the steeper path was on the way up.On the way home we stopped in Estes Park for dinner. I had buffalo burger – bison is ranched for meat in this area, and widely available, even in the Sun cafeteria. It’s a flavorful meat, and supposedly healthier than cow beef. We also had a couple of excellent local wheat beer micro-brews.