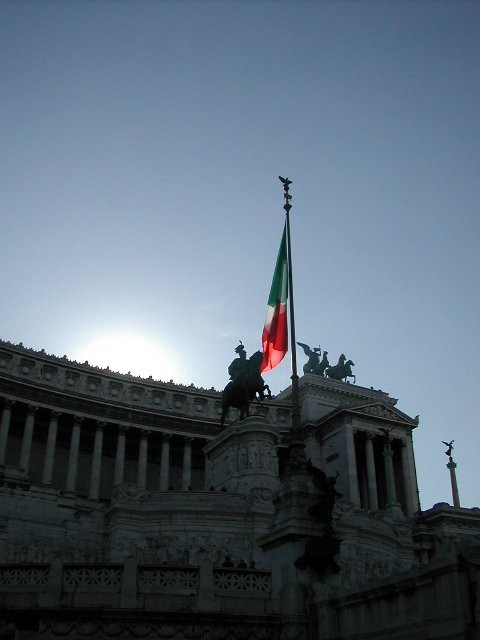 Italians are not much for patriotic displays. You rarely see Italy’s ‘Tricolore’ flag flying, except during World Cup soccer. During his first run for office ten years ago, Silvio Berlusconi brought to Italian politics the very American notion that ‘flag = patriotism = [my] political party’. Billboards for his Forza Italia party were swathed in red, white, and green. As owner of the popularÂ AC MilanÂ soccer team, he also managed to mix sport into his message: ‘Forza Italia’ (‘Let’s Go, Italy!’) sounds like a cheer for the Italian national team – no accident, of course.

As I recall it, that election coincided with a World Cup, or maybe it was a European championship. At any rate, between that and Berlusca, there were Tricolore flags everywhere. I asked my daughter, then three years old, if she knew what that flag meant. “Oh, yes,” she said brightly: “Those are the colors of Milan” – the football team!

photo: The Tricolore flying at the Vittorio Emmanuele monument in Rome.