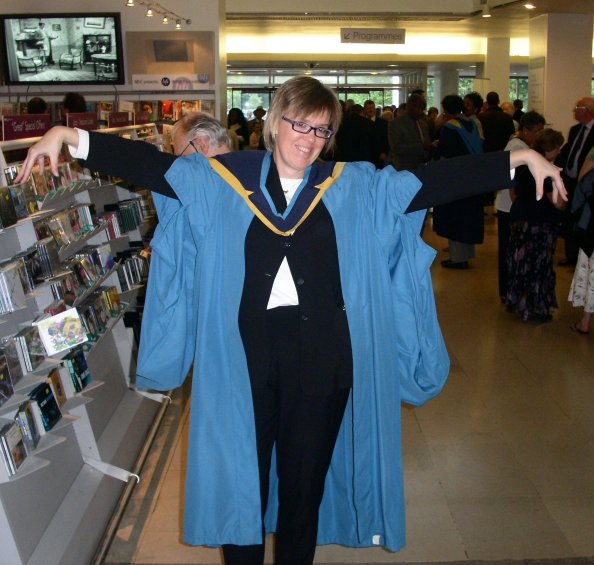 top: The very medieval scholar’s robe. I suppose the bag-like sleeves were originally intended for carrying around one’s scholarly scrolls.

I went to London to collect my MBA from the Open University. Attending the ceremony was not obligatory, but I’d missed my BA graduation, and thought it would be fun to do the cap and gown thing.

The ceremony was held at the Royal Festival Hall, where we were supposed to arrive early to collect our (rented) gowns and have official photos taken. The Open University holds around 20 such ceremonies every year, giving graduates a broad choice of places and times to attend. Several hundred people were present that day to collect degrees from BAs to PhDs in every conceivable subject, accompanied by their beaming families. 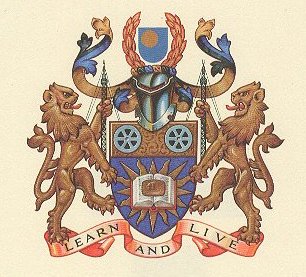 We were a representative slice of what is probably the world’s most diverse student body. The Open University was founded (in 1967) to open up education to people who otherwise had not had and might never have the opportunity to pursue a university degree. The institution has succeeded wonderfully at this. Few of the graduates were the usual college age; the oldest I saw looked to be well into her 70s, and she wasn’t the only grandma in the group. Many were non-white, with a large contingent from Africa (Somalia and/or Ethiopia, I think), where the OU has been operating for years.

Most of us graduates didn’t know each other, but each had a small cheering section of family, in my case my dad and his wife Ruth, but it was more common for graduates to be attended by their spouses, children, and even grandchildren!

At first we clapped and cheered everybody, but that got tiring. Ruth told me later that she settled on a strategy of applauding the oldest, the least-advantaged, and the handicapped. Judging by the volume, much of the audience made the same choice. An elderly black lady with gray hair got a huge ovation, startling the Dean of Students who was performing handshake-and-congratulations duties. He asked her something, then turned to the audience with a huge grin and shouted: “Five grandchildren!”

Like everyone else, I rented the gown and hood, and was carefully allocated the items pertaining to my newly-attained qualification. The pale blue robes are for Masters (Bachelors wear dark blue, Doctors shiny electric blue).

Note the carefully-arranged hood, proving to anyone who understands the arcane codes of these things (it depends on the colors and even the width of the trim) that I have an MBA from the Open University. I now have the right to wear this get-up at any future academic “congregation” I attend, until and unless I earn a still higher degree. Of course, I would have to actually buy the thing for any such occasion…

If you’d like to learn more about the Open University, there’s a new site (2014) for students outside the UK and Ireland. 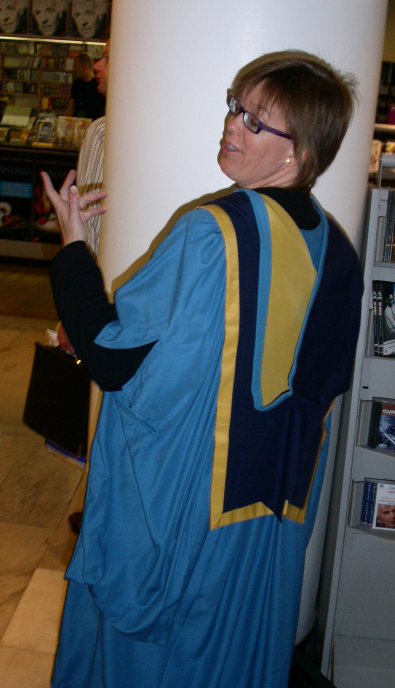 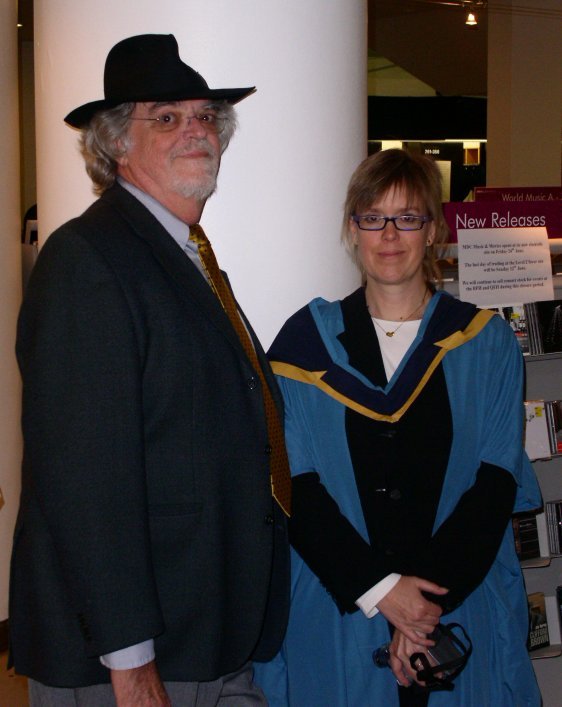 er, do business? I learned this week that I’ve passed the exam for the last course in my MBA from the UK’s Open University. So I can now put “MBA” after my name on my visiting cards, as is the custom in some parts of Europe. (I’m not sure it will do me much good in Italy, where few people know what an MBA is.)

I started this degree in 1999, when I realized that, if I had had to apply for the job I was actually doing at Adaptec, the description would have said “MBA strongly preferred.” My original intent was to show my bosses that I was serious about my career, in spite of the strangeness of my situation (working long-distance from Italy for an American company).

2 Replies to “MBA: Collecting My Dues from the Open University”