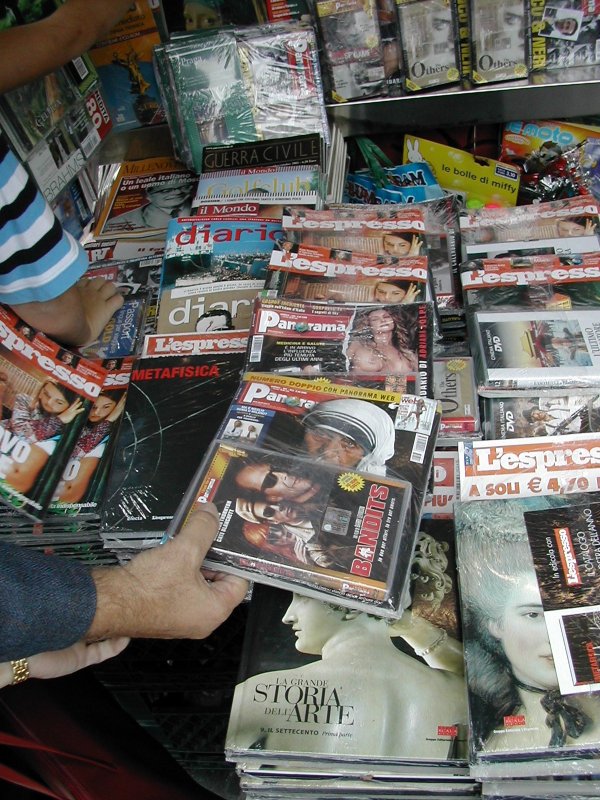 In Italy, for reasons that I will go into some other time, most shops are closed on Sundays. You can go to a restaurant or bar, sometimes you can buy fresh bread in the morning, and there’s always one pharmacy open somewhere (though you may have to hunt for it). But, even if you’ve been working or going to school Monday through Saturday, you can’t do any shopping on Sunday.

This is a sin and a shame. Shopping is a basic human instinct; it is cruel to give people a day of leisure, and deny them the opportunity to spend money during that day.

It is my firm belief that the Italian newsstand (edicola) exists for this reason. “Newsstand?” you may be wondering. “What kind of shopping can you do at a newsstand?”

Magazines and newspapers, of course, but not only. Italians don’t read much (according to laments from the Italian publishing industry), so they cannot be enticed to buy much for the mere sake of words printed on paper. There has to be a “gift” as well, sometimes included in the cover price, sometimes at a “special discount” if you also buy the newspaper or magazine.

Often this gift is more print, preferably in large series to encourage you to keep buying. Books published this way have run the gamut from classics to encyclopedias to comics. In the last couple of years I’ve seen two or three different gorgeous series of art books, and several of cookbooks (first by ingredient, then by region). Now we seem to be moving on to religion, with a newly-advertised series of “the great religious books, lavishly illustrated.”

A popular enclosure nowadays is a DVD, cheap at 5 to 10 euros. The great thing for us foreigners is that, unlike their VHS predecessors, these include the original-language soundtrack as well as the dubbed Italian – and it used to be so hard to find films in English!

Films, too, run in series e.g., the complete Woody Allen. Themed film collections distributed in this way can mix and match from various film studios, so you can collect (starting now) every film ever made based on a comic book. This follows two different print series of comics published in the last two years. I bought some of those, to add to my already eclectic comic collection; it was a nice, cheap way to get acquainted with some artists unfamiliar to me.

Some publishing houses baldly cash in on the human instinct to collect, dispensing with newspapers and magazines altogether. Each year brings new sets of “collectibles,” in monthly editions. “Accurate reproductions” of timepieces, or toy cars, or kitchen utensils, each with an explanatory pamphlet (I guess they have to include some paper, to qualify these items to be sold at the edicola).

So Italians out on their passeggiata (a leisurely stroll after a heavy Sunday lunch) can satisfy their shopping instinct at the edicola. Maybe it’s all a government plot to get people to read?

One thought on “Would You Like an Encyclopedia with That?”