[formal complaint to the police] – Too lively: the janitor insults and threatens the children

Writing and drawings defame the principal of Grassi high school 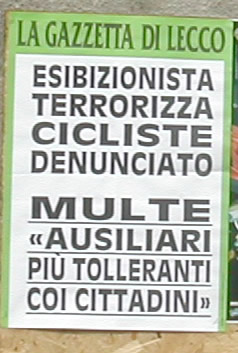 Fines “Auxiliary [traffic police] [should be] more tolerant with the citizens”

Three climbers fall from the wall of the Medale and die

“They were absolved, but they are the murderers”

The Sheikh in Lecco

The tragedy of San Martino [peak]: The truth in two nails [climbing pitons]

Post office: [office in] via Dante closes, but the ex-Piccolo [another location] does not open