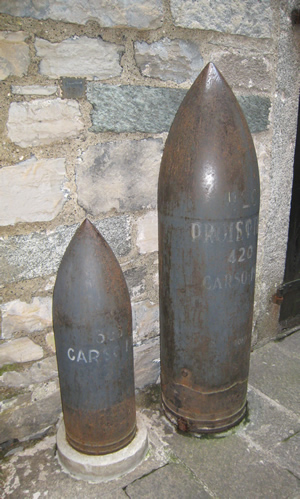 Many parts of Italy were severely bombed (by all sides) during WWII, but quite a few of the bombs landed without actually exploding. Some were buried in rubble and went undetected at the time, so every now and then they turn up when someone’s digging for construction or utilities. Today 55,000 people were evacuated from their homes in central Milan and the area cordoned off while aÂ450 kg bomb was disarmed, removed, and transported outside the city, where it will be exploded. The central railway station is closed and the metro is not running in certain areas.

Other than the disruption to civic life, this is no big deal. There have been probably twenty of these things since I’ve come to Italy, some big enough, and badly enough placed, to close a highway and/or major railway line for an entire day. But so far there has never been an accident – nothing’s gone off when it shouldn’t.

The photo above was taken at Lecco’s civic museum