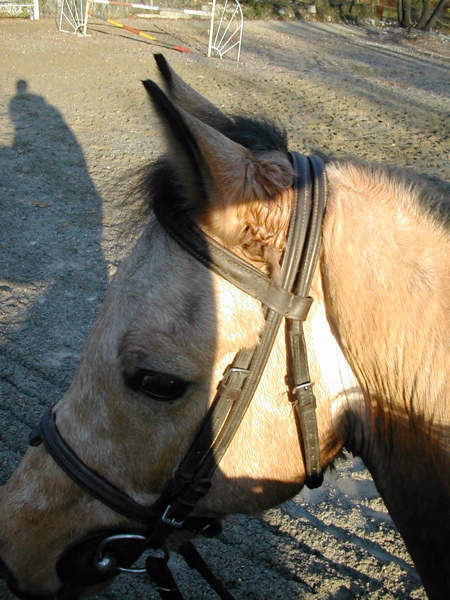 I mentioned long ago that my daughter and I both love horses, and that we’ve had one (for her) since 2001. Now, very sadly, we are having to say goodbye.

Ross had already been riding for about four years when I finally decided (and had the opportunity) to buy her a pony of her own. We went to England to look for one, because ponies are a lot cheaper there – even counting the cost of our trip and then transporting him to Italy, we paid about half what we would have in Milan. But the buying is only a small fraction of the cost of a horse…

In retrospect, it’s a sad irony that we found Hamish and agreed to buy him on September 8th, 2001. We returned to Milan on the 10th and, as everybody knows, the world changed on September 11th. Had I known then what I know now about the world economy and my personal finances, I probably would not have started down the path to horse ownership.

Back then, it didn’t seem so crazy. I had plenty of money in the bank from my Silicon Valley heyday, and the prospect of making more freelancing for my former employer, Roxio, writing manuals for their European software WinOnCD. (In fact I did write manuals for versions 5 and 6, and was set to do that and more for version 7, when Roxio closed its German office. WinOnCD – and many people’s jobs – vanished.)

We kept Hamish expensively at a snobby stable in Milan for two years. Ross rode a lot, but never won any show jumping competitions, in part because Hamish is… difficult. There are ponies that, if you more or less aim them at a jump, will do everything they can to get you over it and win for you, no matter how badly you ride them. Those sorts of ponies cost a lot, and Hamish isn’t one of them. He requires to be ridden very well, which Ross did, but not quite well enough.

We also had some friction with Ross’ riding instructor, I suspect partly motivated by the fact that we had not bought Hamish through her, so she didn’t get the customary cut on the purchase. Whatever the reason, this instructor had no patience with Hamish’s foibles, and kept nagging us to sell him and buy a better. Even had I had that kind of money (oh, say, $15,000), that was not the lesson I wanted my daughter to learn about horses and sportsmanship. To me the point was never “spend as much as it takes to win,” but to develop a loving, trusting relationship with an individual animal, and win whatever you can, together, in harmony and friendship.

God help me now, that loving, trusting relationship is exactly what Ross and Hamish had. She sometimes grew frustrated with his stubbornness, tired of feeling foolish in front of her peers at competitions, but she stuck by him and defended him, and was praised by some other parents tired of their kids’ endless (expensive) litany of “If I only had a better pony.”

By the time we moved to Lecco last summer, financing a horse was becoming a problem, and we all heaved a sigh of relief to be paying far less to keep him, at a place where he could even be out in a field every day. But we couldn’t find near Lecco a reasonably-priced stable which included professional instruction. And, now in high school, Ross has less and less time; as I’ve mentioned, her curriculum at liceo artistico requires a school week of 35 hours, which, along with homework, leaves little time for anything else.

Ross continued to ride as much as she could, until she broke her arm a year ago, falling off Hamish onto frozen ground. That put her out of action for several months. She rode a bit in the spring, then the remainder of the school year was a mess – between extra tutoring and lots of studying, there was simply no time. In the summer she was happily away at theater camp for six weeks, rode a bit when she came back, and then we were in the throes of moving again.

In sum, Hamish has been left largely to his own devices this year, and is now out to pasture, not being ridden, and increasingly unrideable. With the new house, family finances are squeezed to the point that we can’t afford to just keep him (at 12 years, he’s not quite in his prime, but nowhere near retirement, either), nor do we have the time or money to put into riding him the way he should be ridden. So we have come to a parting of the ways.

It’s far easier to acquire a horse than it is to get rid of one, if you care at all about where it ends up. It would be easy enough to sell him to a horse dealer, but he’d probably end up at a slaughterhouse – this is Europe: people eat horses, and wear them.

The solution we have found is a stable on Lago Maggiore, where some friends keep their horses and ride, and we know the owners fairly well. Most importantly, we like their attitude towards and handling of horses. They may eventually sell him (and we might even get a cut), but they won’t sell him off to just anybody. They’ll do their best to find a good home for him and, at worst, they’ll just keep him. Ross can even go and visit from time to time.

Hamish leaves tomorrow morning. It’s a horribly painful loss for Ross and me both. I wish I could spare my child this. I almost wish we’d never started. But, on the other hand, horses have given her so much, and can still give her so much more, and she them. I can’t regret it. I can only hang on, and help her to. This time tomorrow, it will be over, hopefully without any last-minute getting-Hamish-into-the-van traumas. It will be over, and Ross and I will have survived it. Somehow.