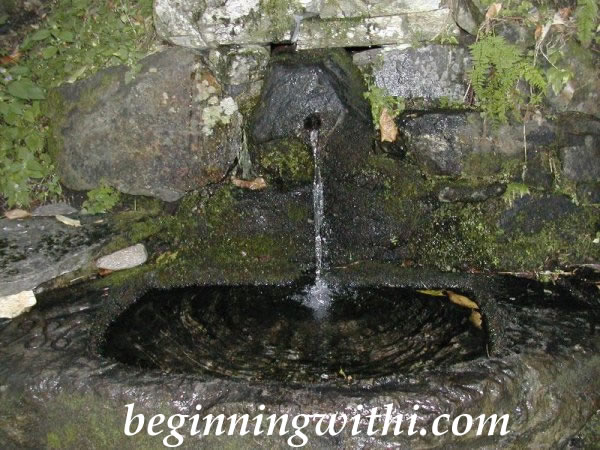 On Sunday Enrico and I woke up early, not wanting to waste what promised to be a beautiful end-of-summer day. We drove north through Chiavenna (stopping along the way for a second coffee and a slice of strudel) and up the tiny mountain road that leads to our favorite restaurant, la Lanterna Verde. Just beyond there we stopped for water: we save up the plastic bottles from mineral water, juice, etc., and refill them (dozens at a time) with good mountain water. Not that there’s anything wrong with our tap water, but mountain water tastes better, and is free. And it’s easy to find: every mountain community in Italy has an open tap connected to an underground spring. Traditionally this was where people got water for their homes, and washed their clothes (the wide ledges on the lower trough of this fountain are designed for scrubbing). 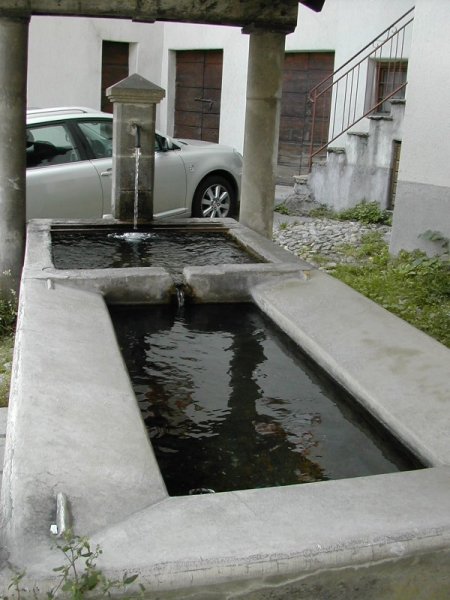 We got our first batch of water at a fountain in the woods near the village of Chete, which had been recommended to Enrico by some locals during an earlier visit, as having particularly good water.

Though the water was very good, we didn’t fill all our bottles at the fountain above – it was a bit of a walk back to the car carrying them.

We drove on and parked near the village of Canete, at the point where the road becomes “permit only,” such permits being given (we would later find) to people who have summer homes up on the mountain. 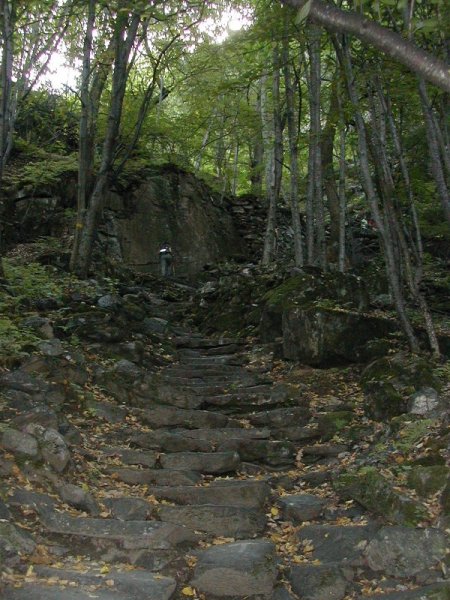 From here we started up a path that was around 400 years old (according to something Enrico read somewhere), a lot of which looked like this the above, a granite staircase, built into the mountainside, going up and up and up… These paths were built to reach the alpeggi (Alpine pastures) and malghe – buildings where cheese is made.

In the typical example below, the spaces between the logs are not sealed, so there’s plenty of air flow. There are dozens, if not hundreds, of these buildings all over the mountains in the area, though many are now in disuse – few people make their own cheese nowadays. (Those who do are very good at it – the bitto cheese made here is similar to parmigiano, but wilder, being made from the milk of cows and goats that pasture in the high Alps all summer.) 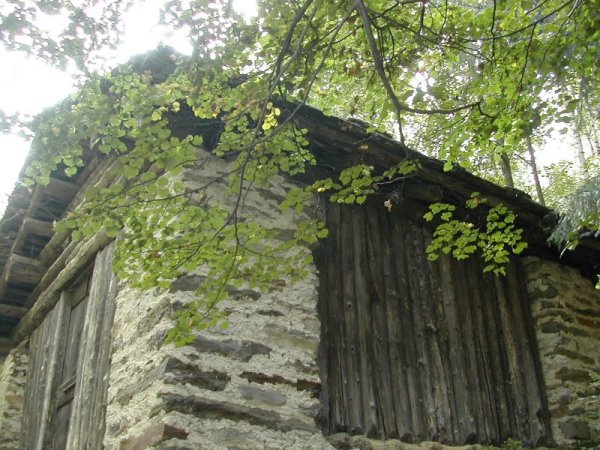 We stopped early to eat part of our sandwiches, at an open space on the mountainside where several families had built or were building summer homes. A man sat up on a scaffolding, sanding (by hand) the end of a wooden beam. It must have been his own house, because no one would be working for pay on a Sunday. All these little houses had photovoltaic panels on their roofs, probably just enough to power a few lightbulbs – the usual water, gas, and electricity lines don’t reach up there. 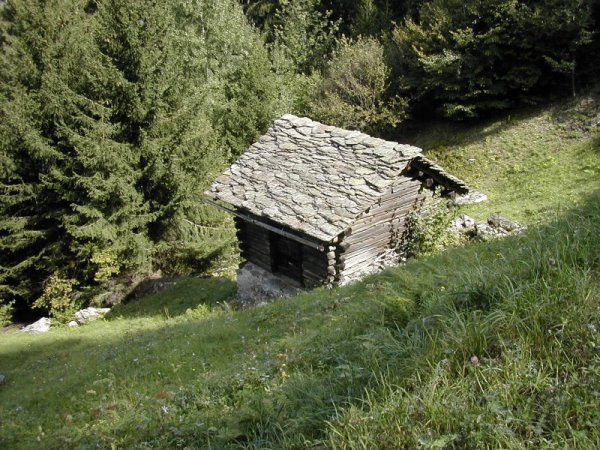 Here’s an example of a different kind of mountain hut, likely used for storage as it is smaller and more tightly sealed. I love the stone roofs.

Somewhere along this road we came to a fork with signs pointing to Monte Cantone in one direction, and “Tabia Dasci” in the other. We had no idea what Tabia Dasci might be, but it was probably closer than Monte Cantone, so we went that way.

We crossed paths with a dozen or so people along the way, many of them coming back down from an early-morning mushroom expedition – with enviable hauls of porcini (boletus – Italy’s favorite ‘shroom). Any mushrooms left in plain sight were likely to be poisonous. (And some, even to our untutored eyes, very clearly were.)

We eventually reached what must have been an ancient village, with many buildings still standing. I’m not sure whether these clumps of rock had also once been buildings, or had simply been piled up to clear the pasture land (there was evidence of goats in the area). 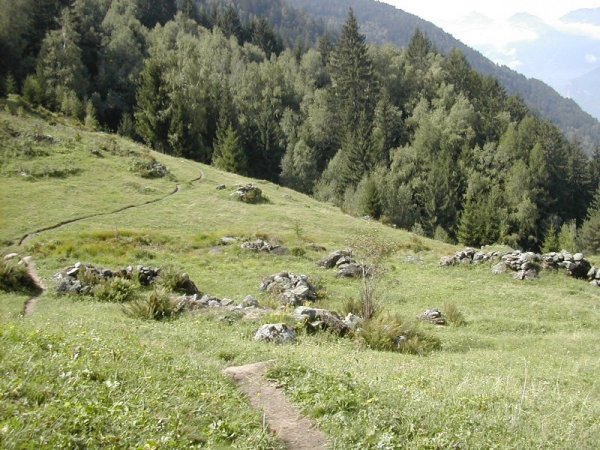 The old malghe here were all in good condition and possibly still in use, while many of the huts had been turned into comfortable vacation cottages. 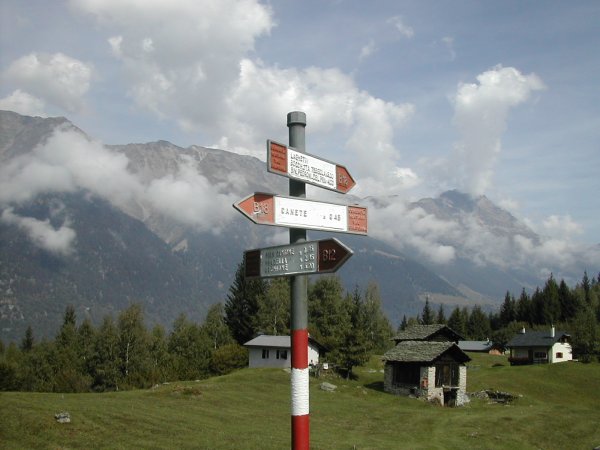 Only for fairly hardy residents, however – the road had ended some way down the mountainside, at least 20 minutes’ stiff walk from here.

Tabia Dasci proved to be this house (why it had its own signpost we never did find out): 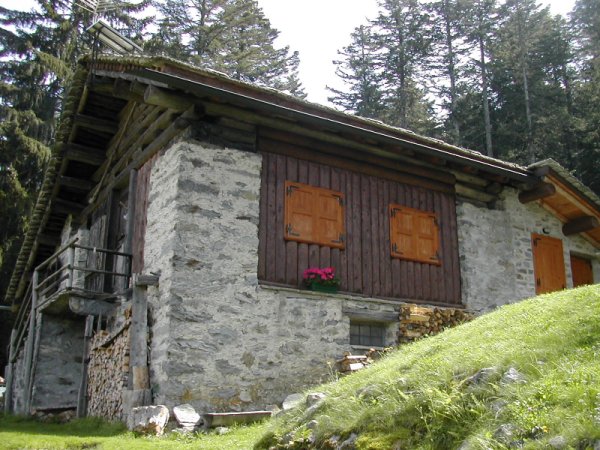 …which I photographed mainly for the geraniums. They look charming, and someone must have gone to a lot of effort to get them all the way up here!

Its owner directed us, in a thick, non-Italian accent (his house is only about a kilometer from Switzerland), to the laghetti (little lakes) further along the path, but warned us that they were hardly there – no water. And in fact, though we could see the bed of the stream that probably had fed them, we never found any water at all.

It’s likely that the man at Tabia Dasci is the only person who lives up here year round (if he does). In spite of the community’s isolation, the local health authorities keep an eye on garbage disposal. Residents have to send their garbage down the hill on the teleferica, a cable car for goods that runs up and down the mountain on a weekly schedule: 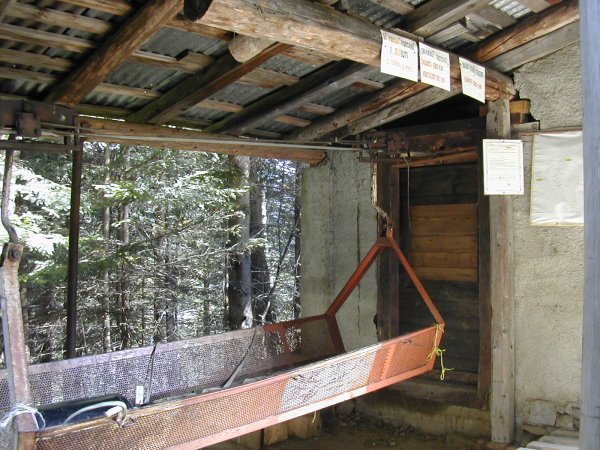 ^ Here you can see it loaded with somebody’s gas cannister, ready to go down for exchange and refilling.

We couldn’t ride the teleferica down, so we had to retrace our steps part of the way on the steep path, til we reached the mostly-paved road. That was the longer way back than the granite stairs, but easier on my knees. 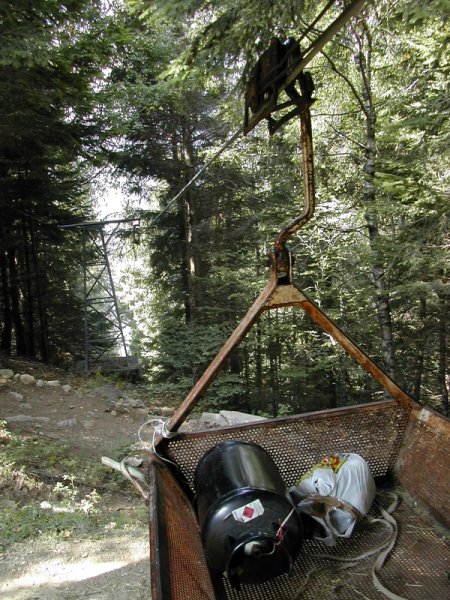 We stopped in Chiavenna on the way back to sample the Sagra dei Crotti (food festival of the local cavern-restaurants – more on those some other time!). I was hungry again from all that walking and happily put away a serving of luganega (the local sausage) with polenta.

We had also picked up some local food to take home: bisciola [bih-SHOAL-ah] – a round, lumpy-looking cake, heavy with dried figs, raisins, and nuts – and a tub of promising-looking jam made from wild blueberries.