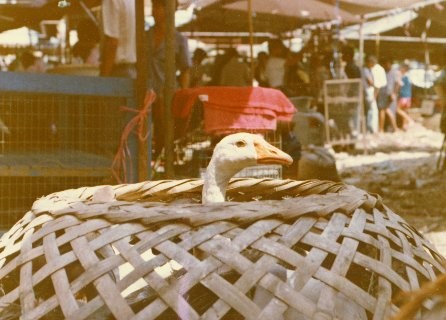 When I was growing up in Bangkok 1967-71, one of my favorite places to go was the Saturday-Sunday Market. It was big even then, with sections devoted to food (the smell of dried fish raises warm memories for me), housewares, clothing, and live animals. I don’t know now whether any of those animals were intended for eating, but many of them were there to find homes as pets. Over the years, we tried out parrots, white mice, hamsters, fish, and of course cats and dogs.

We stayed mostly on the mundane end of the pets spectrum, but others literally went wild. It was something of a fashion among expats in Thailand in those days to keep gibbons as pets. We never tried this, probably because my parents’ observed others’ experiences: it is hard to raise a wild gibbon as a pet. I have seen one instance where it went well: the gibbon was treated as part of the family, eating at the low, traditional Thai-style dining table with them, with table manners at least as good as anyone else present. More often, pet gibbons became uncontrollable and bitey and had to be got rid of.

Another family we knew had a river otter, which was an absolutely charming pet. It ran around the garden with their five dogs, play-fighting with them as animals do. The otter was low to the ground and had a particularly dirty tactic of coming up underneath the dogs and biting them in tender places. I met this otter and fell in love with it probably around the time I saw the movie Ring of Bright Water (which traumatized me – I could never bear bad things happening to animals).

There was another place besides the weekend market to find exotic pets and once, as a sort of field trip, my family went there. It was an exotic animal dealership out in wild land somewhere outside of Bangkok. I don’t know how they were obtaining the animals – unfortunately, it may have involved killing the wild mothers and then raising the young to be comfortable with humans. All I knew at the time was that it was like a wonderful zoo where I could actually get close to and pet the animals. They had a moon bear, civet cats, and I don’t remember what else – probably some gibbons as well.

They did succeed in breeding some animals themselves, including snakes. A large female Indian rock python had recently laid over 100 eggs, and we went home with one of the babies. We named him (or her) Snavely, after a character in Pogo.

Snavely was an easy pet, and also great for impressing other kids. He only ate once every three weeks, when we would buy a live chick from the market and put it into his cage. Snavely was usually curled up quietly in a corner, somewhat camouflaged by the leaves in the bottom of the cage. The chicks would always seem to realize that they were in danger, and would race around peeping madly, sometimes stepping directly on Snavely – which formed my present opinion that domestic chickens are too stupid to live. Suddenly, there would be a lunge too fast for the human eye to follow, and the chick would find itself wrapped in coils, being squeezed to death. Then would come the slow process of the snake unhinging its jaw to get it around the chick (which was twice its circumference) and ever so slowly swallowing it. The lump would be visible for days, moving slowly along the snake’s body.

Once Snavely had finished digesting, and when he wasn’t shedding, he could be safely handled, and would even appear affectionate to anyone who had body heat to share. He did bite my mother once, when he was sleeping on top of something and her hand coming up to grab him startled him.

We had Snavely until we were getting ready to leave Thailand. I guess we weren’t able to find anyone who wanted a pet snake (not even my mother, who was staying behind in Bangkok), so we let him loose in the forest.

(The photo above is the only one I have of an animal in a Thai market. This was most likely taken in Khon Kaen around 1980.)

Moths
A Peculiar Experience of Privilege: Part 1
The Boys’ and Girls’ Book About Divorce
Family Lies