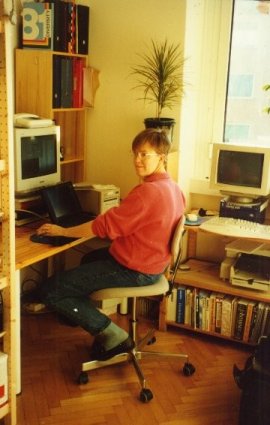 I began working from home in 1993, from Italy, for a California company. Other remote experiences have included working in San Jose for Ericsson (HQ in Sweden), and working for AWS (HQ in Seattle) from my home in San Jose, and now from Australia.

In some ways, I wish I had spent more of my working years in  a “normal” office routine. Working intensely side by side every day, with people you like and respect, is a fantastic feeling, and at times I’ve had that and enjoyed it. But other times workplaces went toxic, so that going into the office every day became a torment to be dreaded. I’ve also had working from home situations go bad, and at those times I dreaded getting up to face my computer every day, even if I didn’t have to directly face the people who were making my life hell.

Often, remote work was the best option available to me. When my Italian employer moved most of the company to the US and then sold out to a US company, continuing in that job was the best paid and most interesting work I could have while still living with my family in Milan.

Remote work has literally been a lifesaver for me. When I began working for Ericsson, I expected to go into a San Jose office most days and make quarterly trips to Stockholm. Then I was diagnosed with cancer. I had been in the job for less than six months, so I couldn’t take medical leave without losing all my income (yes, the American health system is seriously fucked up), and I didn’t have the savings to take a year off without pay. But I didn’t want to stop working – I could think of nothing worse than sitting at home with nothing better to do than think about dying. Fortunately, my employers were flexible (though the insurance company wasn’t), and I was able to work as much as I wanted to – from home: for my own safety, I couldn’t into an office while undergoing chemotherapy!

I started working mostly from home soon after beginning my current job at WAS in 2017. The team I joined all traveled so much that it was hard to be in the office at the same time. I’d make specific plans to have lunch with colleagues, or for meetings, otherwise I was doing everything online even before the pandemic hit. The sudden shift to remote work for everybody held no terrors and few surprises for me.

The number of meetings I had to attend online increased, especially after I changed roles last July. Six or more hours a day of video meetings are exhausting, but at least we were all attending virtually. Remote attendees are at a disadvantage in video/phone meetings with people who are together in a room. Human beings interact more naturally with those who are physically present with them. Having everyone attend via video can level the playing field, giving all a better chance to participate equally (yes, there are other factors that get in the way of equal attention and interaction).

A remote employee is also at a disadvantage when others are in the office together. Physical facetime with colleagues is important, and if you can’t get it every day or every week, you should at least have it every quarter. I used to travel from Milan to Milpitas four times a year, and later from San Jose to Stockholm for extended stays.

In a pandemic, that kind of travel isn’t wise even if it were possible. It’s not legal for me to leave Australia right now and I don’t know when it will be. Travel between any two countries is likely to be uncertain for years to come, depending on the relative virus and vaccination status of each.

Given the failures of governments and human behaviors, and the success of the virus, this pandemic is far from over. And it likely won’t be the last – the conditions that created this one have not changed, and it was and will be only a matter of time until a(nother) pathogen breaks out to conquer the world.

I therefore believe that the companies who imagine they will soon bring employees back to “the way things were” in the office are indulging in wishful thinking. Things will never again be exactly the way they were, for a host of reasons. We’d be wiser to direct our energies and attention to how to make the best of the way things actually are, and are likely to remain.