We’re having a big snowstorm in Colorado today, so I have been discussing with some local colleagues on Twitter how to measure accumulations. I haven’t lived around snow much (til I moved to Colorado last year), so I haven’t done this much before.

@vdotw advised “Measure [with a ruler] at a flat spot, like an outside table.”

Well, okay, we have lots of outside tables at Sun’s Broomfield campus, but they all seem to have accumulated different amounts of snow:

This one (shown at far left in the photo above) had about 5 inches:

This one looked more promising:

So what am I supposed to do here? Take an average?

It’s little things like this that remind me why I love this country. 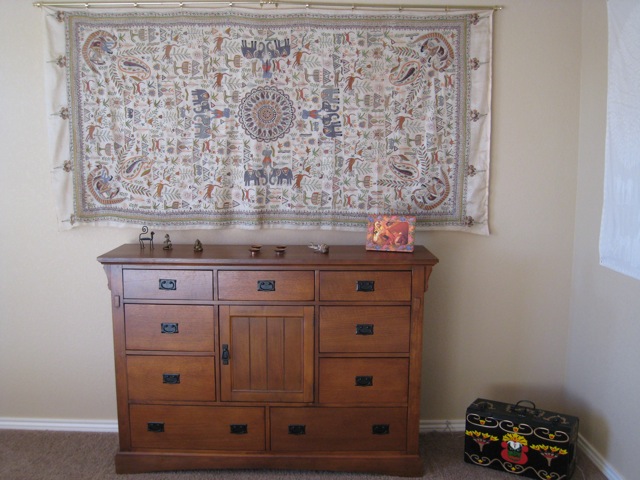 ^ Memories, new and old: An embroidered silk hanging from the Central Cottage Industries Emporium, Delhi, which I bought during an epic shopping spree with Yuti, and the decorated tin trunk I bought in Mumbai from artist Rashmi Dogra while visiting Deepu, combined with an American mission-style dresser. The objects on the dresser include figurines bought at the Crafts Museum in Delhi, diyas, a piece of driftwood from Gouverneur Beach in St. Barth’s, and a photo (in a Kashmiri frame bought in Mussoorie) is of Rossella and friends in a Woodstock production of The Taming of the Shrew. On the wall to the right you can see the edge of an appliqued wall hanging I bought with Sara during a visit to Mumbai.

I’ve been residing in Colorado since last March, but during that time have been traveling so much that it’s taking a while to get settled. What I’ve done so far towards setting up my home reminds me of my college days: starting from scratch in a new place with limited personal space, trying to keep spending down, while surrounding myself with objects rich in memory. I’m enjoying the opportunity to decorate all of my space in my own way, instead of having to find niches among Enrico’s family heirlooms.

I’m living in a large suburban house with a Sun colleague, Kathleen, from whom I rent two bedrooms and a bath. We share most of the house and fixtures, which saved me an enormous amount on kitchen stuff and furniture. I didn’t even have to buy beds, thanks to Kathleen (who had a single bed waiting for me, made even, the day I arrived) and Dan and Karen, who gave me a king-sized futon (which Dan delivered and carried up the stairs, bless him – the thing must weigh 200 pounds).

My furniture investment so far has been minimal: a dresser, a desk, second-hand bookshelves, and, just recently, a chair to go with the desk. It’s a pity there’s no Ikea in Colorado, but there is American Furniture Warehouse.

The Shaker desk above came from a very nice furniture place (not AFW), but was on sale cheap, probably because the drawers stick. Furniture needs to be tempered for Colorado, or the dry air can cause such problems. The prints are from my beloved Elfquest, something I’d been meaning to buy for a long time.

I wasn’t using the desk much til this week, when I finally got around to getting a chair so that, if I’m stuck working at home because of snow, I can at least be comfortable. Yes, I use two computers at once. Often I do email etc. on one while the other is processing video.

This is in my “office” room, along with the single bed and:

The painting is from/by Ross. Sue and Jack should also recognize gifts from themselves in this photo!

The larger room, in addition to the dresser shown above, contains:

This painting by Rashmi Dogra illustrates icons of Indian life common 20 years ago. She was amused that I wanted this painting – none of her usual Mumbai clients were interested in this kind of nostalgia.

Above the bed I hung a length of ikat material bought at Dilli Haat. The window treatments are curtains from an American chain with torans from a SEWA store in Delhi.

I’ve been decorating with photographs, some of friends and family:

…some travel photos that I never got around to printing before…

Thanks to Donna and Sarah for the housewarming gifts (though they don’t even know each other, they picked the same picture frame, in different colors):

^ photos from Viterbo, taking during the Imaging in Italy tour I did a few years ago. I have so many great photos from that trip…

^ these are from our visit to Jaipur

^ another piece of Indian nostalgia, this time purchased on a trip to Mumbai’s Chor Bazaar (Thieves’ Market) with Deepu. The guy in the red shirt is Amitabh Bachchan, by now the grand old man of Indian cinema. Nowadays, such an ad would be for a luxury car, not a bicycle!

I’ve still got plenty of space to fill, but am in no hurry to do so. I don’t mind the relative emptiness, and I prefer to buy things over time, making each purchase significant, not just a way to fill space. (I only bought the dresser after several months, when the lack of drawers began to seriously annoy me.) But what I do have in here already helps it feel like home.

On our way to St. Barth’s, Ross and I stayed overnight with my classmate Sarah and her husband Dave, who met playing music. They treated us to a mini bluegrass concert in their Chelsea home, which Ross captured on my digital still camera.