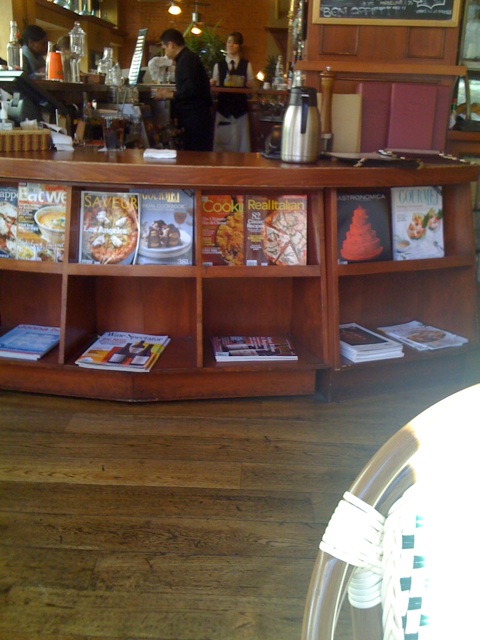 RT @zappos: Fundamentally trust is cheaper than control. –@leebryant (via @monstro) #
I think the waitress just tipped me. #
@jwillie Bares repeating? Yes, that would be memorable. #BlogMoney #sxswi #
Oh, yes, now I get it: this complete dopiness is allargies. It’s springtime already in California. #
RT @davest: King of the Geeks: http://wp.me/pkZF7-4U – there is no replacement for being face to face for getting stuff done – amen! #
Got some help translating Neapolitan in Learn Italian in Song: Tu Vuo Fa LAmericano http://bit.ly/dslziP – Thanks, Marco! #
St Patrick’s Day parade in San Francisco:

– I wonder if the real Irish wear silly hats for their parades? #
got power strip so I cd plug in the ext HD & let my Mac grind away compressing video rest of wkd But that is ALL the work I’m going to do! #
In life, what you want, what you need, what you deserve, and what you actually get are often four vastly different propositions. #
@anitaborg_org And for talking about ourselves & our accomplishments to the same degree and in the same tones as men #moregirlsintech #sxswi #
RT @almightygod: Some religions are so silly: #potatoism http://is.gd/ayif9 #
RT @MikeLaSpina: The SUN S7000 NAS ak software rel. 2010.02 now supports dedup, FC targets and many more features http://bit.ly/93Ggc4 #
Hey! I’m in the credits of this movie! Because I donated years ago to the making of Sita Sings the Blues. #
@jeffhuber You have just ruined the life of every first-slot speaker tomorrow. 😉 #sxsw #fallforwardspringback #
RT @PizzoC: France’s best-kept secret. Our eyes are up here. (via Todd) http://j.mp/co34o5 #
women must still deal with a well-entrenched double standard when it comes to gender-acceptable behavior. http://nyti.ms/arEBdS #
lunching af Coppola’s restaurant (below) – could we be any more touristy? #

@bklein34 wish I was there (was there for my 47th birthday dinner). #
Visit and chat with J&J always good to calm my twitching nerves. Glad they can deal with me running at the mouth. #
Going to see a Bollywood movie at the Castro #
@jmspool I started a blog called Usability Bitch, but my attention/career turned elsewhere. #
went to see Love Aaj Kal http://bit.ly/cireJl – funny to see a Bollywood film shot in SF. I cried. As usual. Great soundtrack,too. #
Brazilian model Giselli Monteiro becomes a Bollywood actress http://bit.ly/dzYZei #
RT @deirdresm: xkcd on pr0n. Woman after my own heart. I’ve even had this conversation recently. http://xkcd.com/714/ (NSFW) #
@deirdresm although, I have to say, the book is funny. #
@nancygandhi never lock eyes with a rhesus. They consider it aggression and may attack. Seriously. #
trying to speak with (Sun) travel agent about my BA flight on Friday, just in time for the strike. On hold, and hold, and hold… #
trying to run my normal business life in the midst of shifting to new systems adds a layer of complexity I could do without right now. #
@oraclenerd overheard #
@hypatiadotca please elaborate? 140 chars not enough in this case. #
BA cabin crew on strike during my flights to & from India. Apparently we will be served by hastily-trained BA office staff. BYOB. #
all set up and ready to film, now awaiting my three wise men (aka performance experts). #
how I spent this afternoon [filming performance experts Jim Mauro, Brendan Gregg, and Roch Bourbonnais] #

@hemantmehta depends on your pain tbreshold #
Failed to sleep this aft but dragged my carcass out to dinner anyway to meet more film techies. I think. #
No matter what conference I’m at, I’m hangin with the geeks. In this case, film post-production geeks. #
These industries are way too small, and/or j know way too many people #
Tomorrow: field trip! #
One thing I’ll say for Vegas: they do service extremely well. Everyone is so damned nice! #
RT @cwarticki: Speaking at the Chicago Customer Svcs Day tomw #Oracle http://www.oracle.com/dm/10q3field/45925_ev_cust_serv_day_apr10.html #
@italylogue the idea of a Vegas hotel as home is really scary #
You can tell a lot about the target demo graphic by the ambient music. Bit worried that it’s all the rock I grew up with. #
@alaindebotton I prefer geeks, a category in which I include myself. #
Sitting down to watch a demo at The Foundry – because I love seeing how visual effects are done, and because I really need to sit down #
Do the alien invaders ever blow up the giant Jesus statue in Rio? #
We idolize actors, but they’re such a tiny part of the film, really… #
Landed SFO. And now this is home! Yay! #
have reached the cozy sanctuary of my own home. I may not leave again until Monday, unless I really need groceries. #
Will no longer bother to note the arrant nonsense, arrogance, & stupidity of Catholic Church hierarchy. Hoist ’em with their own petards. #
RT @alaindebotton: When it finally briefly happens, happiness can feel very worrying. – umm, no, if that’s the case, you’re doing it wrong. #
Happy to be home, and happy to contemplate staying here for a while. Still feeling horrible, but at least now I can do that in my own bed. #
trying to summon the energy to walk the 2 blocks to the nearest Walgreen’s and get some necessary supplies, then back to bed. #
Building High-Quality C/C++ Applications – Oracle Solaris Video http://bit.ly/aJ3ytf – Don Kretsch presents Tech Days, Brazil, Dec 2009. #
RT @giovanni: The crowd in the Rogue SEO session at #pubcon is very quiet and shady. 😉 – are they all wearing black hats? #
FYI, I’m home sick, but you can still expect a bunch of new videos in the next few days. ’cause that’s what I do. 😉 #
Countries Beginning with I Planet Hollywood, Planet Vegas http://bit.ly/9ztpJB #
@thepartycow …or else it’s a matter of taste. 😉 #
Sneezy, coughy, dopey, and now grumpy, but not yet sleepy enough… what dwarfs am I missing? #

Conversation on a Plane