One of the things I do in my job (and my life) is social media. I’ve been communicating online since 1982, and have tried just about every major online communications tool to come along during that time, starting with CompuServe chat and BBSes in the early 80s. I began using Twitter in 2007; it has grown to be an important tool for my work as well. Yes, I do social media marketing (though I wince at the term).

As of today, I have about 1,947 followers on my personal Twitter account, @deirdres, and 583 on @JoyentSmartOS (I post technical news to both). These aren’t large numbers – plenty of famous people, non-famous people, companies, brands, organizations, and other entities, have many thousands or millions more. But I use Twitter well and get results: web traffic, attention, and sales for my employer, Joyent. Here’s a recent example that may be useful to fellow social media marketers.

My colleague Brendan Gregg is a well-known speaker on computer systems performance topics, but he’s best known – so far – in the world of Solaris, SmartOS, and company. We have worked together for years: he creates great technical content; I edit, film, and market it. On February 24th, 2013, he gave a talk at SCaLE on Linux Performance Analysis and Tools, which I went along to film. As his first talk about Linux, it presented both an opportunity and a difficulty.

Having other obligations in LA after the event, we only got back to the office on Wednesday, Feb 27th, but I had the video edited and uploaded to YouTube the morning of Friday, March 1st. By then I had also written a post and provided photos for the Joyent blog. Even by my standards, this was fast work. Why was I in such a hurry?

First, the talk had been popular: the 250-seat room was packed, with a very engaged audience who wanted to be able to re-read the presentation slide deck (dense with technical information) immediately. As is his wont, Brendan had put it up on Slideshare within an hour of finishing his talk, and announced it on Twitter:

The slide deck got lots of attention, not just the retweets shown above (some from SCaLE attendees), but hundreds more tweets and thousands of views, most of them from people who had likely never heard of Brendan or Joyent.

The hail of tweets showed the reach of the (very large) Linux community. We were already aware of this but, as a SmartOS/Solaris shop, Joyent doesn’t often get a chance to tap into it. 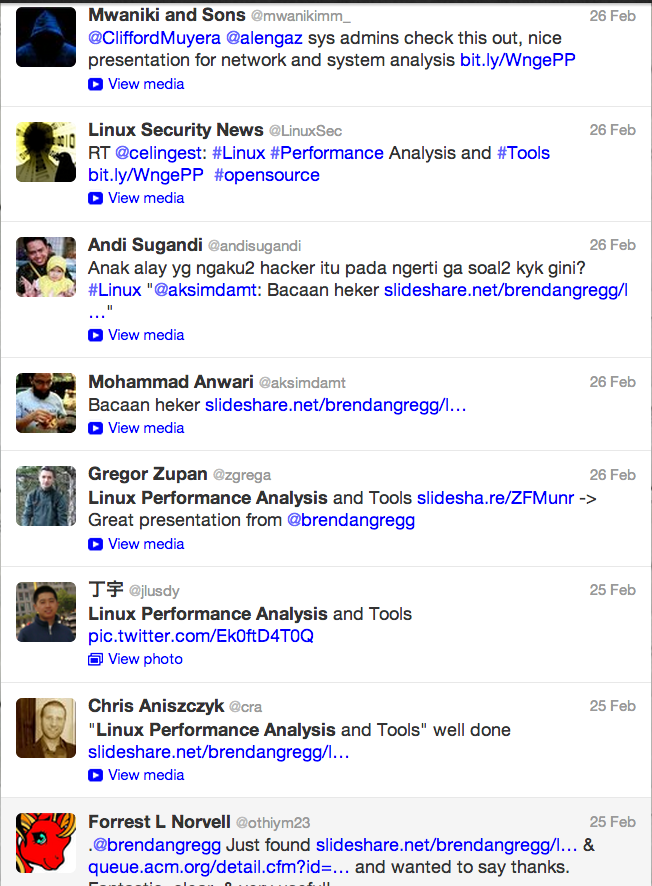 I wanted to bring some of that attention to Joyent while the talk was still fresh in the minds of attendees and others – some of whom were already asking for video. I could have just posted it on my YouTube channel and told everybody it was there, but the company would benefit more from traffic to the Joyent site – hence the blog post.

We published that post as soon as the video was uploaded, on Friday morning, March 1st. We knew that that was not an ideal time: Friday morning in California is already the weekend in most of the rest of the world. Even so, the lack of response was frustrating. I started looking for more ways to draw attention to the post.

That same day, an article was published about Oracle’s Port of DTrace on Linux. Its author – and many others – tweeted about it. Since Brendan’s talk had included DTrace as a performance analysis tool for Linux, I tried to ride that wave using the same hashtags:

I also directed a tweet at Joab Jackson, the journalist, who retweeted it:

In the meantime, I scrolled back to many of the people who had originally tweeted about Brendan’s slide deck, and tweeted to them directly, one by one: “re Linux Performance Analysis and Tools – Video available now, too! http://ow.ly/idrWY ”

I approached this with caution: in every online marketing activity I undertake, I try hard to give information only where and to whom it is likely to be welcome. In this case, no one complained, and some even thanked me for the news: “moustafa_dba 12:25pm via Twitter for iPad @DeirdreS great ,thank you so much”

But, by Saturday morning, I still wasn’t satisfied with the traffic to the blog post and the video. I had shot my bolt on Twitter. My other usual forums are mostly populated with SmartOS/illumos/Solaris folks – not the primary audience for this talk. Where could I reach other technical people?

We’d had good results on HackerNews before, so I posted it there, and tweeted about it:

Blatantly asking people to vote it up worked: the post remained in the top 11 or higher on HN’s front page for at least seven hours, and garnered some nice comments. Someone else – who perhaps saw it on HN – posted it to reddit.

These two sites drove a spike of traffic to the post on Joyent.com over the weekend: 5,768 views from HN and 4,098 from reddit.

Altogether, from March 1st to today we’ve had:

Of greater importance in the long term: by the time the post had only been up for 18 hours, it was high in Google search results for “Linux Performance”. It is now the number one result. Which is ironic and amusing, considering that Joyent’s cloud is famously built upon a different operating system, SmartOS (though we also support Linux). It also subtly demonstrates that, when Joyent claims to provide high-performance cloud infrastructure, we know what we’re talking about. Or at least Brendan Gregg does. 😉

Coda: As of March, 2014, Brendan works at Netflix, mostly on Linux performance.

What Linux Can Learn from Solaris Performance, and Vice-Versa

One thought on “A Twitter Campaign: Social Media Marketing for Tech”