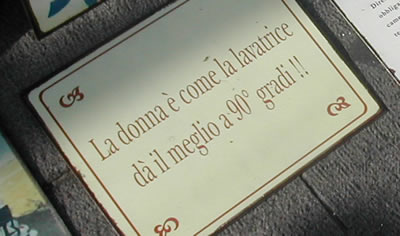 [pahk-ko] Literally “package,” but also used in the sense shown here (“Your package is in good hands”), just as it is in English.

Stare tra le palle – “to stay between the balls” is to be a pain in the butt or to be in the way or generally bothersome.

above: From an exhibition of advertising that was banned as too rude or provocative in its day.) Ikea offers to keep the kids “in the balls” while you shop.

[PALL-lay jee-RAH-tay] “To have one’s balls turned or twisted” – to be extremely irritated, either specifically or just a general bad mood.

[PALL-lay PYAY-nay] “To have one’s balls full [of x],” to be completely fed up with, sick of, unable to stand any longer.

^ image top: “A woman is like a washing machine: she gives her best at 90 degrees!”

[pair DEE-oh] By God. Not often used, at least not where I live. An old-fashioned way to make an exclamation without blaspheming is to swear by some outdated god: perdiana, perbacco, pergiove (Diana, Bacchus, Jove). Or take it to a level of abstraction with Per tutti i dindiridin!

[FAR-see OOna PEEP-pa] Literally, to jerk (oneself) off, but also used to denigrate others: Ci fa una pippa – “[We’re so much better that] he/she can just jerk us off.”

[PEER-la] Lombard/Milanese dialect for penis, but used more like “dickhead”.

[pee-ZELL-oh] Literally pea (the kind you eat), but used as cutesy slang for penis. Often used with small children, especially in the diminutive form, pisellino (little pea). Not to be confused with pisolino.

[pee-zoh-LEE-no] A nap. Often used in the phrase schiacciare un pisolino, but schiacciare means to squash – why would you squash a nap? (This is not a rude word.) 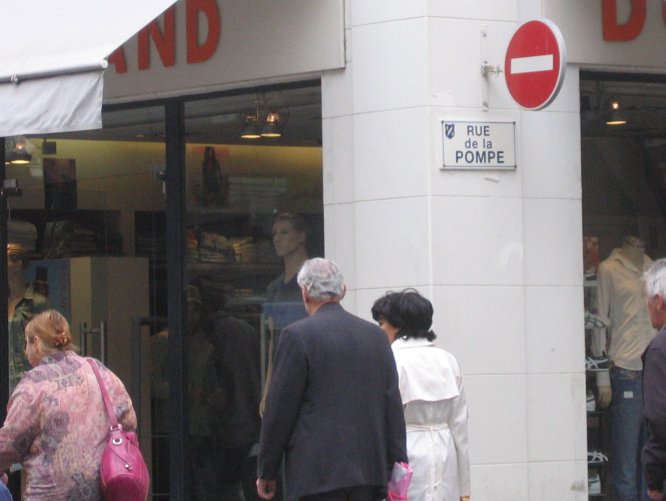 [por-CAH-tah] A swinish, disgusting act, or a big mess.

[POR-chee COM-moh-dee] Literally “comfortable pigs,” but used as “disgusting acts performed at will and at leisure.”

A polite version of some common phrases can be constructed by substituting Ella or Ulla (both meaningless) for Porca: – Ella miseria!

A semi-polite substition for porca Madonna is porca Madosca – if Madosca has a meaning (someone’s name?), I don’t know what it is.

[PRAY-zo in GEE-ro] To be “grabbed around,” to be made fun of, made a fool of, fooled. Can be used in polite company.

[pro-VAR-chee] Literally “to try to do it”, but often used as to attempt to seduce. See also rimorchiare, tacchinare.

[poot-TAHN-ah] Prostitute. Used in exclamations such as Porca puttana! and Puttana Eva! (“Eve prostitute” – that is, it’s Eve’s fault that women induce men to sin.). Pasta alla puttanesca is supposed to be a recipe developed by Rome’s streetwalkers. Figlio di puttana [FEEL-yo dee…] = son of a bitch.