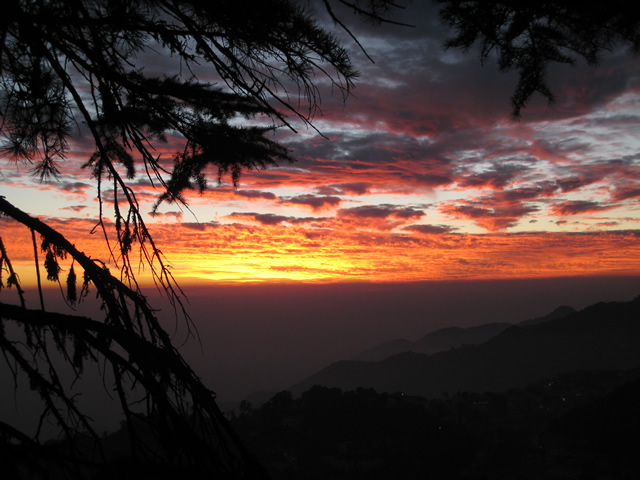 The past year was so busy that, in spite of the many articles, photos, and videos I published here, there are still travels and events that I haven’t even mentioned, video and photos you haven’t yet seen. 2008 is shaping up to be even busier so, in case I never get to those, I thought I’d do a quick gallop through 2007 and at least hint at some of the stuff you missed.

The first half of 2007 was mostly awful. But, somewhere around August, things changed drastically for the better, and I began to think of having a T-shirt made saying: “Life doesn’t suck.”

6: As a Christmas present from my dad, Ross and I, along with some of the British side of our family, saw Spamalot in London, the very last night that Tim Curry was in the cast. Fantastic! We also had our portraits taken.

14: Enrico and I took a day trip to Sormano and other points on the Lake Como peninsula above Bellagio

Ross and I were busy completing her application to Woodstock School, due March 1st. Much anxiety around this whole process, not least: wondering how I would pay for tuition.

14-19: I visited my dad in the UK again. I don’t remember now if this was because he had been in the hospital again or what. 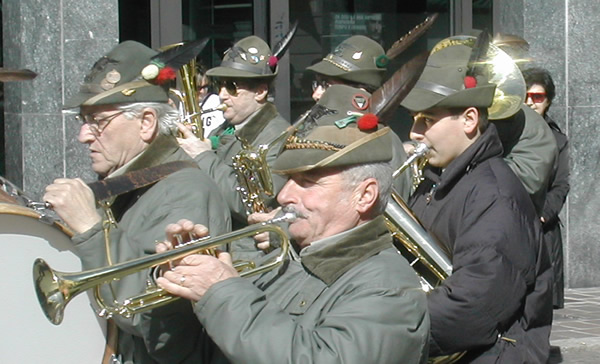 7: Attended the Cisco Expo in Milan.

20: Began working for Sun Microsystems, as a part-time contractor. First trip to Broomfield, Colorado, returning on the 28th, just in time for: 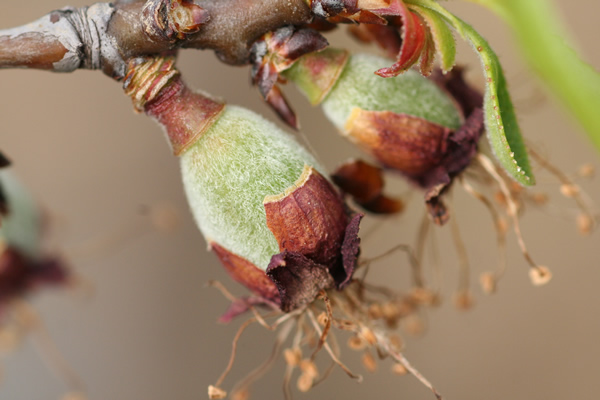 Infant apricots on the young tree in our garden. late March, 2007

Worked on my garden, held down two jobs, Ross got accepted to Woodstock (and now I knew that I could pay for it).

22: Visited Milan Design Week with Ringae Nuek. (No, that’s not her in the picture.) 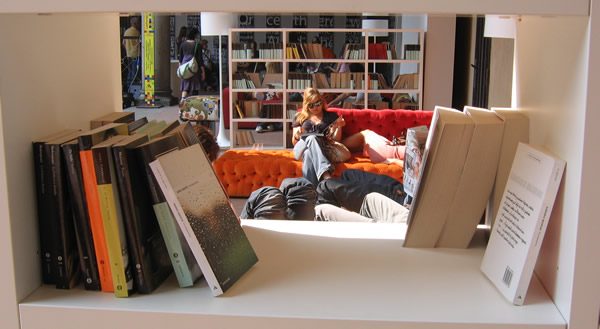 this was taken in the courtyard of Castello Sforzesco

28: Enrico and I went to the Castello di Vezio, near home on Lake Como.

15: Flew to Colorado for Sun again. Visited my classmate Tin Tin in her fly genetics lab. Returned to Italy just in time for:

Continued preparations for Ross to go to Woodstock, including getting her student visa for India.

17: Had lunch with Pamela, a Woodstock alumna, and her Swiss-Italian husband Tino at their holiday home on Lake Como.

21-25: Visited England while my dad was having knee surgery again.

Towards the end of the month, a doctor saw something she didn’t like on my mammogram, which began a period of torture and extreme anxiety. Around the same time, my mother was having an ovarian cyst the size of a grapefruit removed. Which, thankfully, turned out to be benign. 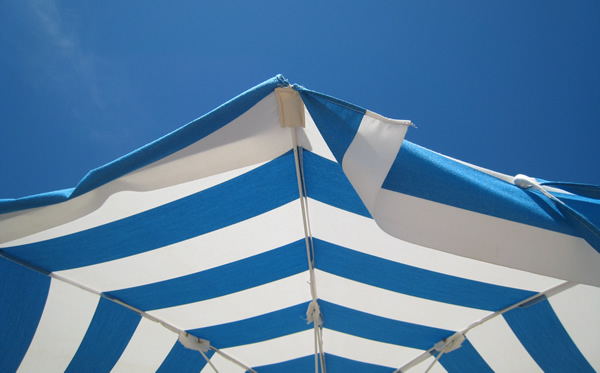 5-8: We drove down to Roseto degli Abruzzi for my mother-in-law’s 80th birthday, stopping along the way at an excellent restaurant near Modena.

11: Finally got the word on my biopsy: no cancer. The next evening, to celebrate, we had expensive cocktails with friends before we all went to see Harry Potter and the Order of the Phoenix together (in English) in Milan.

14: Had a visit from Peter and Peggy Jenks, former Woodstock staff.

21: I (and a bunch of other people) won a dinner at one of Italy’s finest restaurants, Symposium, in Le Marche, sponsored by San-Lorenzo.com. Spent the night in the nearby town of Cartoceto, which Susan and I toured the next day in intense heat.

28: Ross and I flew to London with her 46 kilos of luggage, to spend a few days with my dad and Ruth, and pre-celebrate Ross’ 18th birthday: 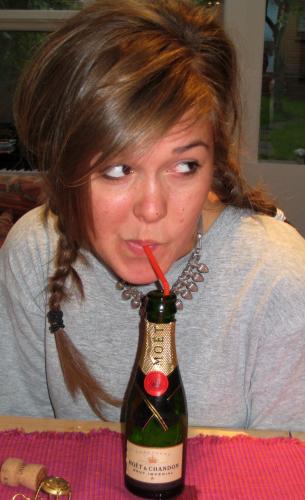 1: Ross flew out from Heathrow. Her departure did not go smoothly. But she got there safely and was happily launched on her great India adventure.

3: I flew to Colorado to spend my vacation (from TVBLOB) working for Sun, staying with Tin Tin again. 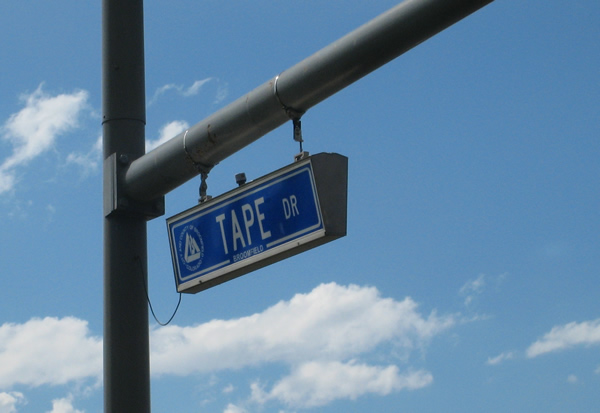 11: Ross turned 18 at Woodstock. By this time we were getting regular phone calls from her and knew that she was doing well and very happy. This was worth all the upheavals it had taken to get her there.

12: Tin Tin and I went hiking in the Rocky Mountain National Forest.

18: Sharon and I visited Santa Fe, including the Crafts Museum.

31: College friend Steph came to visit from Tulsa; we drove down to Taos by way of the Garden of the Gods.

5: Flew to San Francisco and saw many old Bay Area friends, and a few Woodstockers, before going down to San Jose, where I filmed many Sun speakers at the Storage Networking Industry Association’s Software Developer Conference (SNIA SDC).

15: Participated in a fun fundraiser in San Francisco.

17: Flew back to the UK and spent a couple of days with Dad and Ruth.

20: Flew back to Milan. By this time, I had parted ways with TVBLOB, and only had one job to do, to my considerable relief.

We had house guests as soon as I arrived: my Woodstock classmate Sara Ahmed, and long-time family friends Leslie and Nathan. While they were all with us, we visited the beautiful old abbey at Piona, towards the northern end of Lake Como.

28: Enrico and I began to enjoy the advantages of the empty nest. On a sudden invitation, we took off and spent a weekend inVenice: 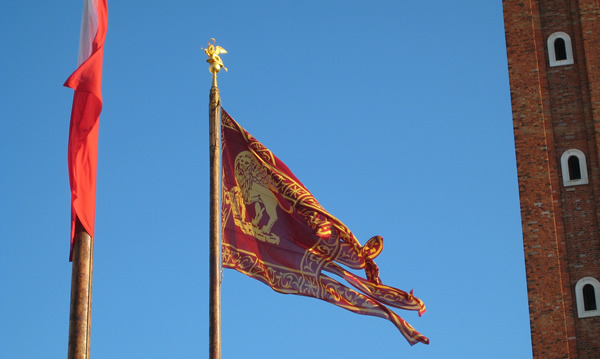 27: Enrico and I took another day trip on the lake, eating at Beccaccino (justly famous for its fish) in Sorico. 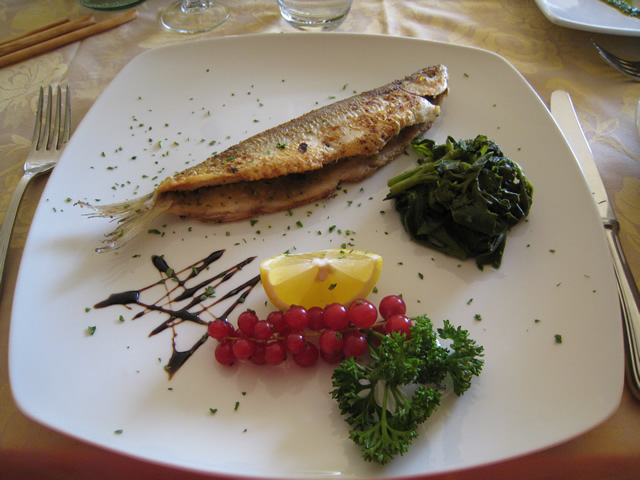 3: Enrico and I went to Lugano for eTourCamp, on the way taking the ferry across the lake:

10: My travel arrangements for India all set, we had our traditional fall dinner party a bit early.

14: Left Milan for Delhi. Arrived the same night, slept in a hotel for a few hours.

15: Took the Shatabdi Express to Dehra Dun and a taxi to Mussoorie. Wandered around the school looking for my kid til I finally met up with her on the ramp. She hugged me tight and whispered: “We’re so weird.”

16: Filmed Ross et al in a Bollywood version of “The Taming of the Shrew” – she played Bianca. 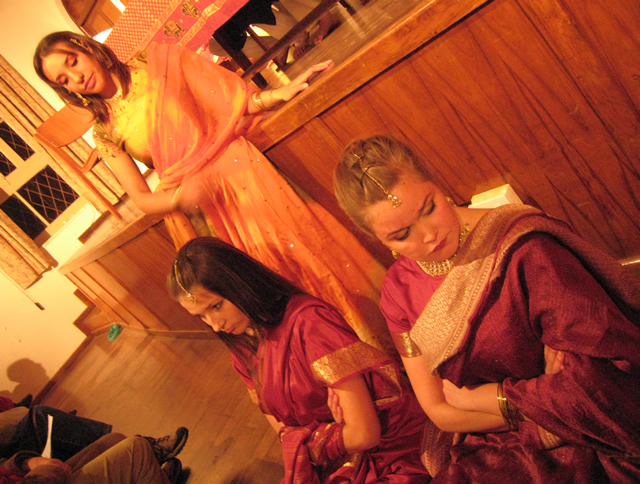 19: Pondered my past as a technical writer and my future as… what?

Wrote, photographed, and filmed lots more stuff about Woodstock, spent intense times with many old and new friends, all the while working remotely for Sun.

14: Ross and I, alongside a school party of 200 kids plus chaperones, went down to Delhi at the start of our winter vacation.

^Â I have not tried dragan (dragon?) fruit yet – never heard of it before. Note the strawberries, cherries, and plums – none of these were available in India a few years ago.

19: We flew to Mumbai, where we spent another intense period shopping for a sari, seeing many old friends (mine), and meeting movie stars. And I bought art: 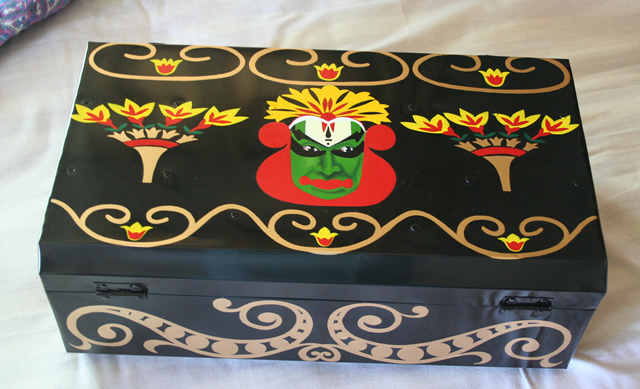 ^ a piece by artist Rashmi Dogra – a tin valise, with a Kathakali dancer’s face – this was my Christmas present for me!

31: Arrived in Milan, Enrico picked me up at the airport. After a few hours at home to rest and unpack, we drove up to a place in the mountains where friends were staying, to celebrate New Year’s with them. I made it through dinner, but slept through the traditional midnight feast of lentils – and slept through 25 people partying in the room next door, and fireworks going off in the street outsidehttps://www.beginningwithi.com.

And I think that’s about enough for one year!