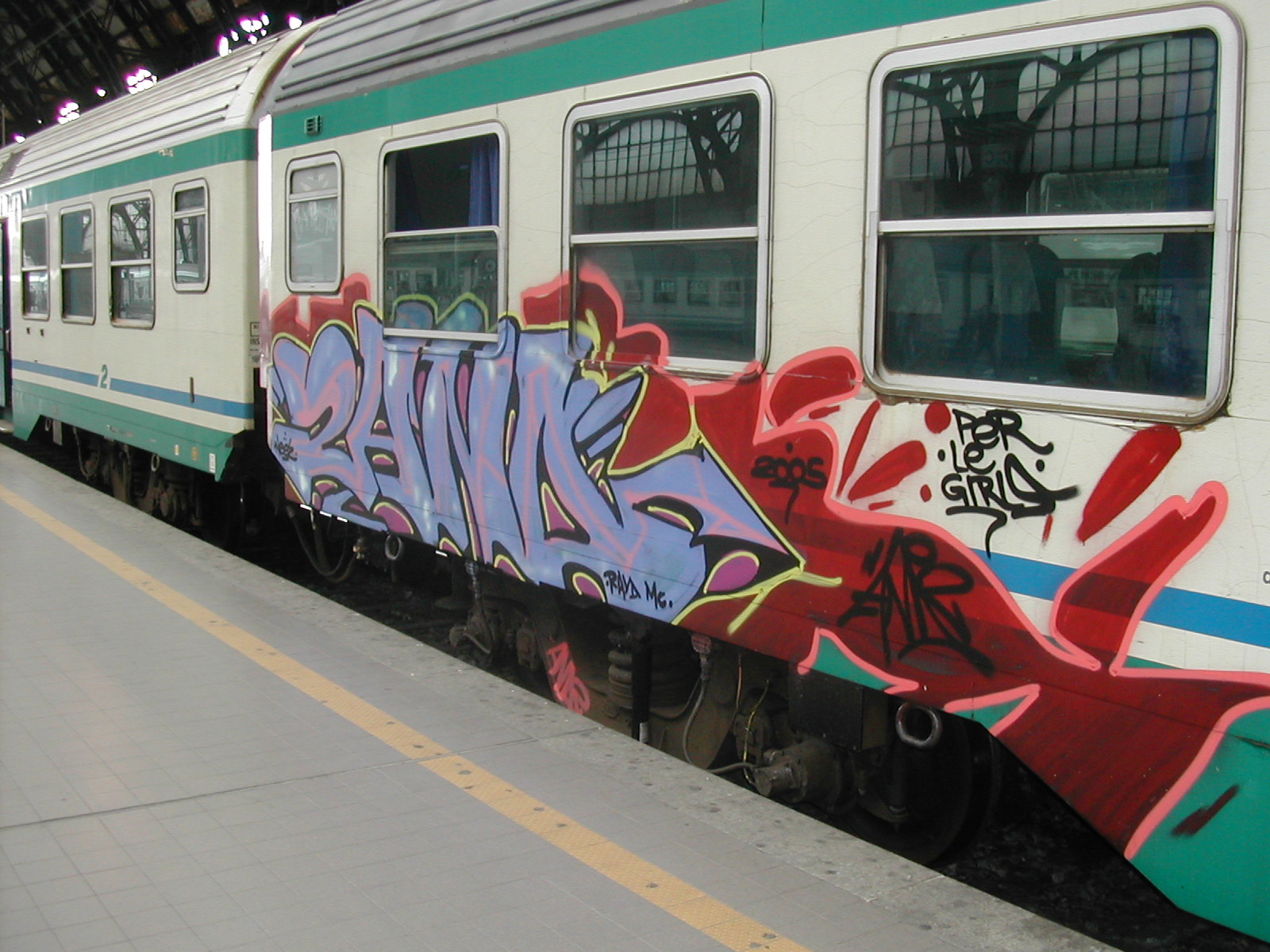 [BAHL-lay] Balls. Usually synonymous with “Bullshit!” Mi ha raccontato un sacco di balle – “He/she told me a whole bunch of lies” (literally, “a bag of balls”). Can also be used like palle. Che due balle/palle – “What two balls” – can also be used like “What a pain in the ass.”

[bar-BONE-ay] “Having a big beard”, but also used for homeless men.

“So?” or “So what?” In some parts of Italy, this may be equivalent to boh. Not particularly rude.

A verbal shrug. This isn’t rude – you can use it any time.

[BOT-ta] A blow, a punch, a coup, but also used to mean a dose of cocaine. Hence in botta is used to mean high (but not necessarily specifically on cocaine).

In Roman slang, botta or bottarella means a fuck. Le ho dato una bottarella – “I fucked her [a little].” 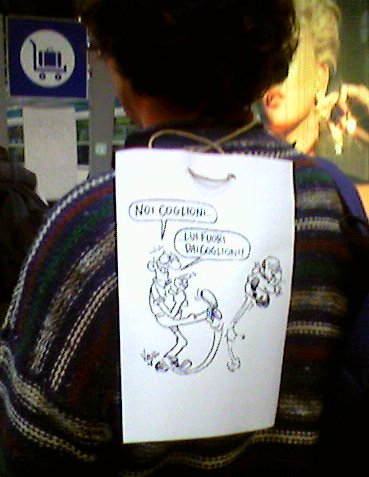 [KAHK-yo] A mild replacement for cazzo.

[cah-GAH-ta] A shit, used of a worthless event or action or object. Can be used similarly to minchiata or cazzata : Ho fatto una vera cagata (I did something hugely stupid).

[CAHN-na] Literally a cane, as in bamboo, but used for a joint/reefer/ doobie – a marijuana cigarette (for which I don’t know the current American slang!).

Not to be confused with casino’ (the accent on the final o indicates that the stress is on that syllable, so pronounce it [cah-zee-NO]). This means casino in the American sense – a place where you gamble.

[CAH-voh-low] Literally, cabbage. Used as a mild replacement for cazzo: Non si sa che cavolo vuole (“No one knows what the heck he wants”).

[CAHTZ-a-roll-a] Another mild replacement for cazzo, used when you realize in the middle of the phrase that you shouldn’t say cazzo in present company. The Italian equivalent of using “frick” for “fuck”.

[CAHT-zoh] The quintessential Italian swearword, the one you’ll probably hear most often. A vulgar term for penis, but used in many contexts much as “fuck” is used in English:

[… doro] “The golden prick.” Said of a man who marries money by dint of his sexual prowess, at which point he can attaccare il cappello.

[KYAHP-pay] Butt cheeks. Often used in muovere le chiappe – move your butt, get a move on. Or alzare le chiappe – lift your butt up (out of that chair and do something). Chiappe can be used as a politer substitution for culo. It can also be a surname!

[CHESS-oh] A rude word for toilet, but also used to describe a very disgusting place or a very ugly woman.

[chih-TROOL-oh] Derived from cetriolo (cucumber) – used of somone large, lumpy, and rather flavorless/dense. You can use this in polite company – just don’t let the person you’re referring to hear you!

[coal-YONE-ay] A vulgar term for testicle, but also used to mean idiot (Che coglione! – “What an idiot!”). Apr 5, 2006 – Used in this sense by Berlusconi to define people who intended to vote against him in the recent election (which he lost, barely). Il Corriere della Sera translates coglione as “dickhead.”

[KOTZ-ah] Literally, “mussel” (shellfish), but used for an ugly woman. Funny that there’s no equivalent for a really ugly guy…

[AHL-lay KOTZ-ay] Literally “at the mussels” (as in the mollusk you eat), but used to mean exhausted, done in, or in a mess. (This phrase is not particularly rude – nobody’s shocked by shellfish. Unless maybe it means “only ugly women are left at this party” or something to that effect.)

[KROOK-kee] A nasty word for Germans, exactly like “Krauts” in English. (I’m sure they have their own nasty words for Italians…)

[cool-laht-TONE-ay] Derived from culo, roughly translates as ass bandit. A rude word for a gay man.

[COOL-oh] Ass or asshole, but also used to mean luck. Che culo! therefore does not mean “What an ass!” but “What luck!” or “You’re so lucky!”

Also used in Gli faremo un culo cosi’ – “We’ll make them an asshole this big” (with hands held apart to show just how big): “We’ll rip them a new one.”

Mettilo nel culo – “Put it in your ass”, similar to vaffanculo, is equivalent to the American “Shove it”. 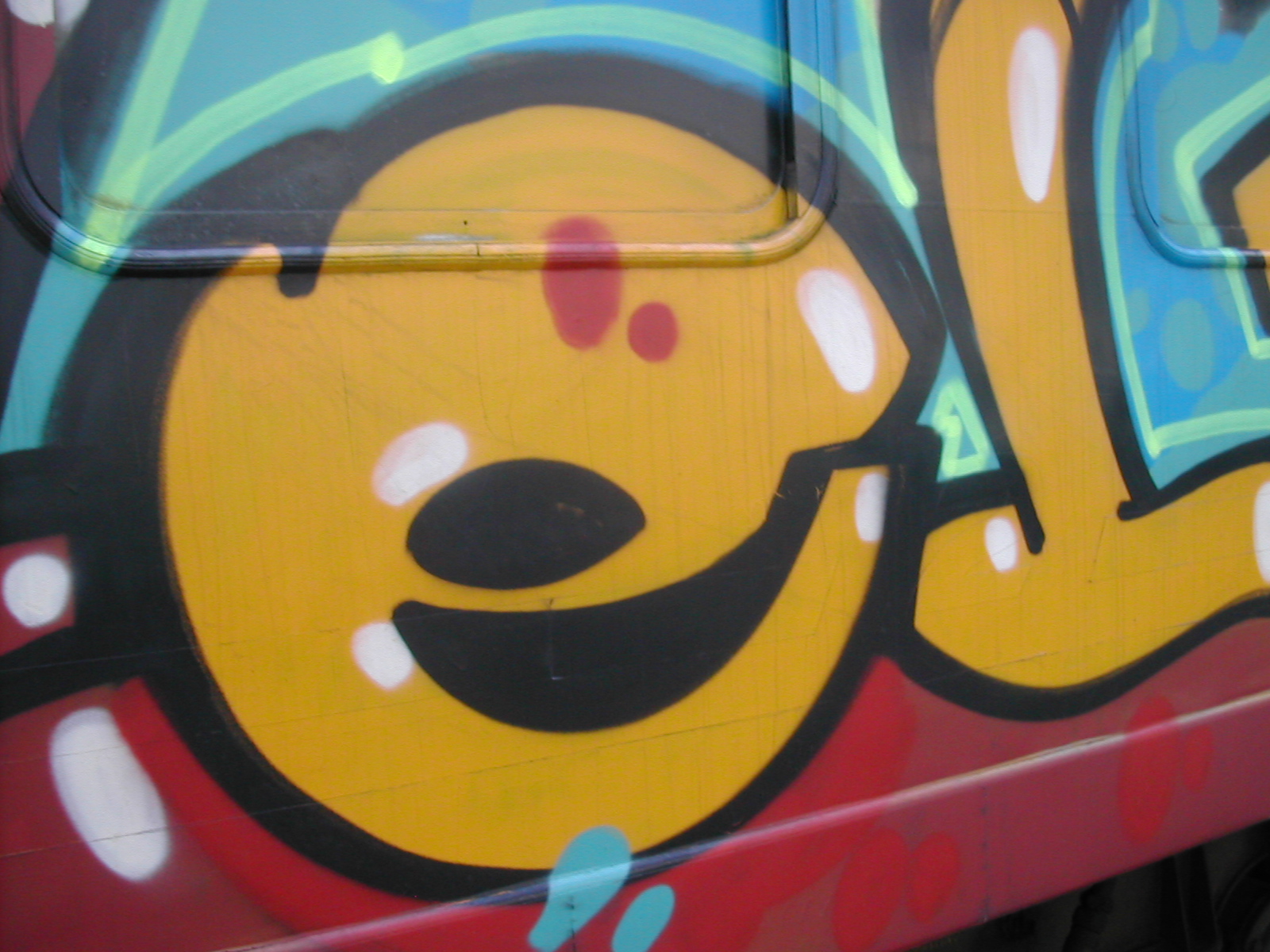 [AIR-ba] Grass, as in your lawn, but also used for marijuana, exactly as in English. 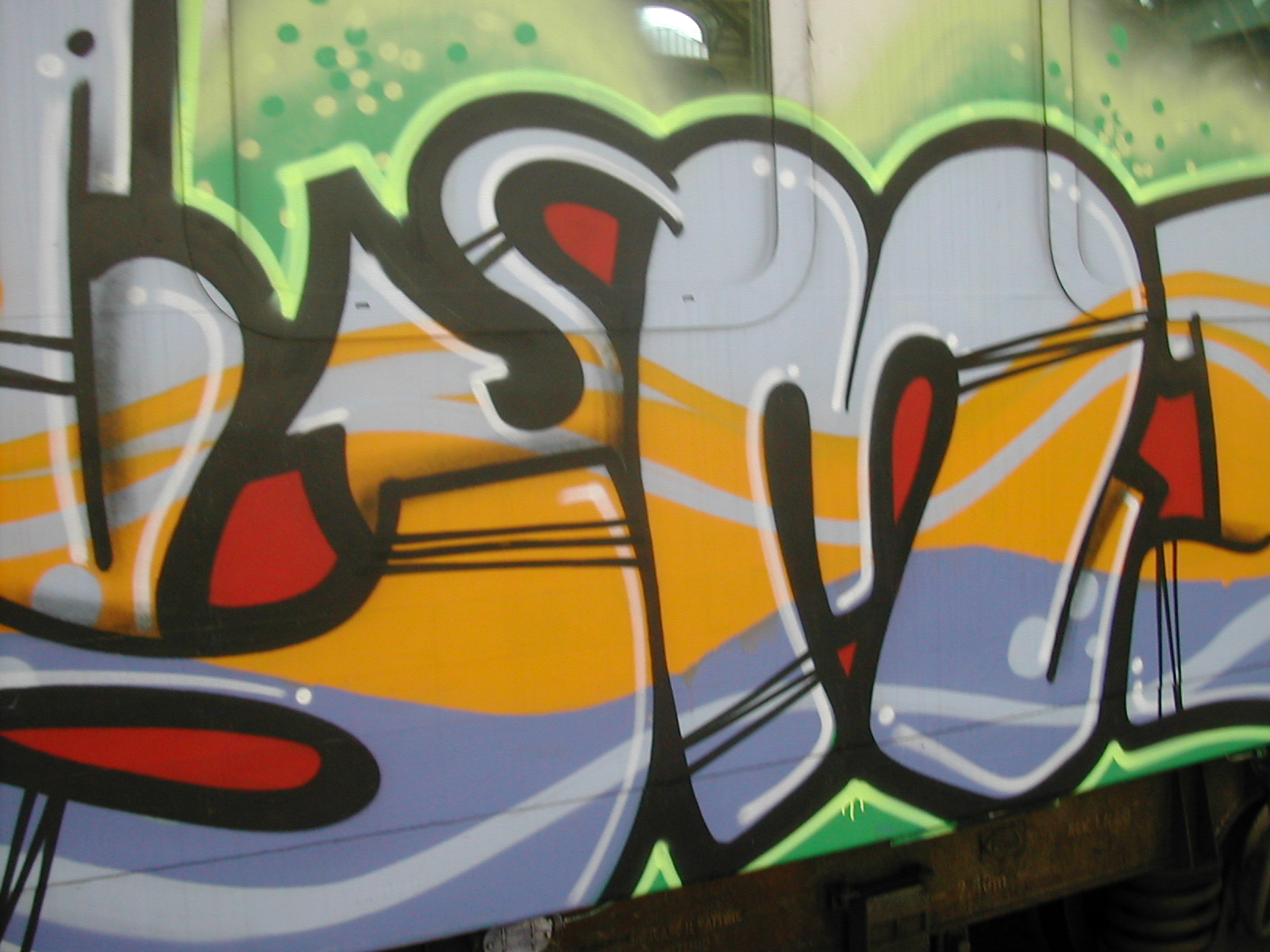 [fahn-cahz-ZEES-tah] Someone who doesn’t do shit; derived from cazzo.

Can also be used with reference to doing drugs.

[FAHT-tone-ay] Stoner. Probably derived from the fact that fatto (literally, “done”) is used to mean “stoned”. The female equivalent is fattona.

[FEE-ca] Cunt. Of course, there are many other words for it. Not to be confused with fico – fig.

[feek-KAR-ay] To put something into something. You can use this in polite company in this way, however:

[FEE-ga di LAIN-yo / doro] “Cunt of wood/gold.” Used of a woman who gives herself airs, as if Pensa di averla solo lei – “She thinks she’s the only woman to have one.”

[FEE-go] Adjective – Used to mean good-looking, like the American “hot,” hence also figone – a male hottie. (I guess the female equivalent would be figona, but that doesn’t seem to be used, probably because it would also mean “big cunt”. Use, instead, bella figa – “beautiful cunt”.) Figo is also used in the American sense of “cool” – Che figo! “That’s so cool!” Also strafigo – way hot. Also farsi fighe/i – to make oneself hot, get dressed up, act cool.

Here’s a whole song about being figo.

[fon-DEL-li, pray-zo pair ee] Grabbed/held by the short hairs. While in English this used metaphorically to mean you are in a situation you have no control over, in Italian it means you’ve been (metaphorically) screwed.

[FOT-ter-ray] To fuck. Most often used in Siamo fottuti – “We’re fucked,” which exactly reflects the American sense of that phrase. You can also use Non me ne fotte niente, just like Non me ne frega niente, or, ruder still, Non me ne fotte un cazzo.

[freh-GAR-ay] To cheat (somebody). One of the most commonly-used words in the Italian language – which tells you something. Not rude – you can use this anytime.

[FRESS-co] Adjective meaning “fresh” or “cool”, e.g. una bibita fresca – “a cool drink.” This usage is not slang. However, al fresco is slang for “in prison” – similar to the somewhat antique English usage “in the cooler.” So Italians do NOT speak of “dining al fresco,” and might wonder what you mean by it.

[FRIK-ket-TONE-ay] A term dating back to the 1960s (and no longer in popular use) for a long-haired hippie freak, probably derived from the English freak plus the Italian ending -one meaning “great big”.

[FROH-cho] Rude term for a gay man. July 18, 2006 – The Italian Court of Cassation has ruled it a crime to use this term pejoratively. (I don’t know how else you would use it. While in the US “queer” is acceptable when used by one gay person of or to another, this is not true of frocio in Italy.)

A degenerate American form of vaffanculo.

[FOOR-boh] As an adjective, “clever” or “sly,” or used as a noun applied to a person or action having those qualities. This word is not particularly rude, in fact, many Italians pride themselves on their furbizia (slyness, knack for getting away with things) and, when not the direct victims of a ripoff, may admiringly state that someone else has been furbo. Plural is furbi. 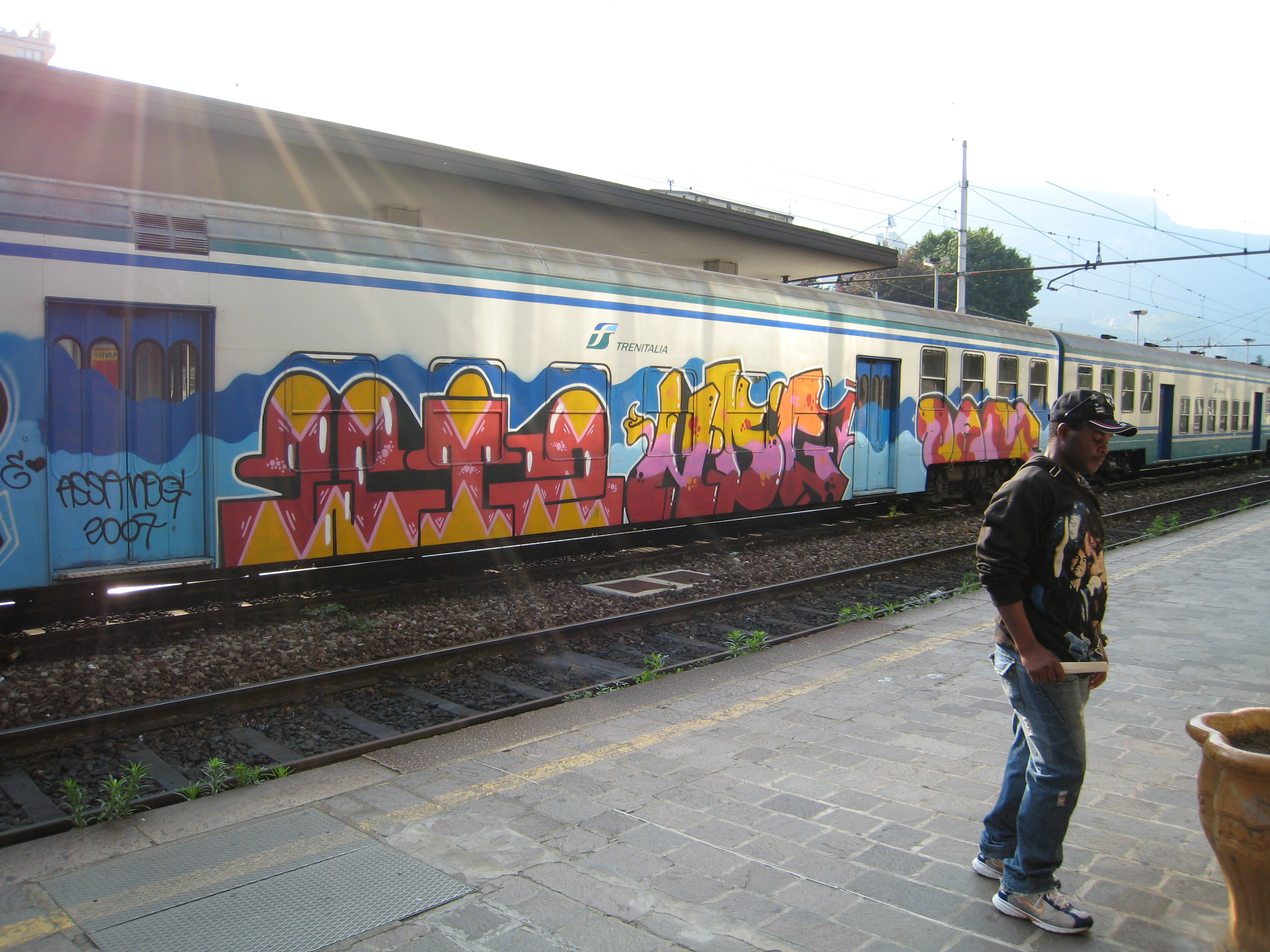 [in-coo-LAHR-ay] To put into (someone’s ass) . Used like to (figuratively) screw someone (to cheat, trick, get the better of in a nasty way). See culo (ass) and fare un culo cosi’.